A volleyball is a team sports game played among 12 players with 6 on each team. It was originally called “Mintonette” and was invented by William G. Morgan in 1895. Over the course of time, the game has evolved into something much bigger. It is now considered one of the most fan-favorite sports. And there are several competitions and championship tournaments happening all over the world.

For volleyball fans like you and me, we don’t get time to play outdoor sports other than weekends. The very unique way to enjoy this game is to play in your smartphones. Yes, there are multiple volleyball games available on Android and iPhone. I know these games won’t add anything to your health, but what could be the most interactive way to enjoy a good game? 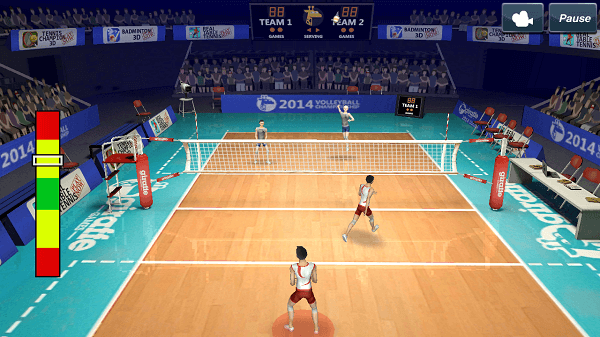 Start the game by selecting your avatar by choosing skin color, change hair direction, eye color, and shirt. This game gives you some decent amount of customization. Some of the customization items are free. For the other customizations, you have to buy them with coins, which need an In-App purchase.

On the home screen at the right side, you can track your daily upgrades on Training, like improvements on Defence, Attack, Speed, and Serve. It also shows you about your teammate and coach. You don’t initially get a coach, you need to hire one by spending some coins which you have to buy as already mentioned before. Complete a few challenges to unlock new skills.

There are seasons in career mode, each season comprises of certain games. Complete each season to reach the next one. To enter into a match you get an option at the bottom right side which also gives you information about which team you’re going to play against. 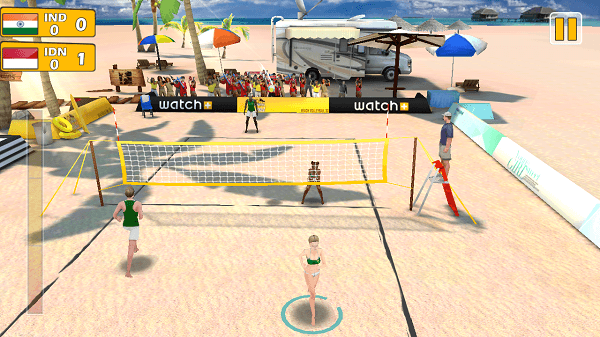 Beach Volleyball is played all over the world. It ranks 4th in the most popular beach sports, after Surfing, Scuba Diving, and Beach Soccer. The game is played by two teams of two players each with best of three set. Same rule as the original one applies to this game as well. Therefore whichever team makes the 3 complete point wins.

As you launch the game, you get to select your avatar. Either choose a male or a female character, then select your country. Each country has different variations in Attack, Defense, Speed, and Accuracy, so choose wisely. After that, you can start playing a game by selecting next, it will take you to a new window called levels. Each level represents 5 set of matches, complete them to move to the next level. You have a total of 5 levels in the game.

Other than these challenges you can also go for quick matches to play randomly. The visuals are great and you get total manual control over your serves. You can also choose from the 4 modes of difficulty, these are easy, normal, difficult, and legend in the quick match option. 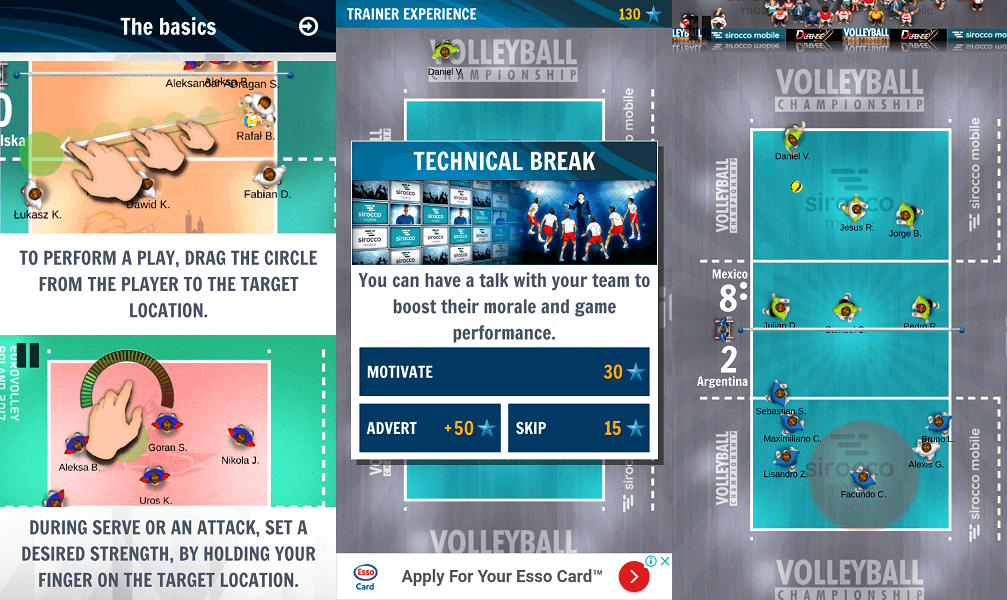 This game represents the traditional 6 vs 6 match mode. It does not have 3D graphics detailing but the gameplay is fun. You don’t play as an individual player but you control the whole team.

As you enter the game, you get to play a tournament. The tournament features a national cup for which 36 teams compete and the loser drops out. A quick match is also available where you can play with a random team to improve your skills.

Volleyball is a team sport and this is the key role to play the game. One wrong move and you lose a score. The game has introduced a drag quality circle mechanism to play. It provides fast movements and great control to the players to serve, pass or smash the ball.

In the gameplay, you need to drag the circle under the player with your finger in the desired direction to pass the ball. The game provides you with a detailed tutorial at the beginning which is very helpful. You can access the tutorial again from the homepage using the Tutorial option. It also allows you to make changes to your team, you can replace any member of your team and motivate them as well. 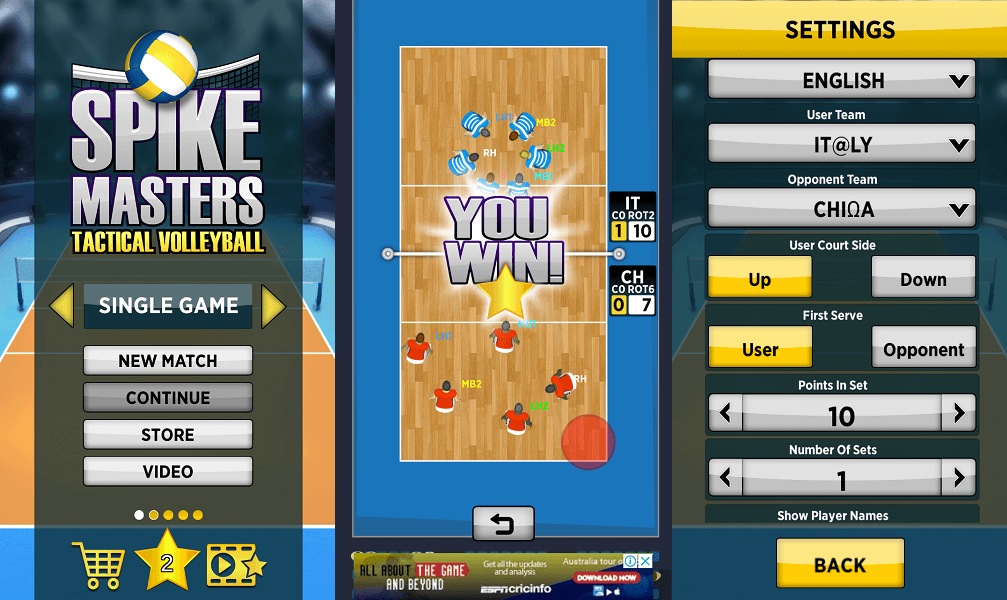 If you are searching for the best indoor volleyball game, then this might be it. Made with unity engine, It lets you play a 6 vs 6 match with player position, team rotation, attack and defense strategies.

As you launch the app, it shows you a tutorial on how to play the game. You get several options like Misc, Single game, Tournament, Teams, and Statistic for the gameplay. In the misc, you get the settings option and how to play. The settings give you the option to change the language and set your courtside, you can also set the first serve option. Other than this you can choose the number of points associated with the sets. You can also enable player names, shadows effects, select the ball type and the court.

While going for a single match you can again choose your team and the opponent team, courtside, first serve and set the maximum points. In the tournament, you can set your team, the no. of teams allowed and set maximum points for each game. 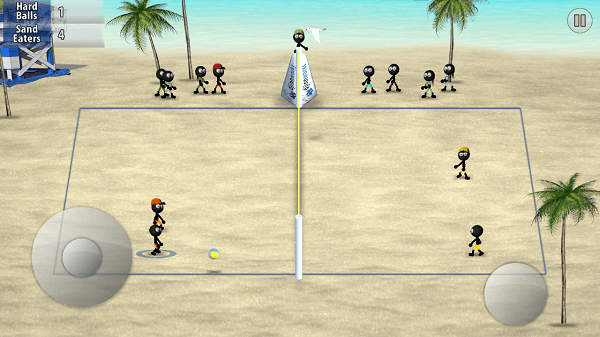 This game is another version of the beach volleyball with stickmen in it. The gameplay is smooth and the graphics are quite fancy. Select to play the games and you’ll be redirected to a new window with various game modes. There are Training, Quick game and other locked modes like outer space mode, and various seasons and tournaments. These modes can also be unlocked by some ads.

Before the game, you can check out the training mode to learn about the gameplay. You get complete manual control over the players for movement, service, and pass. Again to play a game in Quick match you need to watch ads to unlock the maps. These ads are the major drawback of the application. For every playing option, you need to watch ads. You can also watch 3 consecutive video ads to disable them for 1 hour. There is also an also option to do an in-app purchase to remove the ads if you want. 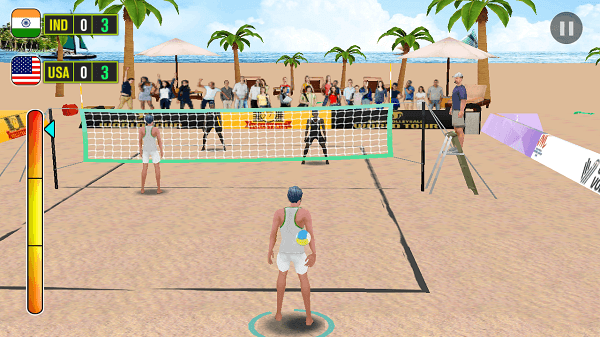 This game is created using Unity Engine and provides some quality realistic graphics and good intuitive controls. In the beginning, you have to develop your character for the game. You can select a Male or a Female one and then select the country. Please note that your power and agility will depend on what country you choose. Once you’re done you cannot revert the character.

Now, as you start the game by selecting Next, you will be redirected to another window which will show your progress. The option will provide you with the map location which consists of 5 levels, each level has 5 different matches. Select a match and start the game. In the match, you get a 2 vs 2 matches and it is typically a beach volleyball game. It provides you with manual control over the character like smashing, serving and passing. Swipe your finger over the character to send the ball in the desired location. 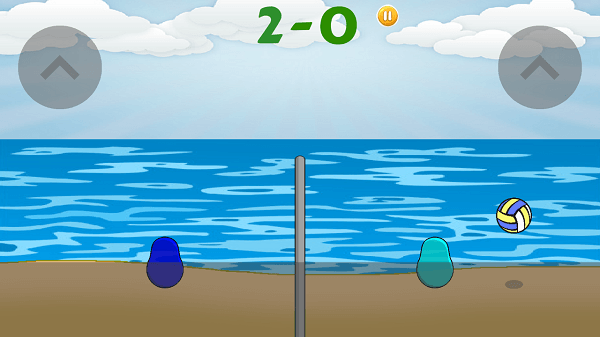 A very lightweight 2D game where visuals are good and the gameplay is fairly easy. It is a beach volleyball themed game. Start the app and you’ll get two options, you can either play as a single player or in dual player mode. Single player allows you to play with AI and while in the dual player mode you can play with your friend.

The game does not allow you to play in a 2 man team but rather has bean-shaped characters which you can drag and make it jump to smash the ball to the other part of the court. If your opponent misses passing the ball, you make a score. Other than that you can select the color of the bean, side of the court, AI’s skill level, and select the match length by setting maximum points. The highest score points you can set up is 15. 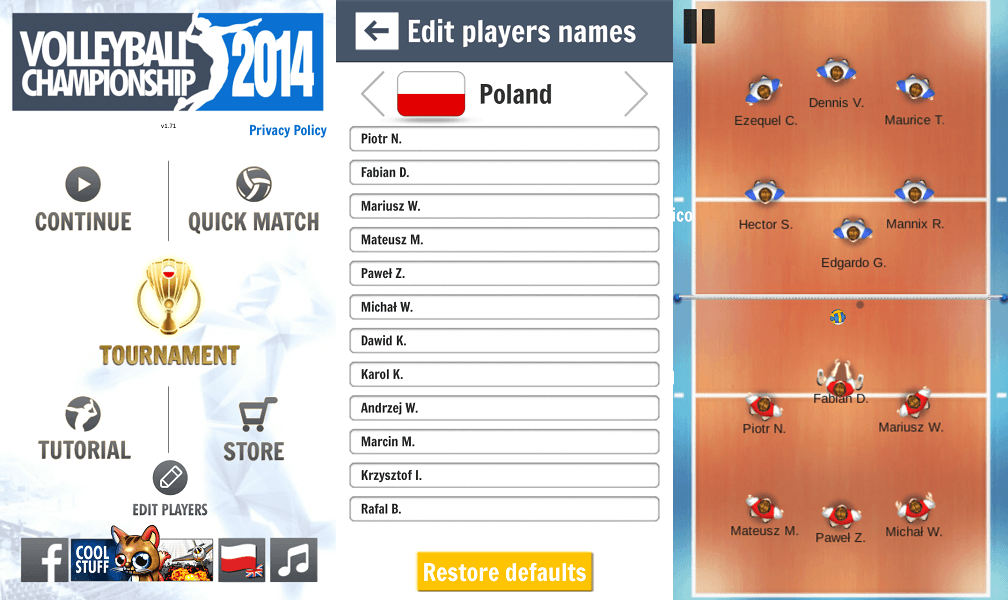 It is a fullscale world championship tournament of men’s volleyball. This game gives you a 6 vs 6 player gaming mode. The homepage has 6 different options, with continue, you can start a suspended match from before that you might have saved and exited. Quick match option is locked you have to do an in-app purchase to unlock it and remove ads. You get Tutorial while starting the game, it gives you an idea of how to play the game. It also lets you change the player’s name for the team in the Edit players option.

Taping the Tournament option takes you straight to the game options. Choosing your difficulty will give you the next option of selecting match length. The match length is determined by the no. of points you choose in the game. Short has 10 pts, Medium has 16 pts and Real has 25pts. Next, you select your team, you have 24 teams to choose from. You only get to play with Poland, the other teams are unlocked until you do the purchasing.

The gameplay uses the same drag quality circle mechanism as in Volleyball Championship. Drag the circle underneath the player to pass or smash the ball to your teammate and opponents respectively. 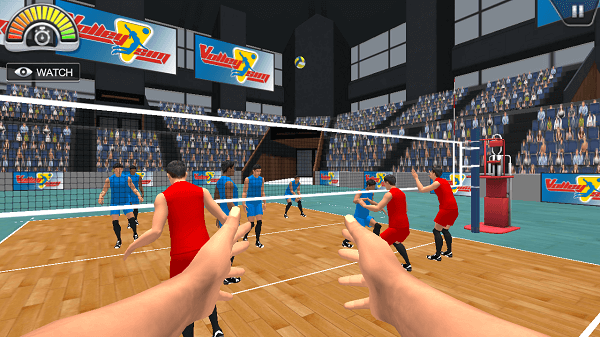 If you’re associated with a volleyball team and take it seriously, this game will work as a best visual training simulator to learn about the game. You get a nice First Person view of the whole court which provides good accuracy to the gameplay. It can be used by coaches and athletes to develop potential improvements in decision making.

As you launch the app, you get the main menu which doesn’t have many options. Select the settings in the right bottom corner to make changes to the game. You can change the avatar like gender, height and skin color. it also allows making changes to team uniforms and the court as well.

You will be asked to choose a position, without the in-app purchase you can only opt for the LB (left blocker) position. There is a simulation where you need to choose out of 4 modes to start the game. You get Practice, Best out of 10, Double or Nothing, and Challenge modes.

A good game of volleyball is better to enjoy outdoor with your friends and family. It will add to your health and build up your stamina. On the contrary, these smartphone volleyball games are fun and let you play and enjoy when you are alone. Download these games to have a good time and do mention your experience in the comment section. If you think we missed out a game do mention it too.