Have you ever wanted to fly a plane? I have. And I am sure it must be the dream of most of the people out there. Flying a plane is not a real option unless you pursue the training for it and that’s not what everyone can do. But you can still enjoy the thrill of controlling an airplane just from your smartphones. There are different kinds of flight simulators available for Android and iPhone with which you can fly a plane or even fight with it. In this article, we have made a list of some of the best flight simulator games that you can download and enjoy on your smartphones. So, let’s have a look at them. 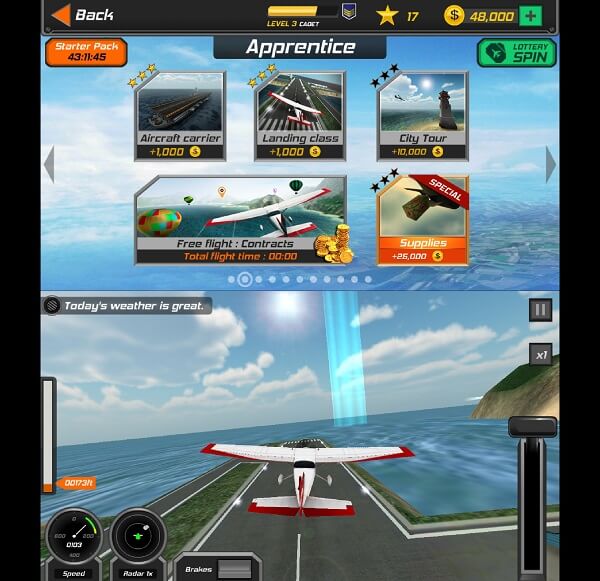 With this flight simulator app, you will get to fly and control various kinds of airplanes. There are missions and tasks in the game which you can finish with the help of required planes. You can go to the rescue missions, race other planes and many other objective-based levels. As you progress, it will teach you new techniques of flying the planes, unlock new kinds of airplanes and earn coins which you can use to buy them. You just have to tilt the device in the required direction to steer or drive the plane. For the plane’s speed and navigation info, there are onscreen indicators and buttons as well. 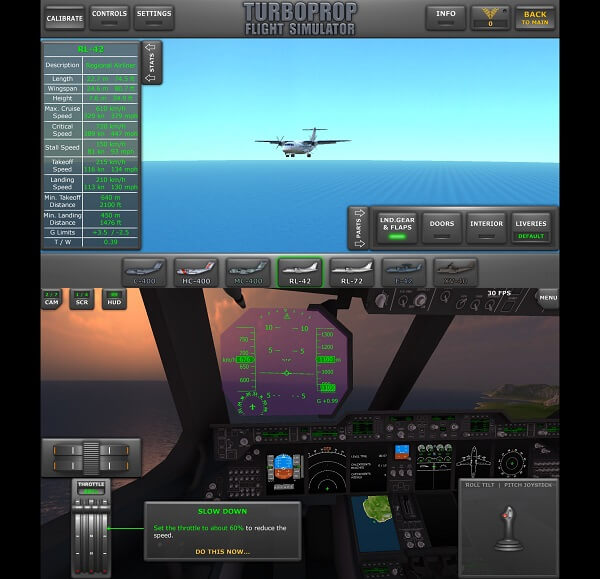 Just like the above game, Turboprop will let you control and fly various kinds of airplanes. But here you will get more of the planes, some of them are even real planes and you can have the information about them. This is one of the best airplane games as it has real like plane controls and you can even switch the camera to fly with various camera positions for e.g. inside the cockpit. Here you will get to clear various missions or even fly freely just to enjoy. This game will provide you with tutorials and training to learn the methods of how to fly the planes and use the given controls. 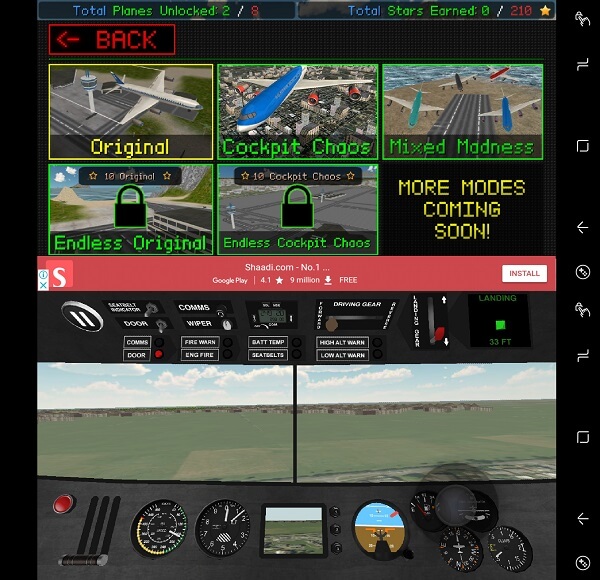 Fly Plane will let you have the experience of flying a passenger aircraft with simple onscreen controls. This game has various modes like Orignal, Cockpit Chaos, Mixed Madness etc. In these modes, you can learn to fly the plane and complete various landing tasks in different situations. This game does not have much to offer in controls, but in the cockpit mode, you will get some real like flying experience. While playing the game, it will guide and teach you how to control or use various buttons to start and fly the planes. 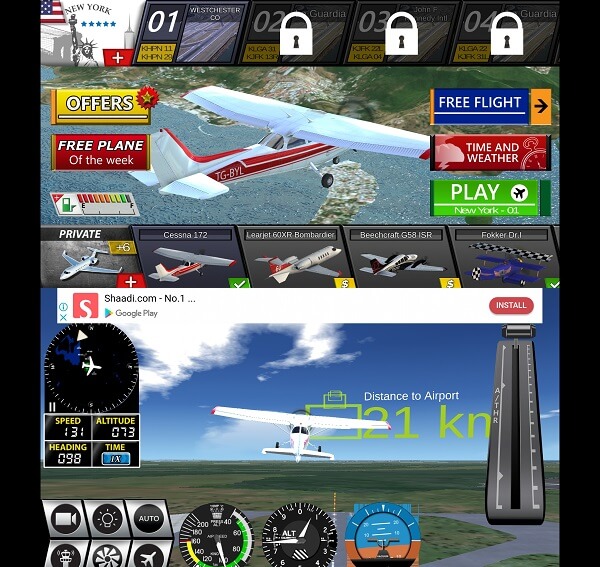 Flight simulator X can be called as the mobile version of Microsoft flight simulator by a different developer. In this game, you will get to fly various kinds of planes and complete the missions in different locations like New York, Sydney, Chicago, and many others. There are private, commercial, military, cargo and special planes that you can use to fly in the missions. As you progress in the game it will unlock new levels, missions, and planes or you can also buy them using in-app purchases. This flight simulator game app is only available on Android platforms. 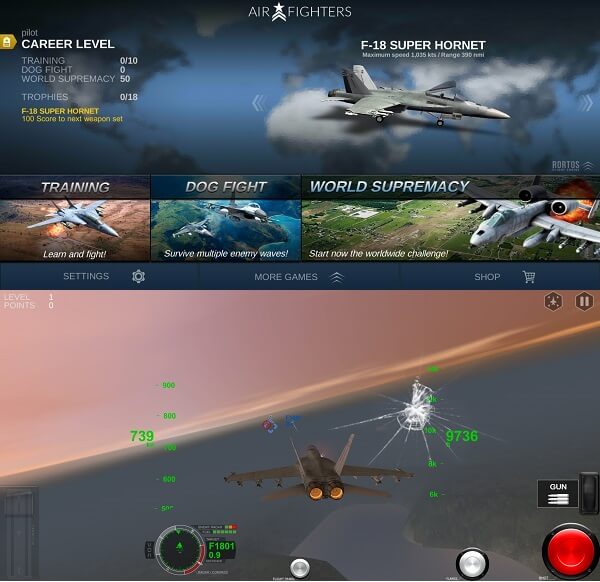 This is a fighter plane game for Android and iOS devices. Here you will get to control a fighter plane and complete various missions like destroying targets or fighting with other fighter planes. There are some real fighter planes like F18 Super Hornet, A-6 INTRUDER and many more that you can unlock and play with as you progress in the game. You will also get different weapons with the planes that you can use to fight or complete the tasks. The controls are very simple, tilt the device to give directions, and use onscreen buttons to fire or control the speed of the plane. 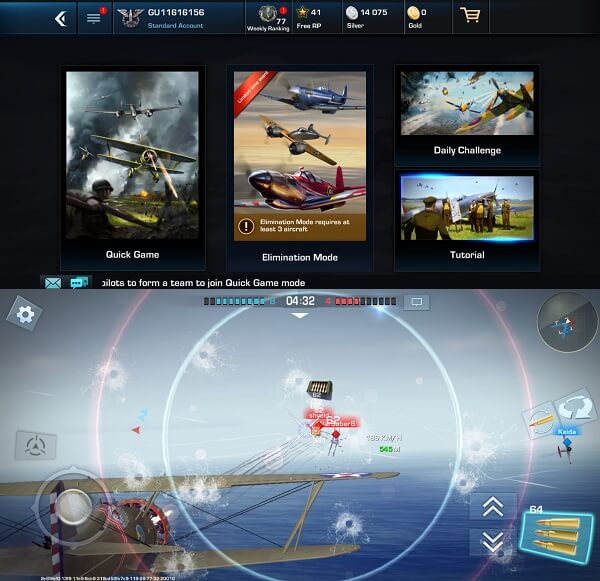 This is one of the best fighter plane games available to download for free on both the platforms. This is not any simulator, but a fighting game where you will fly and control fighter planes. And not only this it is an online multiplayer game where you can play matches with up to 4 people in a team vs other teams. In this game, you can select the country that you want to represent.

And the fighter planes ranges from old to new with real fighter planes also included. There are game modes like the quick game and elimination mode with daily challenges and tutorials in case you need it. Perform air stunts and defeat the opponents for earning credits to increase your experience in the game and buy new upgrades for the planes. 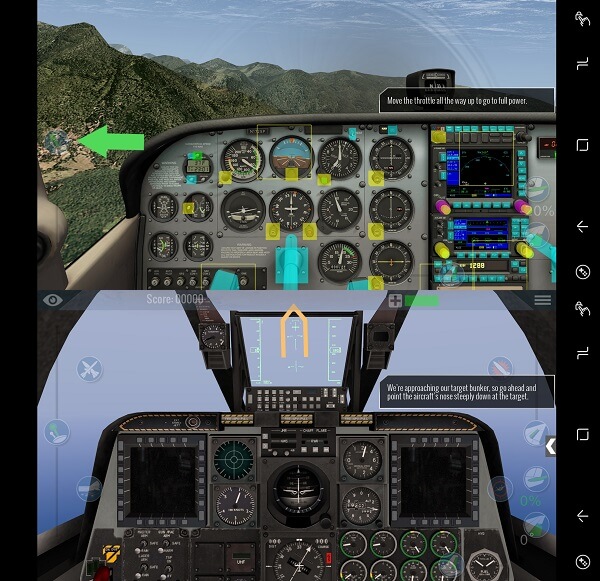 X-Plane is the best flight simulator game in the list as it has some real controls, great graphics and one of the best simulation of flights. You will get to experience real flying right from the cockpit driving seat with the view of the surroundings. The dashboard of the plane will also show real controls, speed, and buttons that you can tap to use accordingly.

Here you can learn to pilot the planes in flight school, take challenges to complete various objectives or fly freely in free flight. Not only this it also has fighter planes and challenges regarding them that you can play with. In short, this is not just a game but a perfect flight simulation app that consists the features of almost all the other games in this list.

Also Read: 11 Best Stickman Games For Android You Can Play