Are you new to Snapchat or it might be possible that you have been using it for some time now but still don’t know what those smiley face, red/yellow heart or fire emojis mean. Snapchat has been a unique messaging app because of its face filters and other cool stickers like temperature, time, speed and more. Apart from that, Snapchat shows emojis next to your friend’s names. They are not random or meaningless instead they are shown because of a reason. So, here we are with this article to reveal Snapchat Emoji meanings.

What Do The Snapchat Emojis Mean?

Here we have tried to cover all the Friend Emojis that appear on Snapchat.

This is shown next to the people who are your best friends. These users are determined based on the number of snaps you exchange with each other.

If you see this with any of your friends then it means that you and that person share a best friend. In simple terms, if you have a mutual best friend with someone then this emoticon will appear next to their name.

It is same as the yellow heart with the only difference that you need to be each others number 1 best friend for 3 consecutive weeks.

Again, it is almost the same as Yellow or Red Heart emoji. But for pink hearts, you need to be each others number 1 best friend for 2 consecutive months.

It is the best part of Snapchat which I personally like. The fire emoji means that you and the other person has sent each other snap daily for the number of days that appear before the fire emoji.

It is also known as Snapstreak. If you and the other person don’t exchange snaps in 24 hours then the Snapstreak will expire and so does the Fire emoji.

If you are one of their best friends but they are not one of yours then this emoticon will appear next to their name.

This appears on a friend’s name when their snap has been replayed by someone. It simply means that they have photos & videos that are worth watching.

It indicates that your Snapstreak with that friend is about to end. Hence, you need to send a snap to keep it going.

It is quite an achievement if you get this emoji on one of your friends. It means that you and your friend have sent snaps to each other for 100 consecutive days.

If you see this emoji then it’s your friend’s birthday. Send them a snap to wish them. Please note that it will only appear for users who have enabled Birthday Party option in Settings.

The specific zodiac emoji will appear depending on the person’s date of birth. It will only show if they have added their date of birth in Snapchat and enabled Birthday Party setting.

Here’s a screenshot of my Snapchat chat screen. 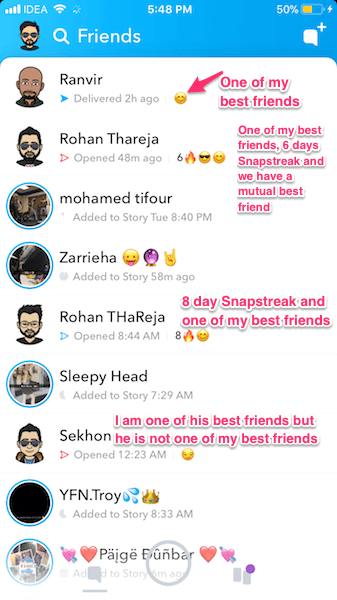 So, this sums up our list of Snapchat Friends Emojis with their explained meaning. We hope that this information will help you to understand how Snapchat works. These Emojis mean a lot after all. Ain’t they?