Wireless transmission of data has been crucial on smartphones since the beginning. I still remember using Infrared on early bar phones to share multimedia files. But in no time, Bluetooth made its mark for sharing data. And now NFC has arrived and is being used in various devices for the same. Both Bluetooth and NFC are the most common wireless connections available on smartphones nowadays.

These wireless connections help in sharing files and transmitting other data among devices. Though both are the same form of connection for short distances. But the usages are quite different. In this article, we are going to have a comparison between both of them and see what each have to offer and how they differ. So let’s start. 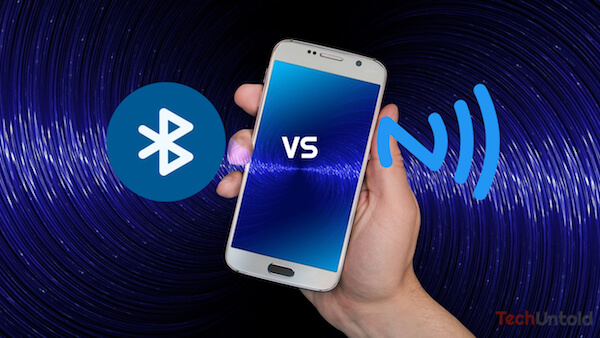 Below are the factors on the basis of which we are going to compare both the wireless connections. You can consider them to check what they have to provide. And then decide whether you prefer the services of NFC or want to pick Bluetooth.

If Bluetooth in any device is turned on that means it will function and consume battery for all that time. While NFC only works when used to transfer data. NFC uses short radio waves which ranges at 13.56 MHz that does not consume much power and drains less battery. On the other hand, Bluetooth goes at 2.04GHz and hence has more power consumption than NFC.

Using Bluetooth seems to be easy as people are aware of it since smartphones were introduced. Just search for the recipient and send the file. But if you compare the sharing technique of NFC where all you have to do is bring the device in contact with each other. It seems to be much easier than Bluetooth but can be complicated at first.

The usage of both Bluetooth and NFC are almost the same i.e. to transmit data. But in Bluetooth, you first need to pair with the device with whom you are going to share the data. While in NFC there is no need to pair the devices, just transmit the data and the device will find it using the NFC.

And one more thing to add here, NFC takes less time to connect with other devices i.e. around a few seconds and not more if done correctly. While the paring and connecting in Bluetooth can take more than 5-10 seconds.

Bluetooth uses high power signals to transmit the files so the speed is comparatively high than NFC. But if you are sending small files or bits of data then NFC does a pretty good job. Bluetooth has a maximum data rate transfer of 1-4 Mbit/s while NFC has the transfer rate of 424kbit/s. You yourself can see the speed difference.

Bluetooth seems to have less security than NFC. As in NFC, a person has to be in close contact with the device, it becomes difficult to access it while Bluetooth has a wider range which makes it visible to other devices. Hackers can easily bypass the Bluetooth connection but NFC seems to be much secured. No doubt it is used as payment methods on the devices by manufacturers like Samsung and Apple.

Though there are no limits to the file you wish to send using both the connections. But due to the speed of transmission Bluetooth is still ideal for transferring different files like music, photos, videos, etc. While NFC is more suitable for sending contacts, images and other small bits of data.

Now apart from the transmission, there are other additional features in both of them. For e.g. Bluetooth is also used to connect with multimedia devices like headphones and speakers which certainly is not the case in NFC.

But NFC can be used to create Rfid or NFC tags. These tags can be used for activating programs on the device, opening certain webpages, and even making payments. All you have to do is add the NFC command or information to the tags.

As we get to know by the given items, there is no such winner. Both services have their own advantages and disadvantages. For e.g., if you are looking to share large file then Bluetooth will be the answer, but if the file is comparatively small or contains any important information then NFC should be preferred.

Though NFC is a revolutionary technology but it still has miles to go in order to be perfect for proper transmission. Maybe, it is good to be used in public or crowded places. But till then Bluetooth will remain the perfect source to send data through wireless transmission and connect to other items.

So this was the quick comparison between Bluetooth and NFC. You can choose from any of the two to share files from smartphones but it will depend on what type of file and size you are sending. So what are your thoughts about them? Do let us know which one you prefer in the comments.