Near Field Communication or commonly knows as NFC is a feature provided on smartphones. Many of you might wonder what NFC is? Well, with NFC, smartphones are capable of sending data to other NFC enabled devices by bringing them in contact with each other. With this feature, users can send various types of data like images, music, apps and many other files from one device to another.

Not only this, but NFC is also capable of making payments. Also, it allows programming commands to various NFC tags and read them. NFC also uses Android beam for connecting and sending files to other devices whether phone or tablets. But how does NFC work? Here we are going to show you the methods to use NFC on Android devices to transfer files and other data.

Use NFC To Transfer Files

Well, nowadays most of the smartphones come with NFC chips pre-installed. Here we have used Samsung Galaxy S8 to show you the steps of using the NFC on Android devices. In some of the devices like Sony, you will see the official NFC’s logo on the back of the device, but for other Android devices, you can check in the settings of your device to see whether it has the NFC option or not. So, let’s see how to set up and use NFC.

Go to the Settings of your Android devices and in there select Connections. Inside connections, you will see NFC and payments options tap on it or just switch the toggle button on to activate the NFC. This will activate the NFC and Android beam on the device. 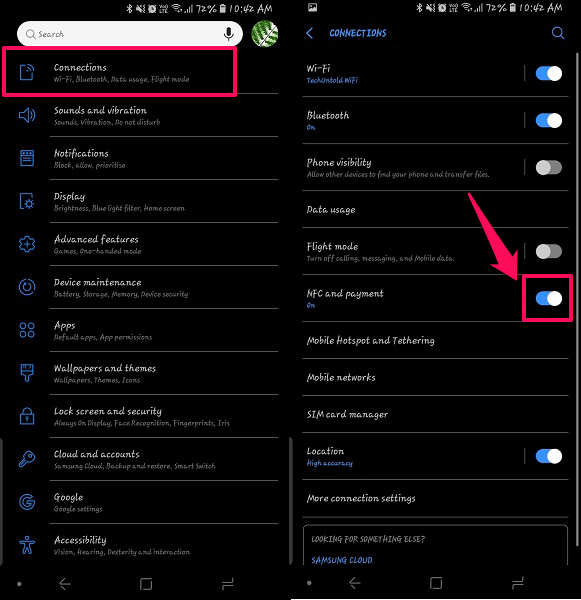 You can also activate NFC from the notification panel. Draw the notification panel down there you will see the NFC option, you may have to swipe left to get more buttons. After locating it, tap on the NFC logo and it will light up enabling NFC. This option may or may not be available on every device.

After you have activated NFC on your device, do the same on the target device to which you will send the data. After this, on your device open the file, image, webpage, audio etc. that you want to share.

Now once the file that you want to send is open, bring both the device closer and touch the back of the devices with each other. Once your device detects the other device, it will notify you with a sound and vibration.

The device screen from which you are sending the file will show the text saying Touch to beam. Tap the screen and the and both the device will show the notification of file being transferred. It’s that simple.

Note: Do not remove or separate the device unless the beaming has started. Once the transfer is complete you will be able to access the sent file on the target device.

NFC is widely used nowadays to decrease the time and process used in small bits of data or information transfer. There are wide ranges of NFC programmable Tags into which you can add commands. Once the device or any other NFC capable electronics comes in contact with NFC tag, it will run the command or any programme you have embedded in it. For example, activating silent mode, or other key features like sending messages etc. You can use NFC programmable apps to do so.

Now coming to data transfer on Android smartphones via NFC and Android Beam, you can use it to send files like images, videos, music by following the given steps above. Not only this, but you can also share YouTube videos, web pages and Apps from Play Store. Just open the desired YouTube video, webpage on the browser or app in the Play Store and bring the device close to each other.

It will open the video on the YouTube app or any browser available on the target device. And for the Play Store apps and web pages, it will open in the receivers Play Store and Web browsers respectively. At last payments, you can also use NFC to make payments to certain card swiping machines. Just tap your device to the machine at it will read the NFC program for your account or the card with which you are making payments from. Now you can make payments without carrying credit or debit cards just using NFC. Cool, isn’t it?

Also Read: How To Change DNS Settings On Android

With NFC you can save a lot of time by sending files or making payments on the go. Remember for sending files on tablets or phones both, the sender and receiver should have NFC and both the device should touch each other from the back, then only it will work. Hope you now know what NFC is and how it works. What do you think about NFC? Do let us know in the comments below.