Despite its popularity as an Android emulator, it still lacks in certain areas and faces many issues. For instance, it gets awfully slow while using heavy software and takes so much space from your internal memory. There were some occasions when it crashed in the middle of a game for me. Plus, it is not a developer-friendly emulator and just lets you have an Android experience on a computer. This could be due to its lack of keeping up with Android updates. Here are some BlueStacks alternatives, which will provide you with improved functionalities and additional features to your Android experience on PC. 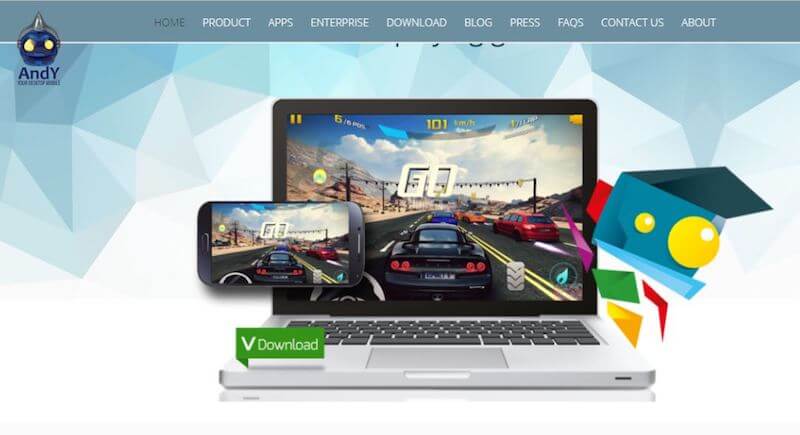 This Android Emulator has been there for a long time now and is best used for playing heavy games. Once you open Andy, you will have a full Android tablet on your PC. You can use it in portrait mode if you want. It supports running multiple apps at once so you can switch them back and forth easily.

The thing I found interesting with this software is that you can connect your phone to your PC and use it as a joystick for playing games. The advantage it has over the BlueStacks is that the heavy games and software run swiftly on it. Plus, it also gives you developer-options to those who develop Android apps. Supports both AMD and Intel chipset and can run on Windows as well as Mac.

NOTE:  The latest version of Andy is based on Android Nougat, so some new applications will not run on it or you might face some bugs with the interface. 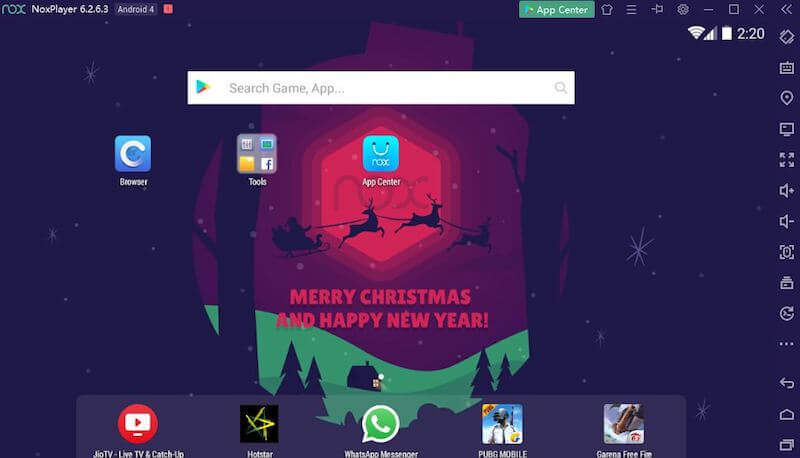 It is another good software like BlueStacks with more options to modify the interface according to your own needs. This Android emulator is based on Android 5.1.1(lollipop), which is not the newest but has the simplest UI. You have the option in settings to either use it in tablet or mobile mode.

If you are a game-lover then this is the best emulator for you because it comes with several gameplay optimizations like performance settings, graphics rendering mode, and frame settings. Not only that, it supports the keyboard and controller for a better gaming experience. It provides you root access to Nox player with just a click and you can install any APK’s by just drag and drop.  Changing the theme of your device and your location is another interesting feature that it has. 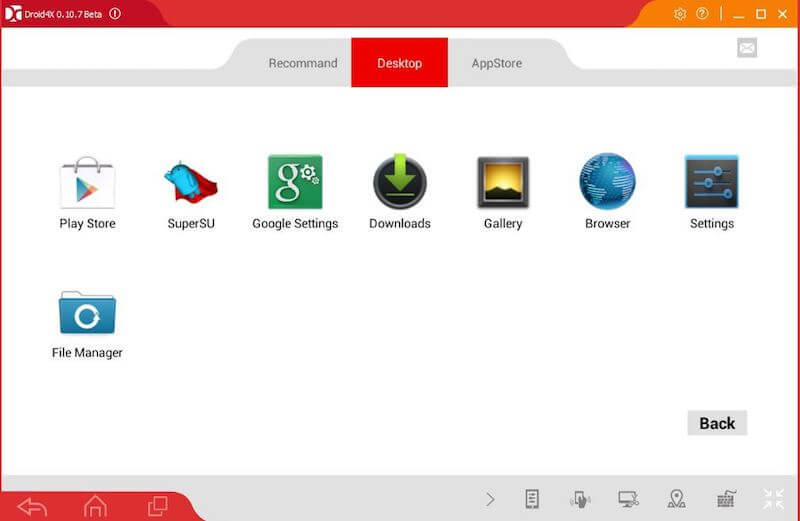 If you want the whole Android experience but are keen on saving space on your PC, then you should go for this one. This was the smallest in size out of all the emulators I tried. The user interface is straightforward and supports touchscreen input if you have a touchscreen PC. With Droid4X multi-manager you can use multiple Android accounts at once on a different window side by side. Being comparatively smaller in size, it does not offer much functionality but applications run smoothly on it. You can record your gameplay or take screenshots of your emulator screen as well. 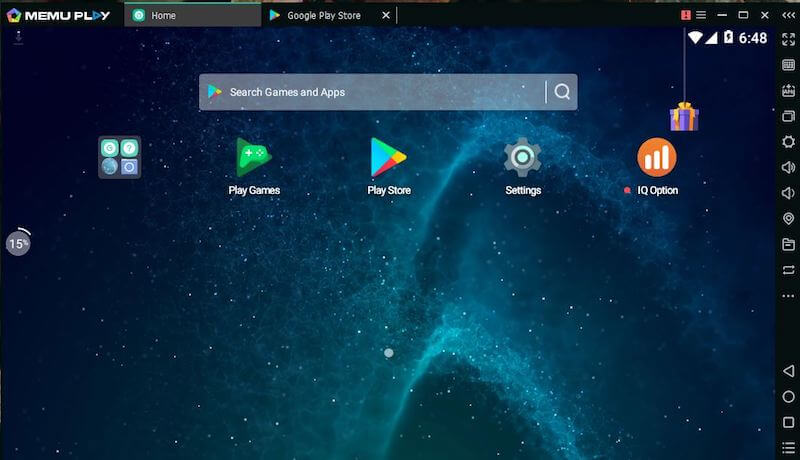 This is another lightweight software which is a developer-oriented Android emulator as it has more dedicated developers features. Supports Android 4.2 (JellyBean), 4.4(KitKat)  and 5.0(Lollipop) for helping developers test out their apps in each platform. It also supports multiple instances to run multiple accounts and apps simultaneously.

It has a very user-friendly UI and pretty much does everything an Android emulator would do. The good thing is that it is one of the few software that is compatible to work with both Intel and AMD chipsets. You can map your keyboard and mouse easily for gameplay. For each app, a tab opens at the top of the screen for easy access and switching. The only disadvantage that I noticed is that a Mac version of this software is not available yet as it is relatively new software. 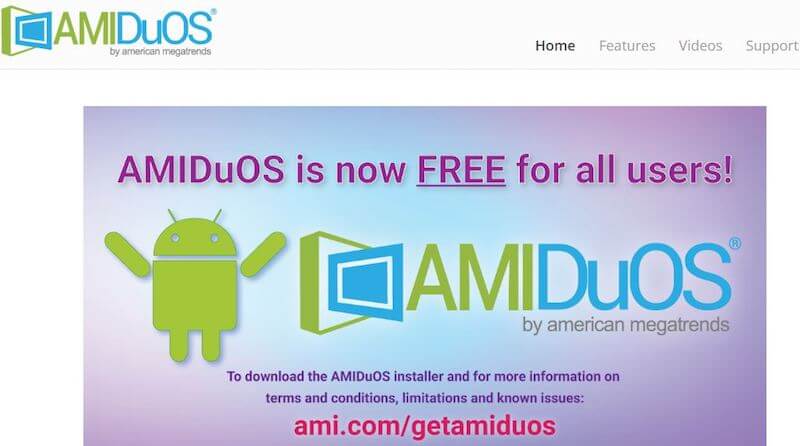 On its website, AMIDuOS claims to be the fastest emulator for Android. I couldn’t determine if it was the fastest or not but it doesn’t use many resources on your PC to run. Downloading it was a hassle because you can not directly download it from the website. You have to agree to its terms and provide your email ID to get a download link emailed to you. It is another developer-oriented software that has a jellybean and a lollipop version for developers to test out their apps and look for bugs.

It doesn’t have many features that will help you to improve your gaming experience. But despite that, I was able to play games on it without any lag. There is a paid version of this software and you can download it if you want new features and Android updates. It also supports multi-touch gestures, and sensors like Ambient Light, Compass, and Gyrometer.

KoPlayer is another promising substitute for Bluestacks when it comes to Android emulators. Unlike others, downloading and installing this software was an easy task. Being a new emulator, not many people are familiar with it. It supports Android 5.0 (Lollipop) and will run most of your useful apps. Android emulators are nowadays mostly used for gaming so it lets you map your keyboard, mouse, and controller for playing games. You can also disable/enable your keyboard keys to prevent you from accidentally pressing keys.

You can easily record your gaming footage with one touch and install the already downloaded APK files. There were some lags while playing games but considering this is a free emulator, I can’t really complain. KoPlayer supports both Intel and AMD processors but doesn’t have a Mac version. Nevertheless, you will be satisfied with its Android experience once you download it. 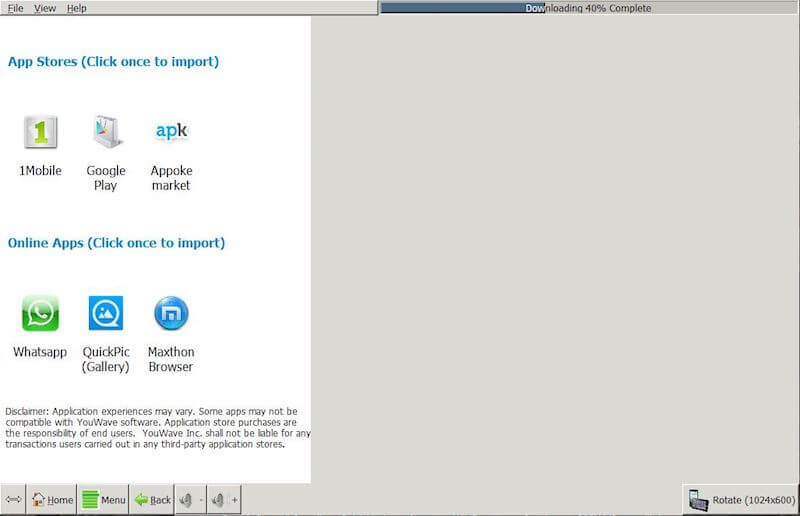 It has been a very popular Android Emulator among developers since it came out. YouWave is a light-weight and easy to use software that supports Android 4.0.1(Ice-cream sandwich). However, if you buy the paid version, you will get Android 5.1(Lollipop) which has more functionalities like screen-recording and touch input. This emulator is not ideal for gaming as it lags when heavy games are played on it but that’s good news for developers as it is primarily made for them.

You can just import your developed apps and it will run them directly or download apps from the Play Store. If you have a virtual box on your device then you have to uninstall it manually to run YouWave. For now, it is only available for Windows and in future updates, they will probably have a Mac version too. 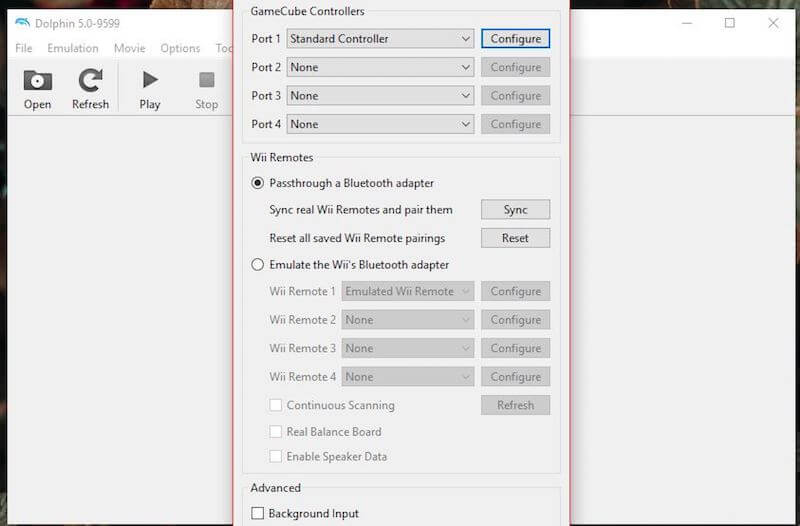 This Emulator is for someone who downloads BlueStacks for the sole purpose of playing games. It is an emulator for playing Gamecube and Wii games, which are two major Nintendo consoles. I’ll put it this way, Wii and Gamecube consoles are expensive and not everyone wants to spend that kind of money. So if you have a Windows PC or a MacBook, you can run almost every game that these consoles have to offer on your PC depending on your configuration. It will let you record your and your opponent’s gameplay so you can check if they were cheating or using a hack.

You need to download ISO or WAD game files and open them manually on this emulator to start playing. It lets you connect up to four Gamecube controllers and configure them accordingly. In the case of Wii, Wii remotes can be connected via Bluetooth. You have the option to lower the graphics if the game starts lagging at any point. If you need more assistance, then go to the guides and documentation section of its website.

Whether you are an Android developer, an avid gamer, or just a social media user who wants to have certain apps to be available from a computer, I assure you that one of these options will fulfill your every requirement. We would recommend you to read the minimum system requirements from their website before downloading. This will help you to run the software smoothly on your device and make your user experience better. So don’t wait to try them out and do let us know how you feel about these Bluestacks alternatives.