Twitter is obviously one of the most important social networks out there. No matter what happens, if you have something to say about it, Twitter is usually where people go first. Twitter is not all about complaining. People don’t just go to Twitter to complain about something but to socialize as well. 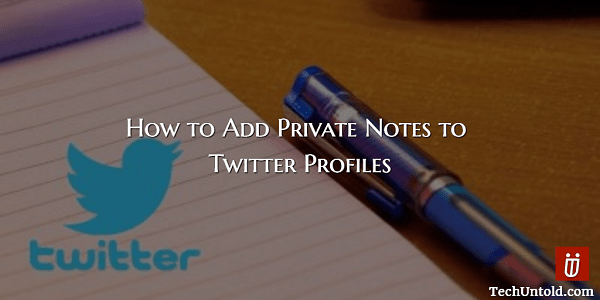 While some people are careful who they follow, others will follow just about anybody who follows them back. Until now, you only had Twitter’s lists to keep track of everyone you follow.

Don’t get me wrong; that’s a great tool. Using private lists you can hide Following on Twitter. But what if you need to know a certain something about that user. The list is of no use to you since it gives you so little information, but things change with Whodis.

The reason why you might want to add a note to a Twitter profile can vary. Maybe you want to know why you followed that account to start with or, that person has been twitting certain things about you (I don’t mean nice things).

The Chrome extension that’s going to help you keep track of everything is called Whodis. Thanks to this extension you can add all the notes you want to Twitter profiles and add whatever you want.

After clicking on the Install button, the extension will ask you to sign into your Google account. Once you’ve approved that that extension is all set up and ready to go. To add a note to any Twitter account, you don’t necessarily have to sign into the social network. That is definitely a good thing since it can be a real time saver.

Now, go to the Twitter profile you want to add a note to and below all the info on when they joined and the Tweet to button, you should see the Whodis option (It’s kind of hard to miss).  Type in Whatever message you want and you’re all set. 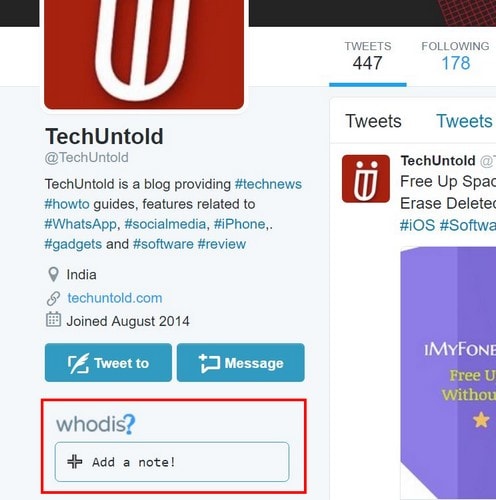 Don’t bother looking for a save button since there isn’t one. The text will be automatically saved. When I tested the Chrome extension out, I left after typing my messages to see if it was still there when I came back. Sure enough, it was still there without having to do anything.

Another way you can add a note to a Twitter account is by hovering your cursor over the name of the account on your Twitter feed. A pop-up window will automatically appear, and towards the bottom, you will also see the WhoDis option.

Just like before, add your note, and it will automatically be saved. This is obviously the faster method for an account you’re already following. 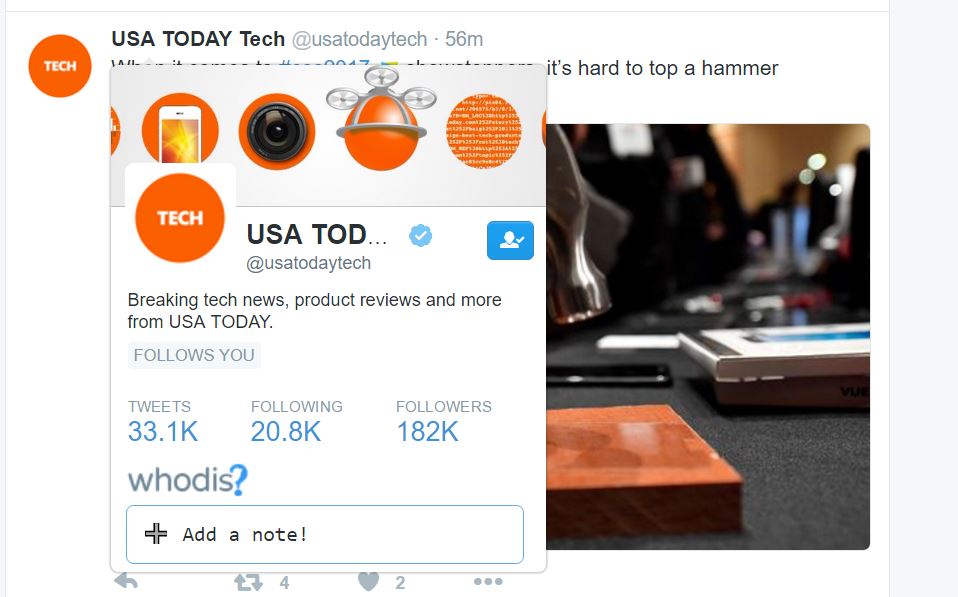 How to Identify Twitter Profiles with a WhoDis Note

Let’s say that a profile you added a note to appears on your timeline. To the right of the name, you will see a blue question mark. That’s the Chrome extension’s icon to let you know that you have written a note on that profile.

The downside is that you can’t see the note that you wrote, but it makes sense that it doesn’t. If you’ve written a lot, it can get pretty messy having the entire note appear. I think that the icon is more than enough.

If you ever need to see what you wrote, you can always click on the question mark to see what the note was about. If you liked how the Chrome extension worked, you can go ahead and repeat it for as many Twitter profiles you want.

As you can see, adding a note to any Twitter profile is not hard at all. All it took was the installation of one Chrome extension to make it all happen. This tool is a great way also to remind yourself why you may need to contact a certain account.

But, if you leave it to your memory, you could be left thinking it for a very long time. That’s if you even remember. So, do you think that you’ll give the app a try? Let me know in the comments. 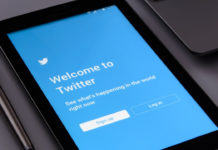