Other than listening to awesome tracks and creating playlists on Spotify, do you know what else you can do using this great app? Well, Spotify users can use Spotify music as their alarm tones. Yes, that’s true. Now you don’t need to wake up to the same boring tunes as usual. Using Spotify you can choose from thousands of songs available and start a new day by listening to a new song.

It is really easy to use Spotify songs or playlists as your alarm tone. All you need is a proper internet connection and an Android phone. The best part is that you don’t need to be a Spotify premium member to do so.

Also on TechUntold: How To Follow Friends Or Artists On Spotify

Setting Spotify Songs Or Playlists As Your Alarm Tone

It is really easy to set alarm on Google Clock using Spotify songs and playlists as alarm tones. To make these steps work make sure you have the Spotify app installed on your phone and it is properly working. Also, you need an Android phone with an Android version 5.0 or above.

3. After that, set a new alarm by tapping on the plus icon at the bottom.

4. Now if you are using this app for the first time, a pop-up will appear. It will suggest you set an alarm tone using the Spotify app. Tap on the pop-up. 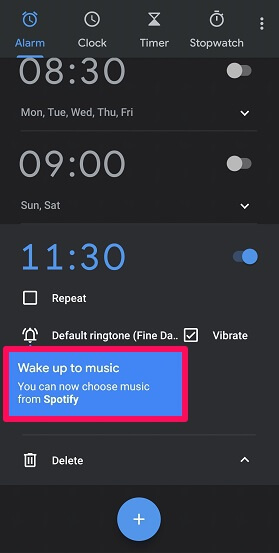 5. Choose Spotify Music after that. 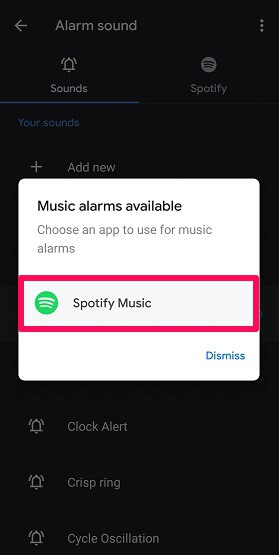 6. Now you can see various tracks, playlists, and artists under different categories like Recently played & selected, Rise and Shine, Lazy Mornings, Right Side of the Bed, Morning Workout and Podcasts for waking up.

7. Simply tap on the desired playlist to set it as an alarm.

To have a look at the songs in the playlist tap on the three-dot icon available in front of the playlist and select Open in Spotify.

8. You can also set the desired Spotify song as an alarm. To do that, tap on the search option available at the bottom and type the desired song or artist name. Other than songs, you will also find the artists, albums, and playlists related to your search. Now set them as your alarm tune by simply tapping on them.

Now the alarm has been set using your favorite Spotify song or playlist as your alarm tone.

2. Mornings – Use Your Personal Playlists As Alarm

Google Clocks isn’t the only option available with you. There are other apps that work the same way. One such app is Mornings. Using the Mornings app you can set alarms by syncing the app with Spotify and waking up to your favorite songs. Using this app you can also set your personal playlist that you made on Spotify as your alarm tone.

Steps to set your customized Spotify playlists as an alarm using the Mornings app are as follows.

1. Install and launch the Mornings app on your device.

2. Next set the alarm time and tap on Select Music option. 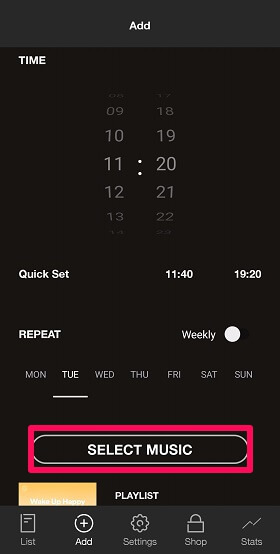 3. Now you can see that your Spotify playlists have appeared.

4. After that, simply tap on the playlist and tap on Save.

The alarm has been set now with your personal playlist as the alarm tone.

The next one on the list is Mornify app. It is the perfect app to wake you up. Other than allowing the user to select from various songs, it suggests the songs depending on different moods and genres. Users can also play their personalized album using this app.

Also on TechUntold: How To Change Playlist Cover On Spotify

Spotify always brings new features from time to time. The idea of connecting Spotify with alarm apps to use Spotify as an alarm is a great way to amaze its existing customers and attract new customers. But the users should keep one thing in mind, psychologically the tunes that we listen in alarms are the most hated once. So make sure that you don’t set your favorite songs as alarms tones often.