WhatsApp has many fun features including Status Update and more. One of them is an option to Star or bookmark messages for quick and convenient later viewing or reference.

This feature can be used in WhatsApp for Android, iOS, and even from WhatsApp Web or its desktop application.

It will allow you to mark a message which you can view in the Starred section without having to search for that particular message inside the chat which can surely take a lot of time.

Especially, when you can’t remember the exact date of the conversation or message that you are searching for. This article will throw light on WhatsApp’s Starred messages feature and tell you how to star messages and other tips related to it.

So without further ado let’s begin.

What Does Starred Message Mean And How Can It Be Helpful?

If a message has a star, then that means it has been saved or bookmarked.

The feature allows you to save or bookmark specific messages, photos, or videos inside an individual or group chat.

For instance, you got a message in the group that carries important information which you have to remember. Then you can simply mark that message with a Star.

This way you can access that starred content easily from the dedicated section without having to browse through the whole conversation.

How To Star Messages In WhatsApp

Starring messages in WhatApps can be done on both Android, iPhone, and Whatsapp for PC.

The method and steps are also the same to mark them but with just a little bit of difference because of the UI. You can see both of them with the screenshots below. The steps for PC for the same as for Android.

2. Long Tap on the message which you want to make as starred. Now, this is where the difference between the Android and iPhone apps comes.

3. On Android, long tap on the message, and you will find a *(Star) icon at the top of the chat where the options for deleting and forwarding the message are.

While on iPhone, after the long tap a pop-up menu will appear, and there the first option will be Star as shown in the screenshot below.

5. Now the message will be shown with a *(Star) symbol on the message or any other content. This means the message has been marked as favorite/starred as shown in the image below.

Recommended: How To Forward Image With Caption On WhatsApp

How And Where To View Starred Messages

After the message is marked with a star, it can then be accessed from a dedicated Starred Messages section. Now you can either view these messages according to the contacts or all together at once. You can do the same for the Web or desktop application for WhatsApp accordingly.

The messages you starred will appear under a separate section Starred Messages for each contact. You can find them on the Contact info screen. For that:

Note: This section will only be available if there is any starred message in the conversation of the contact you are opening the info for.

View All Starred Message At Once

You can see all the messages that you marked as bookmarked in different conversations in one place. It even allows you to search for any particular keyword from the search bar if you wish to.

Again it is a little bit different in both Android and iPhone. To open the bookmarked or starred messages altogether at once, follow the steps below. 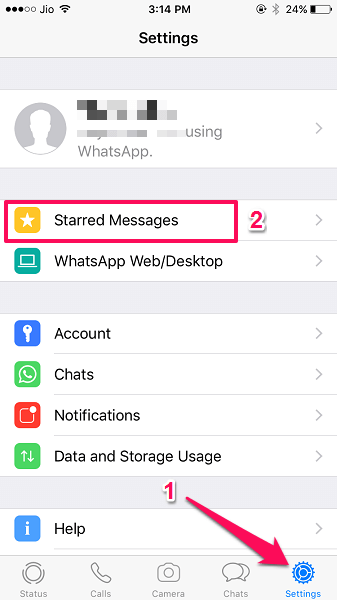 Recommended: WhatsApp Tricks, Features, Tips And Hacks You Should Know

You can anytime remove the star from the starred message if desired by long pressing on the messages and selecting * (Unstar) option by using the same method. The message will no longer remain starred.

Can Someone See If You Starred A Message?

No, there is no such option or way that any of the contacts or group members will get informed when you star a message in the conversation. Only you will be able to mark and see them. The same goes for you as well, i.e. you won’t be notified if any other contacts do the same for your messages.

While there is no dedicated way to save or create the backup for just the Starred messages.

But you can still do that with the help of Chat backup. To create a chat backup go to Settings>Chats and then select Chat backup.

As you will restore the Chat backup you created, it will also bring back all the starred messages in your conversations that you can see easily. if you wish to disable the backup, read our post about stopping a WhatsApp backup.

How To Recover Deleted Starred Messages On WhatsApp

If you don’t have a backup then also you can recover WhatsApp messages. For that, you can use Stellar Data Recovery. You can run software on both Windows and Mac.

Get it for Mac:

If you happen to have a PC, you can get Stella Data Recovery for Windows:

If you are using an iPhone, you can also take a look at other data recovery solutions that we collected for you here in this post.

So now you know key things about WhatsApp starred messages and how they can be helpful.

What are your thoughts about this feature? Share with us in the comments section below.