Best Video Editing Software for Windows and Mac for professionals as well as amatuer. All of the Movie Editing software’s mentioned have a free version with limited features of course and you can always swtich to paid version to get access to more brilliant features.

Everybody has said it and I’ll say it as well. Video is the future. Don’t worry; I’m not going to end it like that. Let’s talk a bit about why Video is going to rule the roost.

Video has been around since almost the beginning of the Internet, but it hasn’t had much of an impact until recently.

1. The number one reason for Video doing well exceptionally as a medium is the speed of the Internet. A video would take easily minutes to load and people had to wait before they could see it all. Now even the emerging markets have Internet speeds that touch 50 MBPS and that means videos can be watched real time.

2. Video is a faster medium to consume content. If you had to read a 1,000 word article and the same content you could see a video, the video would be any day faster.

3. The attention spans are limited. We are a multi-tab generation as well as a multi tasking, multi platform generation. There is too much content out there and this means people are constantly scrolling endlessly and there isn’t enough time for each content.

4. Creation of Videos isn’t exclusive. You can even make a short film only with your iPhone and many people will not know that it was taken with one. It’s easier to start talking and express yourself instead of sitting down, trying to translate your thoughts into words, correct errors and so on. Anybody can make a video. Not everybody can write well.

Facebook has in fact given preference to videos on its platform and is rewarding pages that originally post a video on their platform by distributing them more and giving second preference to external links. This shows how seriously they are taking Video.

Now that you’ve understood the power of video, let’s get to the core of this article.

Video editing is similar to plating in the culinary world, it’s to make beautiful the thing you’ve created. YouTube stars use their video editing skills to enhance their video, hence making it more funny, informative and contextual, depending on their requirement.

Let’s take a look at few of the video editing software that is available in the market.

Avavilable for both Windows and Mac, Filmora is an awesome video-editing tool. Even for an amateur it takes just a few minutes to completely understand how everything works. The free version has ample pre built themes, templates and actions that let you experiment with different set of content. This kind of templates and actions I feel are a must have because it let’s a person execute immediately and check the software out.

Video editing involves adding different layers and they may be text, video, animations etc. With Filmora, different components of the video have separate sections so you know what exactly you are deleting and what you are editing. The presentation and the way it’s displayed is useful.

There are shortcut keys for splitting the video, screen recording, importing a video and voice recording as well, keeping in mind the most user’ frequent tasks. 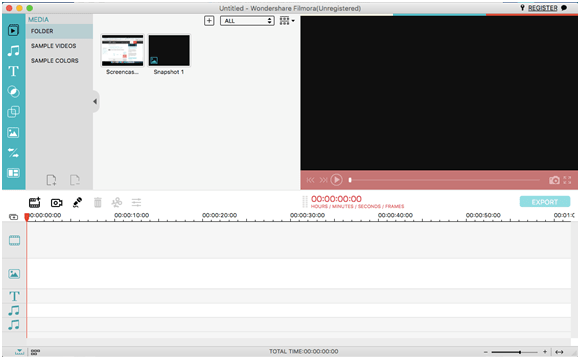 It has a simple interface with different editing options on the left tab. 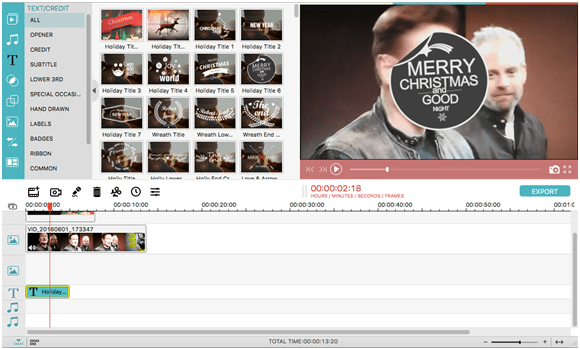 Pre-built graphics are plenty with Filmora. They had different set of themes for every requirement. As you can see an option called opener, that is a video opener that you could modify based on your requirements. These options are very important for early video makers. 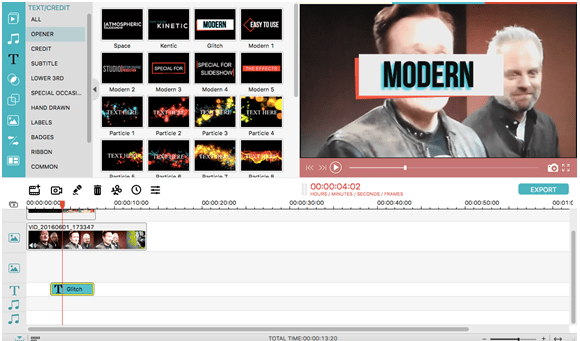 Here we have the split screen functionality which many video creators use to show multiple aspects of a video and it’s very easy to implement through Filmora. 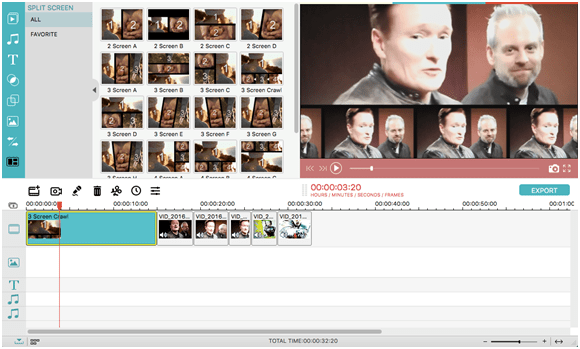 Magix  Movie Edit Pro is available for Windows only. It is a simple video editing tool which has the options you expect from it. One interesting option is the Chroma key which lets you merge two videos. It’s great for moving background videos for a foreground video. 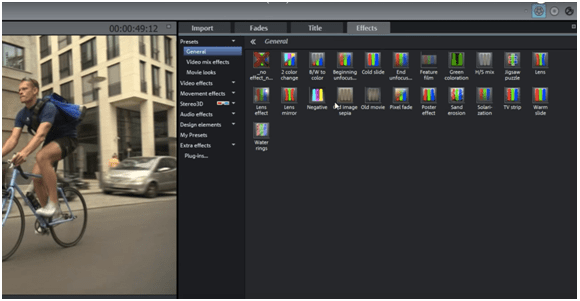 In the Video effects section, you can see a lot of effects, but you will not be able to make out what kind of effect it is unless you test it. This part is a bit annoying because the naming of these effects aren’t too clear. 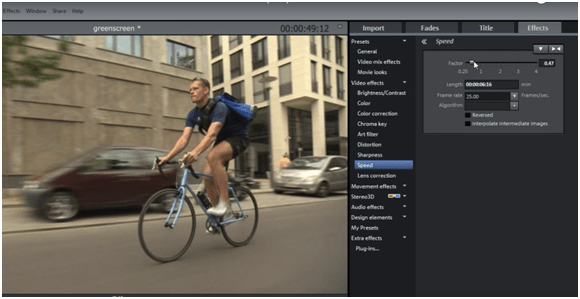 The Chroma Key Effect in Action. In the Image above the green section of the video can be replaced by another video, which will give the following effect.

There is the above option where, you can change the color of a single object in the video by selecting it. Here you can see the color of the bike is blue and in the image below it’s pink.

Cyberlink’s Power Director 14 for Windows is one of those tools that are well thought out and have simple actions for every complicated task. They have dedicated sections for every functionality a video editor would need. Let me explain through pictures. 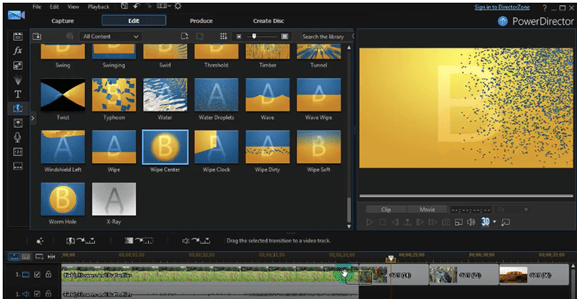 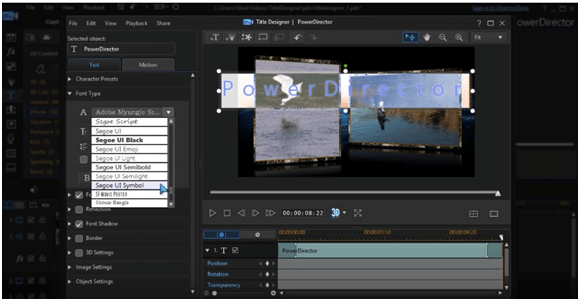 There are over 100 templates for the Title designer that can be easily dragged to the timeline and placed wherever you want it.  A dialog box where you can edit different settings of your title is available to make changes. You can change the fonts, the color, the shadow, the gradient, and also give it a 3D effect. This is as customizable it can get for a title creator. You can save your customized template under a new tag for future use. 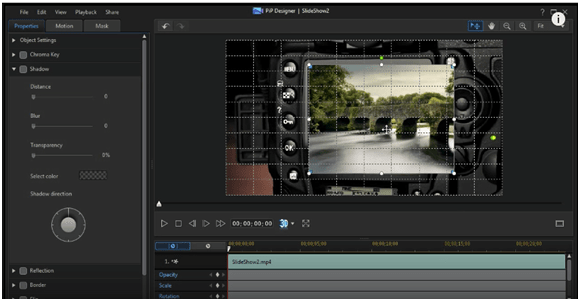 Cyberlink has advanced PiP designer that helps with creating brilliant overlays, animations, transitions and more. This is also good for multi layered videos, where you have a video background and another video on top of it(Ex: News Broadcast)

This PiP designer also helps in screen splitting and playing multiple videos at the same time. An image can be resized and layered accordingly to suit the video. Movements can also be created with still images that make it look more advanced than a slideshow. You can actually show a still image of a car move from left to right and add a motion blur effect to it. You can also enclose an entire video in a particular shape like a star or a circle. 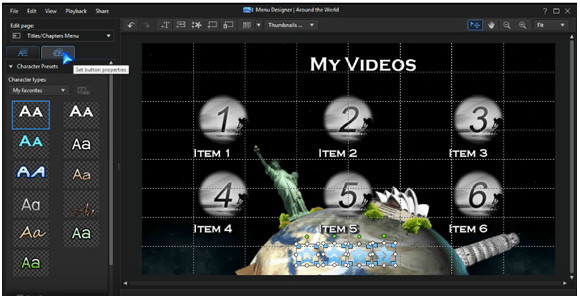 Have you seen a movie in your house with the DVD player? With that you have a menu which shows different parts of the movie, the access to the subtitles and more. You can create this effect with the Cyberlink. You can add title thumbnails, with moving video in each thumbnail to show a particular part of the movie for a better reference purpose. 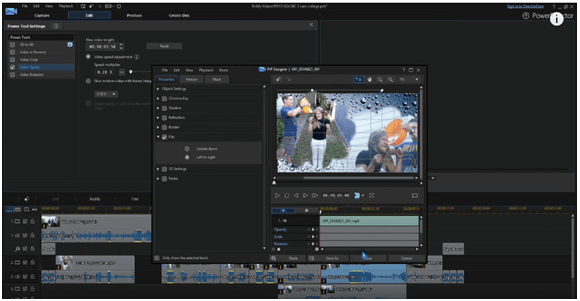 A multi cam collage with over 100 cameras can be created with this editor. This means you can add a bunch of videos and stitch them together and connect them through audio sync and also zoom in or zoom out a particular video. Audio sync is where different videos are shown, but a single audio track is played without changing the context. This is for advanced editors.

We Video is an online video editor that aims to do all the heavy lifting of video editing similar to it’s desktop competitors. Traditionally, Video Editors are desktop applications because of their sheer size and the amount of uploading, downloading and the work involved takes a lot of bandwidth and space.

Wevideo wanted to bring the benefits of video editing in an easy and accessible format. With a video editor that works out of a browser, it means, you can access your files literally from any computer with an Internet connection on it. They’ve made it even more accessible by creating Android and iOS apps that help you edit your video on the fly. So if you are on commute and you don’t have enough space to take your computer out, then you could use your phone to edit videos. That is impressive. 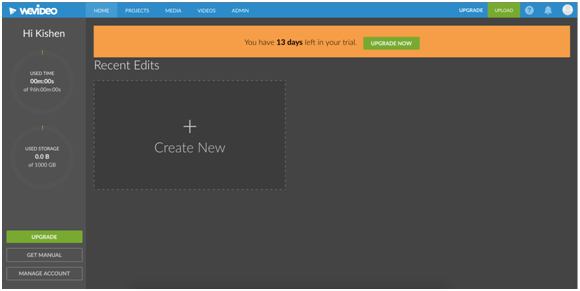 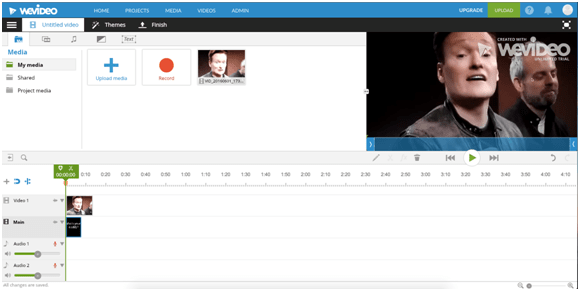 The first thing I noticed about Wevideo is the clean and simple interface even though it was in the advanced mode. 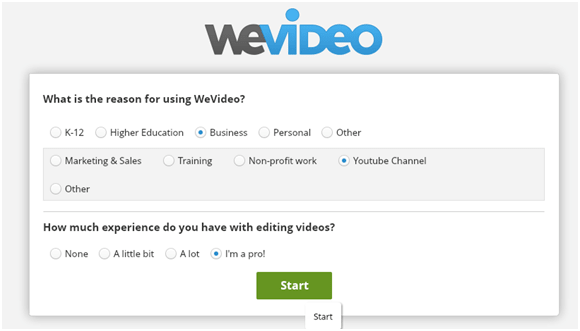 We video have an amazing option just before you start editing your videos, it asks you the reason you use Wevideo for and also how much experience you have. As you can see, there are options for Marketing, Training and Youtube Videos. This helps in customizing the software based on the requirement and the user isn’t inundated with options that aren’t important to them.

The experience aspect also decides the kind of tools that will be available for the user. This is an interesting option, but this is also useful for Wevideo because they don’t want their users using excess bandwidth or give every user a bloated web software which slows down the website. 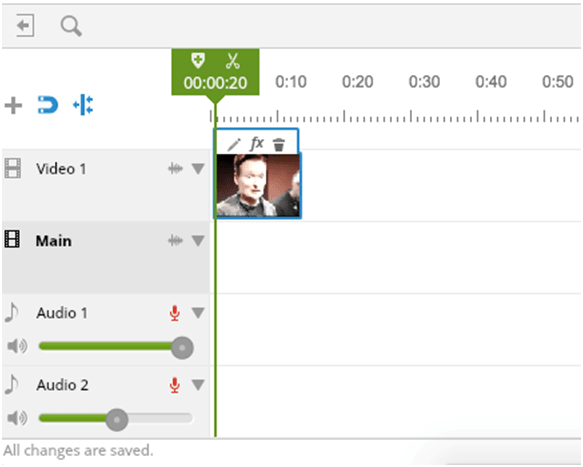 The Interface in the timeline is simple, with separate sections for Audio and Video. Although nice, this isn’t as good as Wondershare.

Wevideo boasts of having a lot of music on their video editor to help users. They do have an exhaustive list including sound effects like Cellphone sounds which help in easy addition to the video instead of recording it separately.

The effects and overlays are simple. Nothing out of the ordinary. Some overlays I thought were really not helpful except for making basic videos.

There is one thing I noticed about Wevideo which I didn’t in the other Editors is the speed. It does take a bit of time in uploading and performing some functions. This is obviously because of the fact that it’s web based. This can be a minor setback for Wevideo for those of you who like to do your editing work extremely fast.

AVS Video Editor is a Windows based editing software. 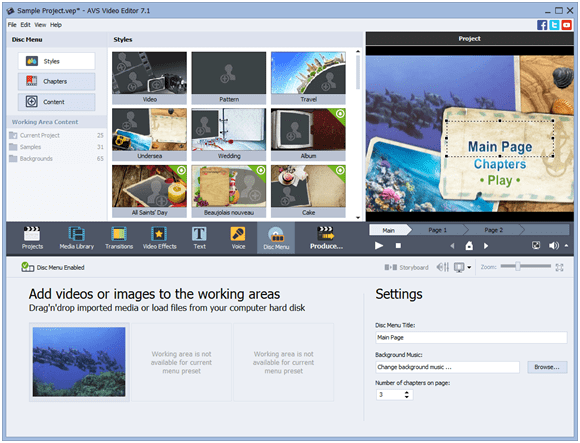 As you can see, it has a clean interface with really useful themes that they call styles. It’s easy to create chapters, by naming every screen and a helpful breadcrumb sort of option below the video helps by telling you which page you are on. 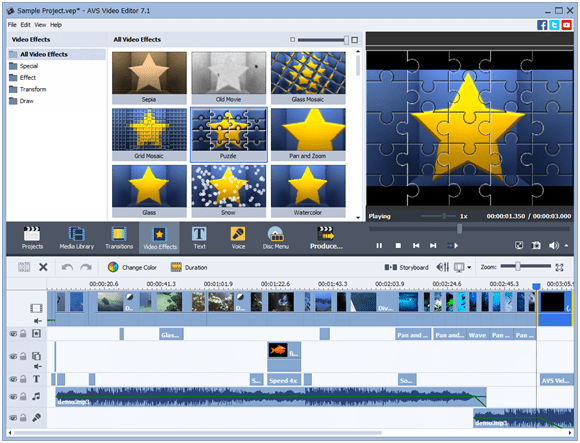 My favorite part about the AVS Video editor is the timeline; it’s one of those clear interfaces that have demarcations for every section and also easily accessible one click buttons for all the video editor’s needs. As you can see in the timeline, every medium has been treated in its own unique style. This means, the video has images of the video and the audio has audio waves. There are helpful text within the timeline that explain the options you’ve chosen. 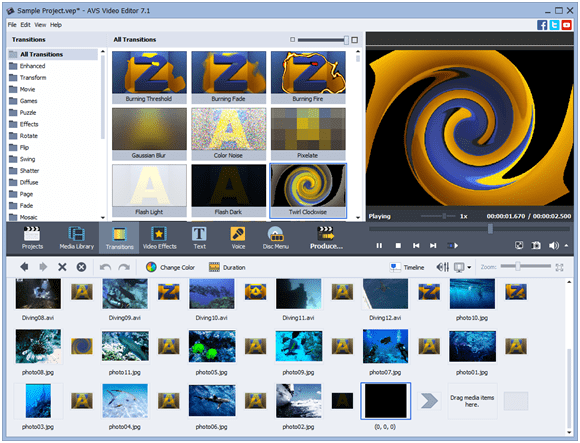 One of the best features about the AVS Video editor is the level of customizations that you can do to your video. There are transformations or various kinds, styles, options to rotate, shatter, swing and every one of these options have different styles within them which makes it a very exhaustive collection. This will make sure that your video’s transitions are original compared to many videos out there and will make your stand out. 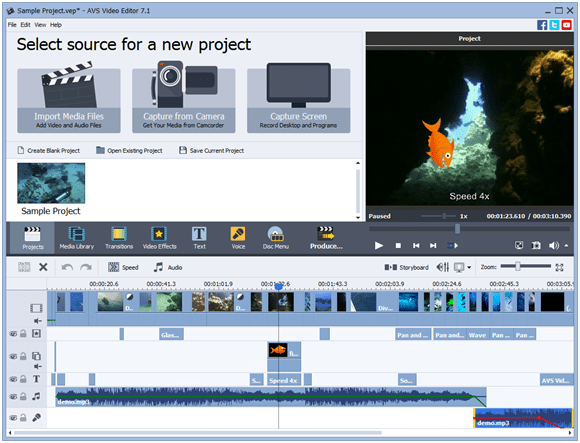 There are options to record your desktop to make simple screencasts or take footage from you camcorder. A video can also be sped multiple times and that’s a good option to have.

There you have a list of movie editing software to make your videos look great. If you’ve used any of the ones above or any Video Editing Software other than these, do let us know your experiences.