Smartphones have made our lives easier with so many functions and features. Allowing to control the TV is really one of the best features. Many times it happens that we do not find our remote or it suddenly stops working or the batteries die due to which we are unable to see or control the television set. To solve these problems you can use TV Remote apps and control the TV using your Android or iPhone just like a normal remote.

Before going to the list of best TV remote apps, let’s take a look at the two different categories of apps as the working of the apps in both the categories are different. One category of apps will work with the help of the IR (Infrared blaster). Sadly there are fewer phones with this hardware but you will still be able to have hands on these. Even Apple does not provide the IR in their smartphones. Devices like, Samsung S7, S8 and other manufacturers like Huawei, Xiaomi and few others have the IR on their phone.

Another category of apps work with the help of Wi-Fi networks. But for them to work, you will either need a Smart TV or Android TV which can be connected to wireless connections. These categories do not require the IR blaster and will work fine on any platforms whether Android or iOS. So without further ado, let’s have a look at the best TV remote apps for controlling your television set. 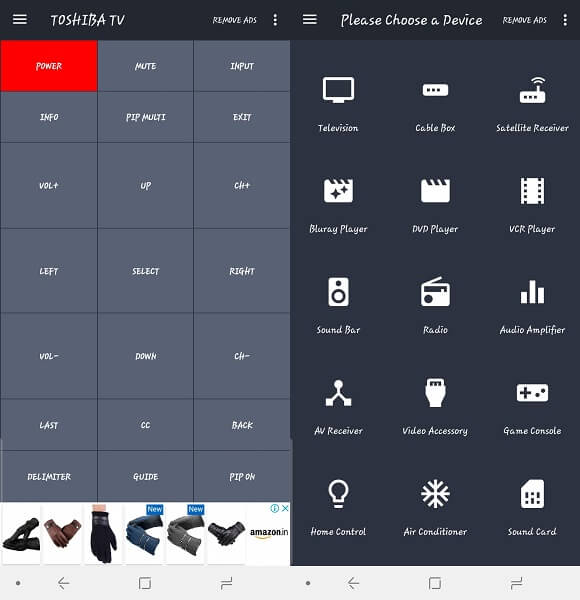 As the name of the app suggests, it is an IR based app with which you can convert your phone into a remote. Once you open the app, select TV and then the model or name of the television you are going to control using this app. There will be various sets of control options depending on your TV model. You can select from any of the given set as per your desire or the one which works. Once the setup is done, you are ready to use your device as a remote. This TV remote app will work without any Wi-Fi. 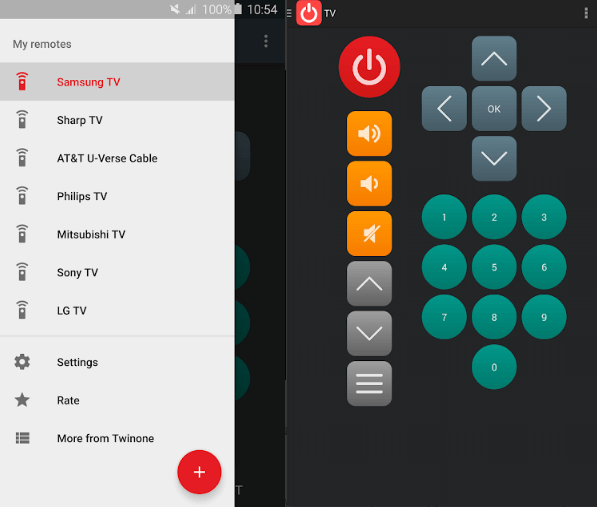 Another TV remote app for Android devices having IR hardware. Just like the above app, you will be able to control almost any TV, whether they are smart or non-smart. You will need to select your TV and the app will show you the remote buttons which you can use to change channels, input numbers or control the volume of your television set. 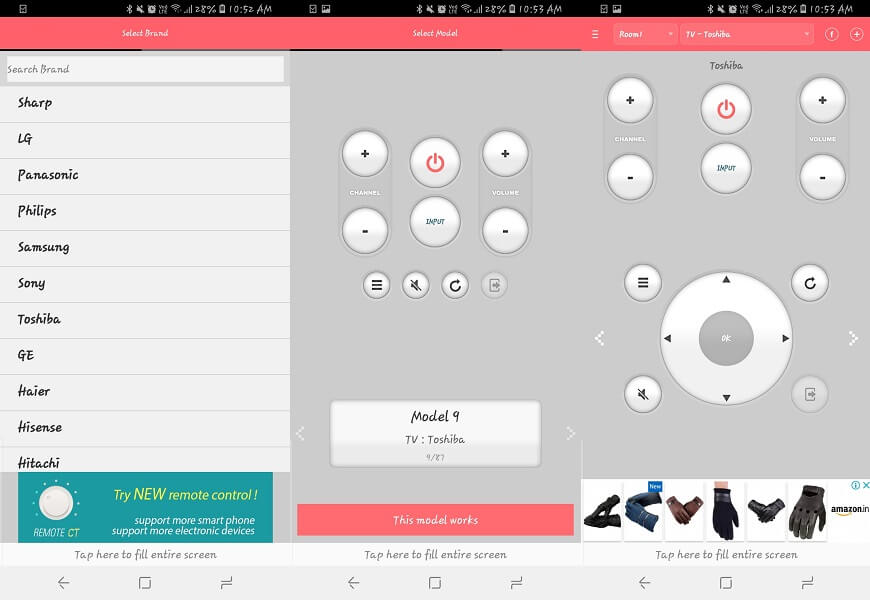 With ASmart Remote IR you can control your television set easily. The interface of this app differs from the above apps but the functionality and the methods are the same. You will need to select the TV brand and then try remotes from different models and set the one which works for your TV. It allows adding multiple remotes and using it as per requirements. This app will work only with the smartphones that have built-in IR hardware. 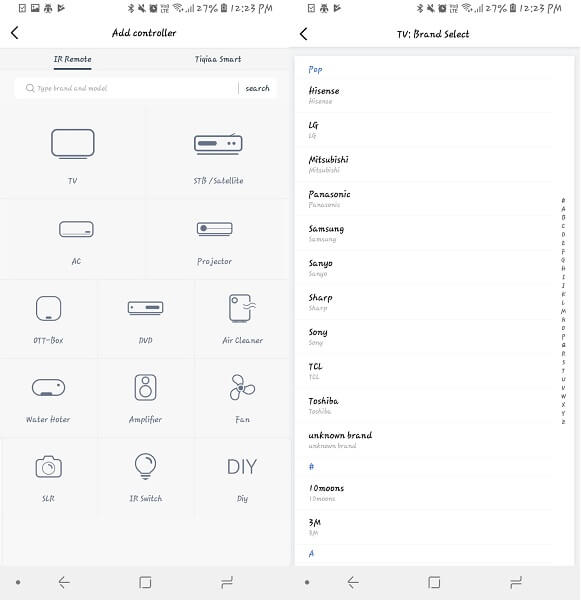 Yet another TV remote app that will let you control your television just from your smartphones using the devices having IR blaster hardware. The working of this remote is similar to all the above apps containing different sets of infrared codes for different functionality. The layout of this app is really nice and it looks better than the other apps. Apart from TV, you can also control other appliances like AC, DVD etc. that work with an IR receiver from this app itself. 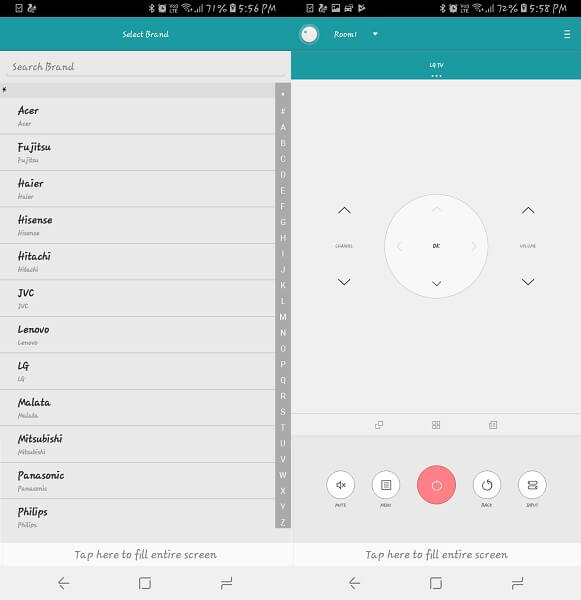 Remote CT is available only for Android devices as it works with the help of IR hardware in the device. There are remotes for various models, you can keep trying unless the button works, if not then select the next model instead and try again. Apart from TV, you can also control other devices like a set-top box, DVD players, Audio system, streaming boxes and other appliances with IR receiver technology. 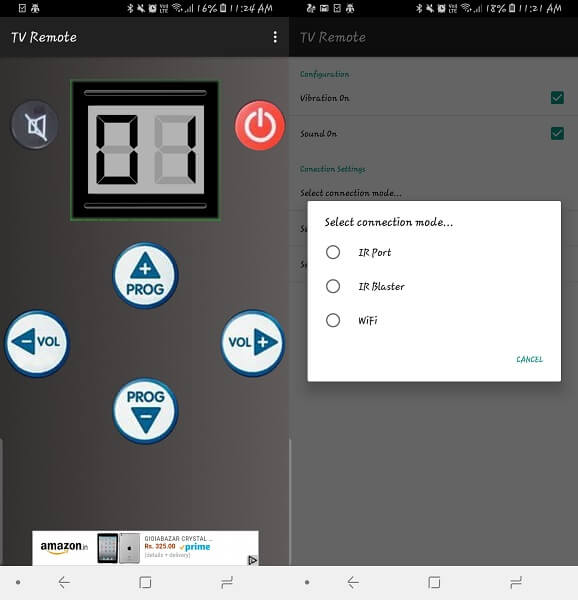 With this TV remote app, you can control TVs of Samsung, Toshiba, Sharp, and a few others. This app will let you select the method of controlling which may depend on your smart or non-smart TV. You can choose IR Port, IR Blaster or Wi-Fi to control the television. It will only have a few buttons for using and controlling. As it is universal it will be more than enough to control a few main functions of the television.

ALSO READ: How To Set Different Notification Sounds For Different Apps On Android 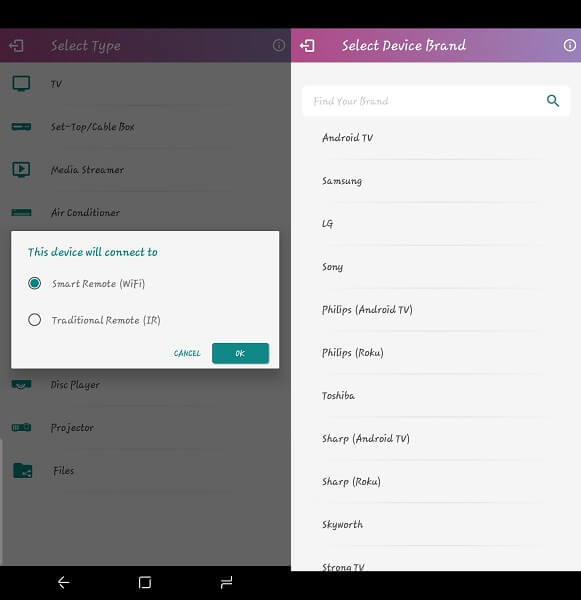 SURE is available for both Android and iOS devices. And the best part is that it can work with both the methods, i.e as traditional remote via IR hardware or smart remote just using the Wi-Fi network. For devices that do not have a built-in IR hardware, you will need a Broad link WI-FI TO IR Converter to use the traditional style. In addition to this, you can also browse system files or even use it as a media player to play different kinds of media files from this app. It can also be used to stream online media from various servers.

This application is similar to the above app i.e. SURE Universal Remote. It can be used either with the AnyMote Home (a device that converts Wi-Fi to IR signals). Or you can use it to control those appliances and devices that are connected to the same Wi-Fi networks. For example Smart TV, Smart lights or any other smart devices that can be connected with any wireless networks. 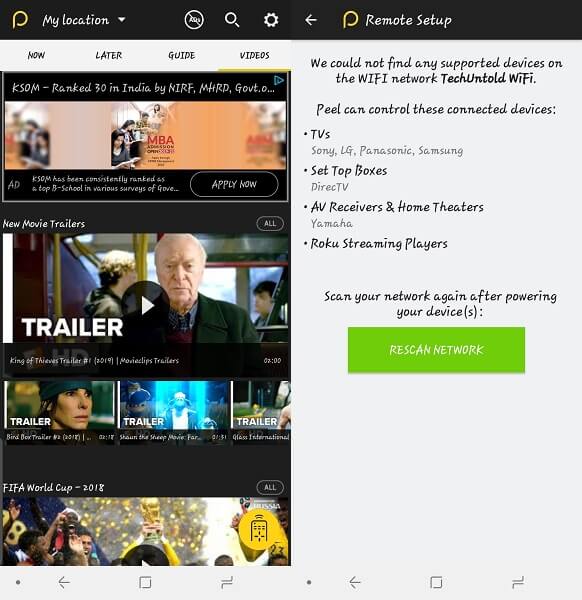 Peel is one of the best TV remote apps that you can use on Android. This app can control your TV or devices and appliances that are connected to the same Wi-Fi network. It can be used to control other items like AC, set-top box or other streaming devices like Chromecast or Roku. In addition to all this, it will also work as a TV guide showing you the information for various channels and its program timings. 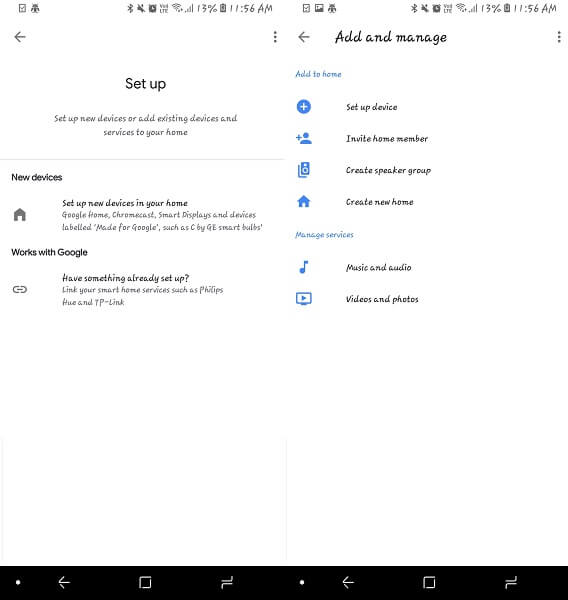 This one application from Google will let you control almost everything that is smart and connected to Wi-Fi. Though it does not have that much features like a proper TV remote control as in all the apps on this list, you can control your Chromecast using the Google Home app. This way you will have the control to switch between the streams and control the media on the Chromecast connected to your TV from your phone. It can also control other devices like smart displays, lights, and other smart devices.

These were some of the best TV remote apps that you can use to control the television from your smartphones. Some of the apps may or may not work on all the devices depending on the IR hardware. But if your device does not have an IR blaster then you can buy gadgets like AnyMote Home or Broad link. These devices will turn your Wi-Fi into IR signal and you will be able to control all the smart and non-smart TVs easily.