Sudoku is a very simple yet challenging number game. You have to use your intelligence and place number in the given grid. Earlier you would find games like crosswords and Sudoku in newspapers but with time the apps for such games became available for smartphones. There are no additions, multiplications of numbers here, so you don’t need any skills to play it. It will improve your logical ability and control over numbers. We present you the best Sudoku apps for Android that you can play anytime anywhere.

In Sudoku there are grids divided into different parts and boxes with some randomly placed numbers. The goal is to place the numbers 1-9 without repeating them. You have to see that the number should not come twice in a row both horizontal & verticle and in the respective column. Whether you are a mathematician or an ordinary person you can enjoy playing this game. 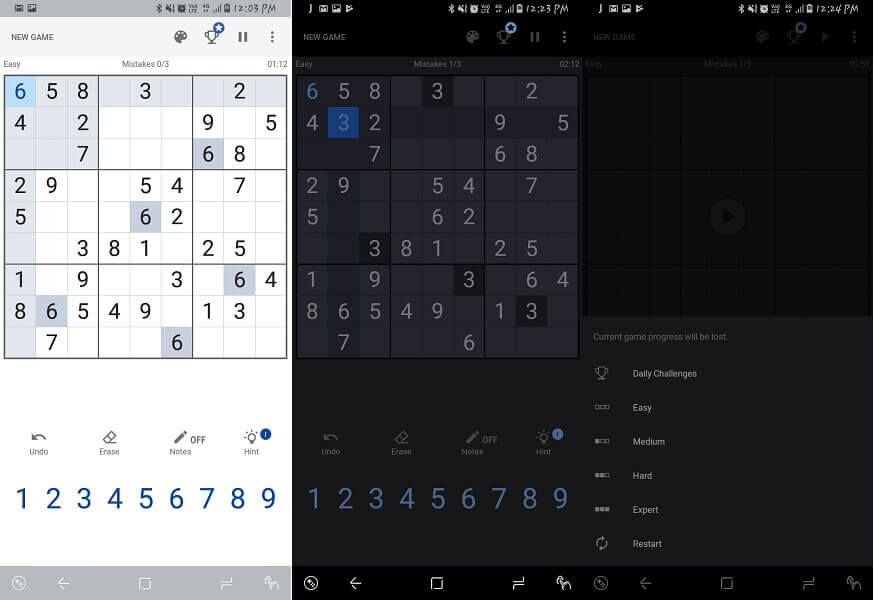 Use your logic to place the numbers in the grid with this Sudoku app. In this app, you will get to choose the difficulty according to your desire from Easy, Medium, Hard, and Expert. You have to analyze and place the numbers very carefully as you will only get 3 chance to make wrong predictions. There is an option for making a note in the box where you can select and note down the possible number that can be placed in a box.

You can also long press a single number and fill it in the boxes where you think they fit. It also has different themes which you can choose to play. The dark theme is perfect for playing at night time. You can also play Daily Challenges to improve your skill. 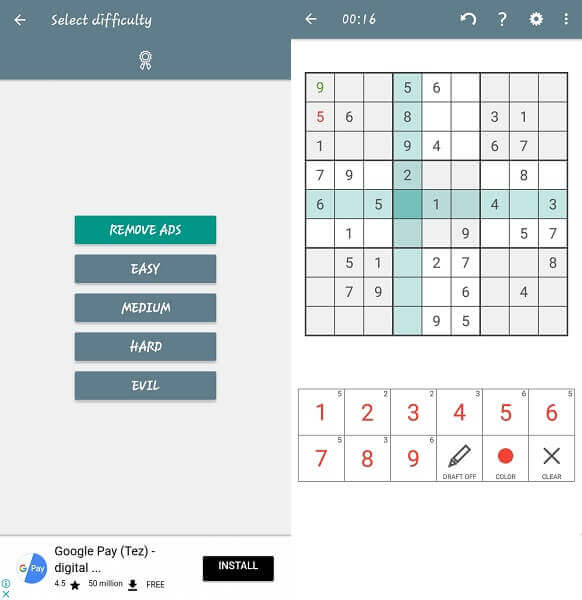 This game is similar to the above one with the same grid style and background. The difference it has is that you can play it without any move limitations. It has different levels, Easy, Medium, Hard and Evil. Each level has 20 Packs and each pack has 10 Puzzles. You can also keep a track on the time that you take to finish a puzzle.

Apart from this, you can select different colors for numbers you input in the columns. This game also has a Night mode for making it easy to play at night. It also has the option to take notes like the above app. 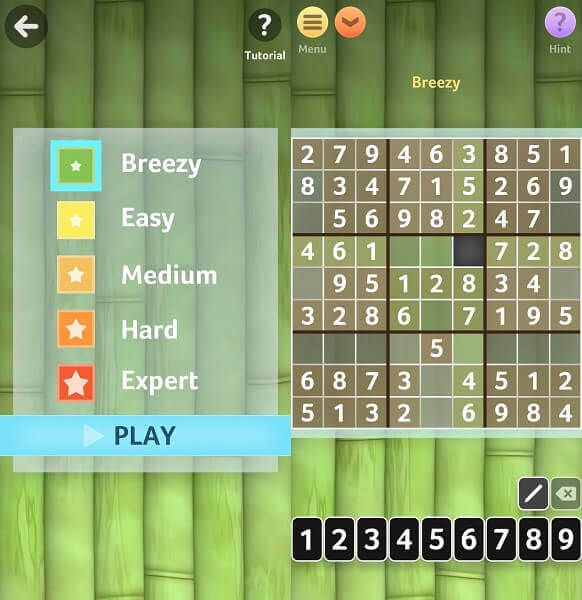 Another Sudoku game with different graphics and theme options. In this, you will get to choose the difficulty form Breezy, Easy, Medium, Hard and Expert. You can also select from the classic grid styles and different background themes in the game. It also shows you the status of your game and scores in the leaderboard.

Apart from this, the game does not have any limitations of moves and time. You can make the wrong moves without worrying. It also has hints which you can use if stuck on any hard level. Just like the above game, you can also make notes for the possible numbers you think can be in the box. 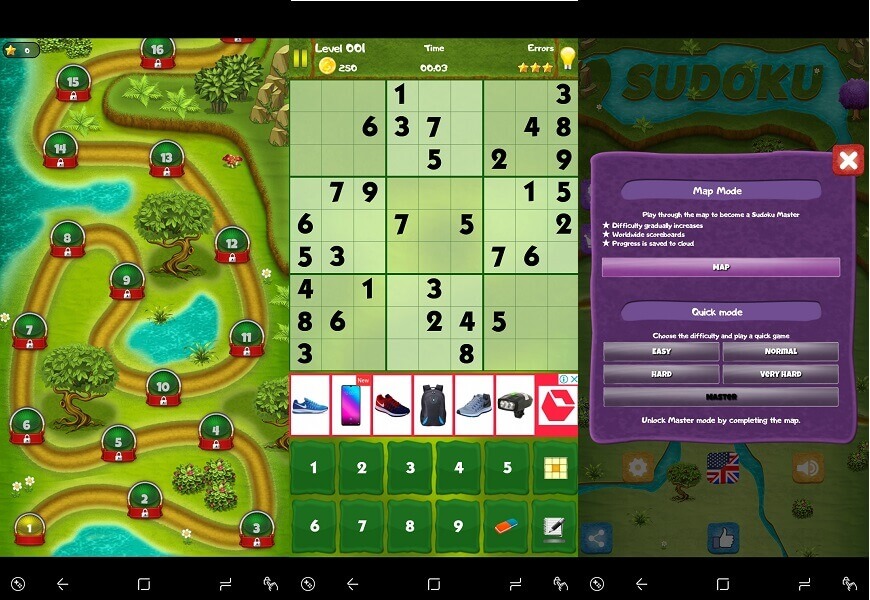 Train your brain and clear all the levels in the Map or play Quick mode to become a sudoku master. This game is similar to play as all the rest of the apps but with different graphics and animations. You will get 3 chances to make an error just like the Sudoku by the Easy brain. Apart from the various difficulty levels, it has a Master mode which can only be unlocked once you complete the map mode.

This game allows you to select your desired language. It has some common languages spoken around the world which will make it easy for you to understand it. One thing where it differs from the other apps is the validations methods. Here you can choose different options to check the number you have selected is correct or not. It can be instantly after you input the number in the box or after all the boxes are filled. 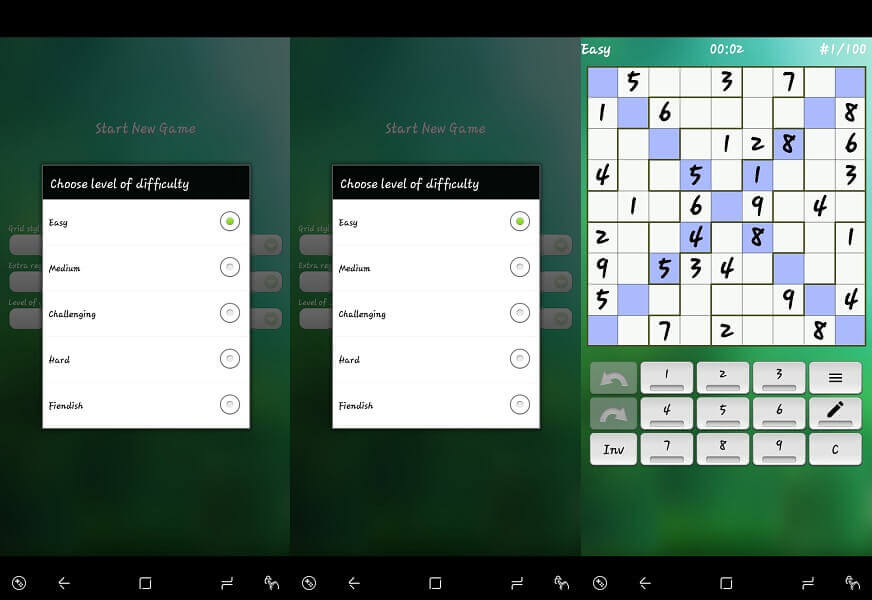 Now you can play Sudoku offline and in different styles with this app. Not just the standard box and columns, it has a Squiggly grid with different patterns to select from. You can also select to have extra regions on the game if you desire. It has different difficulty levels like Easy, Medium, Challenging, Hard and Fiendish to play from.

The rules are similar to every other Sudoku game. The only difference is the various puzzles and patterns in this app. You can play from 1000+ levels to master your logical reasoning. It also has a Dark theme like others.

Among the list of Sudoku Android apps, this one is the best with clean animation and minimalistic options. This game has various themes that you can select and change at any time, even while playing.

If you are new to this game you can start by playing the Beginner mode. Apart from this, you can go for Easy, Medium, Hard and Extreme difficulty levels. You can also use Assist features where there are options to help you while playing. For e.g. tap on any number an see how many times it is used in the game to make your choice of numbers to be written in the boxes.

This game is just like every other Sudoku apps for Android phone which you can play anywhere to pass your time with various difficulty levels to play from. You will get two different colors on-screen numbers pads on the game. The Blue one is for writing the possible numbers that you think can be written in the boxes.

Best Sudoku Apps For Android You Can Play

You can play these easy yet challenging game anytime anywhere you like. Though all the games are quite similar, you can still select different themes in some of the game you desire. All the games are free to download from the Play Store. But from the list, according to me Suduko The Clean and Sudoku offline are the best Sudoku games you can play.