There are various reasons as to why your Android device might overheat. You might have apps that take up a lot of your phone’s resources or it could be the Summer heat itself. Whatever the reason might be, what’s important is that you cool down your Android device as soon as possible. The following apps will help lower your device’s temperature, so it doesn’t cause you even bigger problems. All of the apps are free, so you have nothing to lose but a few minutes of your time. Your Android device will appreciate if you install one of the following best cooling apps that are available in 2018.

Most of the apps mentioned here have the same name so we highly recommend using the app links given below each app’s description. 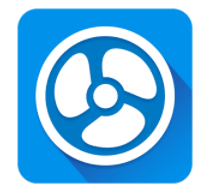 Cooling Master is a must in every Android device. It’s an easy to use app that gives you the temperature of your phone as soon as you open the app. At the bottom, you’ll see a button that can detect the apps that cause your device to overheat.

Tap on it, and after the scanning finishes, you’ll see a list of apps that are the culprits. If you don’t want the cooling app to close an app that’s on the list, simply uncheck it and then tap on Clean Up.

Cooling Master will then tell you to turn off your phone and leave it alone for a while. It sounds impossible, but it’s something you need to do so your phone can cool down. 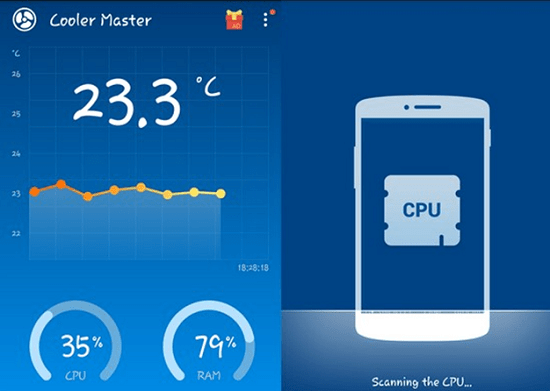 Cooler Master is just as easy to use as the first option. Cool down your Android device by tapping a single button. The app gives you RAM and CPU percentage as soon as you open the app. If the app tells you that the temperature is not Ok, tap on the blue button below and Cooler Master will go through your apps.

You also get the option to unselect an app if you think it’s necessary. Select the Let’s Cool Down button and all the apps on the list will be closed to help the temp go down. When you leave your phone alone for the cooldown time, make sure it’s not in direct sunlight since it’s going to prevent your phone from cooling down. 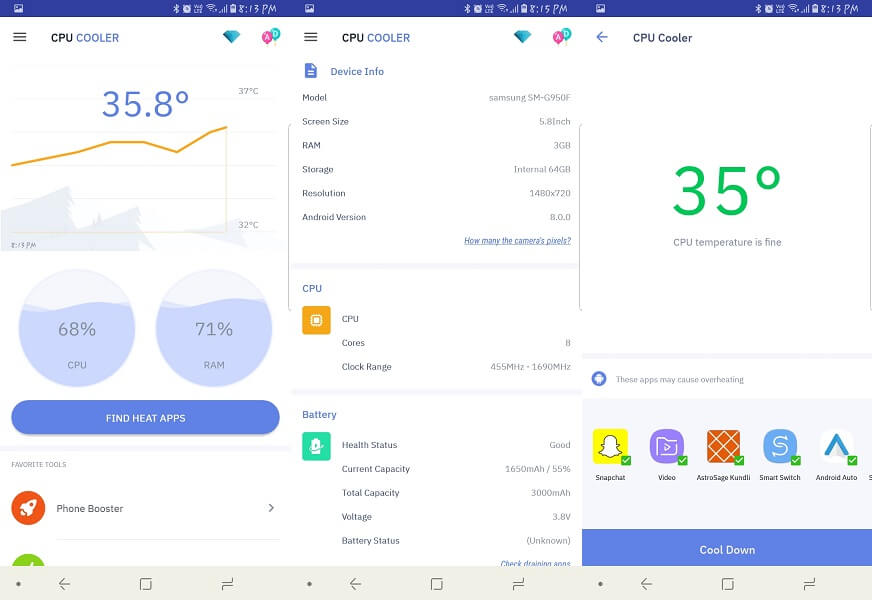 Discover real-time temperature, CPU and RAM usage status of your smartphone with this app. It will also show your Device info including some specifications of your phone, CPU and your battery. It will also help in reducing the temperature by detecting apps that are causing the phone to overheat.

Just tap on Find Heat Apps and it will scan your device to show you which app is causing much heat.  Tap Cool Down and it closes the apps and reduces your smartphone’s temperature. Apart from this, it also boosts the performance of your smartphone by cleaning its RAM. You can clear junk files to make some extra space and there’s also a Battery saver to make your phone run a little longer. It is also possible to set a widget on your home screen for one-tap cooling. 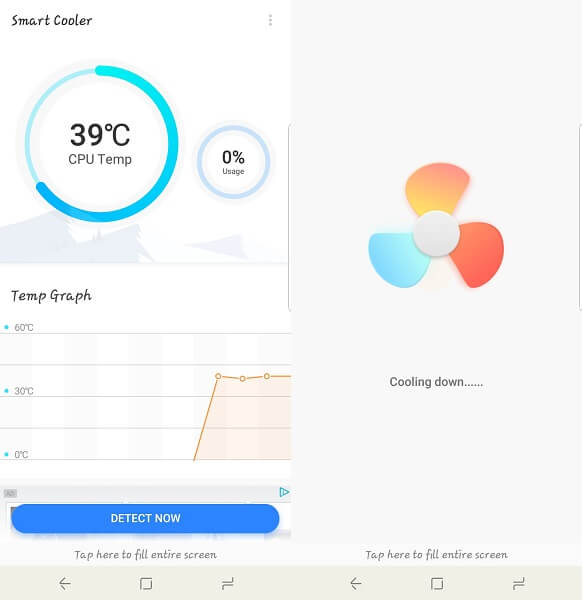 Another handy cooling app which will help in monitoring the temperature and usage of CPU on your phone. The app is very simple to use just open it and it will show the status of phone CPU and its usage with a graphical temperature report.

You can get the status to know which apps are causing the phone to heat. To do so select Detect now and it will scan the phone and installed apps. You can also cool down the temperature of the phone. Just tap on Cool Down and the app will optimize the smartphone and cool it. 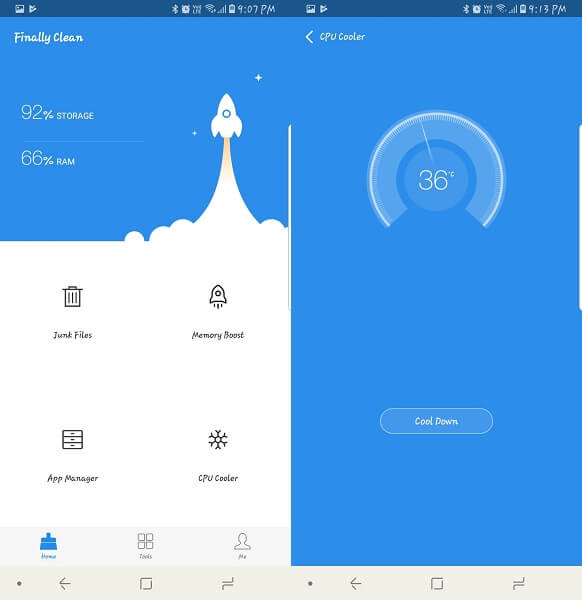 Finally Clean is really an app that can finally help with the cooling and storage related problems. The app has a simple interface showing the storage and RAM status of your device. On the dashboard, there is a CPU cooler, tap it and it will show you the phone temperature. Tap Cool down to reduce the temperature.

Besides this, it will also help you clear Junk files and Boost phone memory. App manager will help you in uninstalling the apps from your phone, you can select multiple apps at a time. 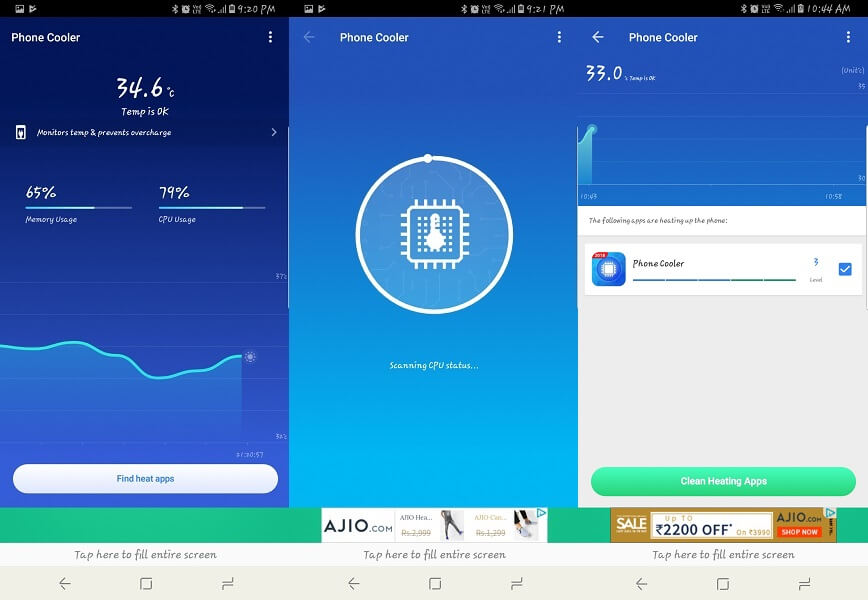 Super Phone Cooler is an app that will track the real-time temperature of your Android smartphone. The app is very nice as the details that are shown are represented in a very cool and simple way. It will show the temperature in both graphical and numeric form and keeps updating every second to provide you with accurate results.

Find which apps are causing an overheat. Once the scan is complete tap Clean Heating apps and the app will begin a countdown of a few seconds. After the time is over it will show how much degree has the temperature dropped. Along with this, it will give a reminder for keeping your phone cool whenever it gets overheated. Smart Charge will help you monitor the temperature and preventing overcharge whenever the phone is charging.

A hot phone is never a good thing to have. If your phone gets too hot it could cause some serious damage to your phone. That’s where these best cooling apps for Android come in, so you can always keep your phone nice and cool. How do you prevent your phone from overheating? Share your methods in the comments below.