We all love reading story books with beautiful images, and comics alike! But that is not all! Many a time, we wonder if we could actually write up a storybook on our own. While that can be pretty hectic if you pen down the whole story and then consequently draw the characters, there’s a second and lot easier method to do the same! Simply use your smartphone. That’s it. There are innumerable apps present both in Play Store and App Store to frame beautiful stories with magnificent graphics and picturesque backgrounds. Some of them even allow for the animation feature. Here is the list of 7 of the greatest story and comic maker apps for you. They are all absolutely free and equally enjoyable too. 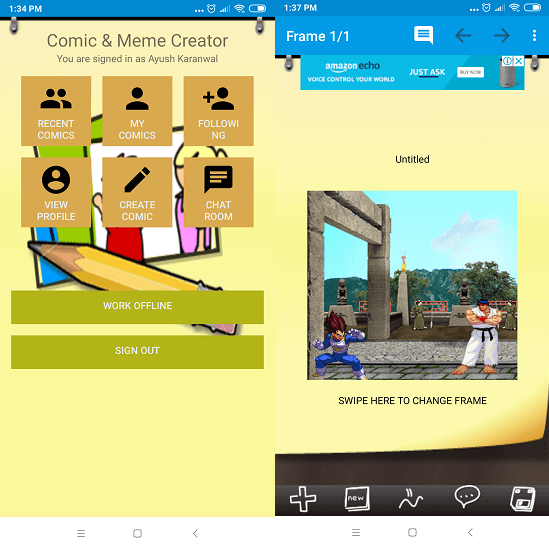 Before starting your project in this app, first, you will need to log in with either your email id or Facebook id. After that, you can begin your work. Working is based on frames. You can create a sequence of frames to make a meaningful story for the comic.

After selecting a frame, you can add people, objects, extra, background, and moving background to it. Apart from these, you can also add meme, effects, faces, photos from the gallery, and pictures from the camera to the frame.

Let’s say, you want to add a text area for making character lines then you have 8 different kinds of text areas for that specific purpose. After adding enough characters, memes, and speeches, you can tap on the preview to check the comic’s story in a slideshow mode. Once done, the comic will be saved in the comic strip format or animated GIF which depends on your choice and save it in your phone.

This is another well-designed app which is adorable and truly a delight to use! Using this app is not only a great way to spend time, but also it presents a great platform to put your imaginative skills to full use. This app allows you to easily add scenes, roles and even render the music effects. Moreover, you can customize the graphics and pictures of your story. For example, You can change the way how the sky appears in your story. You might also want to change the weather to sunny, windy or autumn as per your story requirements.

The default background music which was playing while using this app was so soothing and relaxing that you might become addicted to this app, and want to use it over and again.

Though the app is quite heavy in size, yet it gets justified with the plethora of characters, graphics, sounds etc which this app provides. Also, this app allows you to add animation to your characters.

Although, the app is not very easy, yet we can convince you that it’s not even that hard to use and you will soon gain dexterity in using this app. 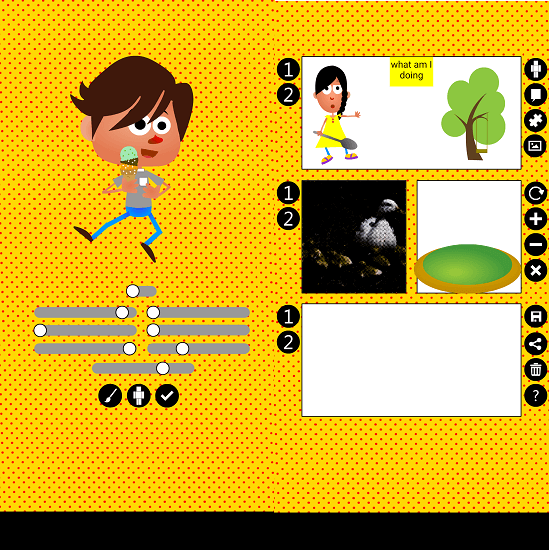 This is one of the best comic maker apps for single page creator rather than creating a complete comic story. It can be used by those people who only want to share a single page of creativity with humor or a message for the audience.

After opening the app, you will get a single screen with multiple options. It can be confusing though as no instructions or labels are present to guide newbies. Users can select if they want to keep a single frame or add another frame for their purpose. Keep in mind, only two frames are available here.

Coming to adding characters part, you can add comic characters by just swiping the slider. And they change every time with the slider. This is the best comic maker app for changing the movement of the characters. You will have the freedom to change the face angle, hand gestures, feet movement, and the direction of the character. There is also an option available to add props to the character like a spoon, ice cream, and many more. This is another story maker app, but with a catch. With this app, you can create stories in the form of a chat. That is, you can make stories in the form of a chat conversation between any two characters. This is a rather novel idea! To create a story in a chat form, you will have to first decide the two characters between whom the chat will take place. You can name the characters anything according to your choice. After that, you can yourself decide and type what both the characters have to say to each other. This provides you the best platform to unleash your knack for tale-telling. You might generate a hilarious conversation which you can share with your friends too.

After the creative work is done, you can play the whole story in a video. That is, all the chat between the two characters that you have created will show up in the form of a video! And how! These days a lot of memes on the internet are based on such chat stories. You should try this too.

And this app is available in both App Store and Play Store!

So, just download this app and start creating interesting stories right away! 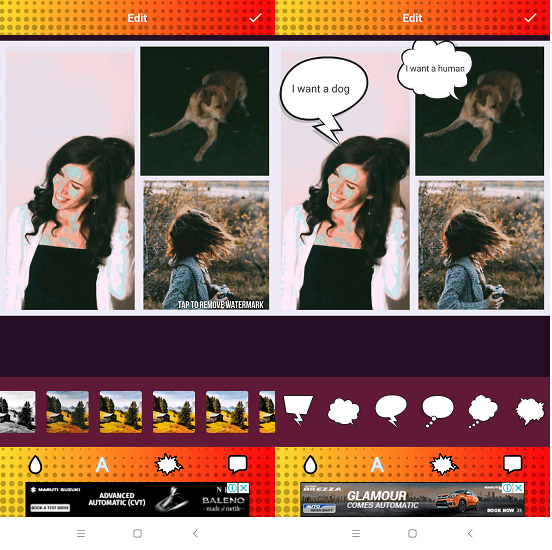 In this comic maker app, you can create comics or memes based on the images present in your gallery. There are no characters or memes available in the app itself. But otherwise, it provides all the tools to make a perfect comic story.

After launching the app, you have two options available to either choose to create a Panel or a comic strip. I have used the comic strip in the screenshot attached. After selecting the format, you can easily add images from the gallery by tapping on the frame.

Once all the frames are filled with the images that you want, then you can add comic elements to it. For example, you have the option to include text, speech, and small props. These all are available in multiple styles. Once completed, you can save it to the gallery or share it on Whatsapp, Facebook, and Instagram. This is another rage comic maker for you. But, this one is for iOS users only. It is a fairly sized app (37.3 MB) with a horde of features to give you the most delightful experience while creating your own set of rage illustrations.

You can add rage faces to your creations from hundreds of readymade rage faces. To add more, this app even lets you import pictures from gallery or even take a picture with your camera in order to invent your own rage faces! You can also add colored text and also easily draw with your fingers. To add further, this app can even customize the rage faces by adding different props like mustache, cap, hair, or even glasses to them! This is undoubtedly an innovative and very distinguished feature of this app, indeed!

Moreover, you can resize the images easily. You might rotate the images as well, or move the items just with a finger swipe! Unlike other apps where finger swipe doesn’t work in such a versatile way.

After creating your piece of work, you can simply share these works with your friends via Twitter, Email, and Facebook. Here, below is the link for downloading this app exclusively on App Store

Since we have already covered a similar app for the Android users, this one is for the iOS users. You will just love it for the ease-of-use and multiple features which it offers. You can invent simple, interesting, and very creative stories with this app. What’s more, even your children can handily use this app to create their own tales. It is because the interface is very easy to use and informative.

Your little munchkins will surely find this very engrossing and entertaining too! What else can be a better idea than this app to involve your young ones in something really productive and creative?

With this app, you can easily create tales and stories in either an e-book or a video format. You can even record your own voices to each page of your storybook. Moreover, you can share the stories on various sites like Facebook, Twitter, and many more. You can even export your story straight away into the iBooks. Isn’t this app just amazing! Just go for it and you are gonna love it along with your lovely children.

With the help of the comic maker apps in the aforementioned list, you can readily create and share your own creative tales, comics and what you got! You can choose any app or even more than one app depending on whether you want to make a pictorial story, a simple comic, a rage comic, or a chat story. We have made sure to cover the apps for both iOS and Android separately. With a little use, you will gain mastery over these apps quite soon.

As story-creation is obviously a work of imagination, thoughts, and creativity, therefore you must have a tad bit of patience while using these apps till you gain ample dexterity in making beautifully crafted stories.

A decent and fun loving person with a keen interest in waking up early, but find it extremely hard. Also, I like deep breathing. It really helps.