This article is sponsored by Ultrasona. We received a compensation for publishing it.

Everyone hates washing dishes, scrubbing laundry, and cleaning between the cracks and creases of hard-to-clean objects.

Thanks to a new ultrasonic cleaner, you may never have to again.

Ultrasona is a portable cleaning gadget that removes stains and kills germs with sound waves. Yes, you heard that right. It reverberates over 50,000 sound waves per second to make virtually anything look like new again.

Or at least that’s the claim. At TechUntold, we recently got a chance to take a look at Ultrasona. Here’s what we think about it. 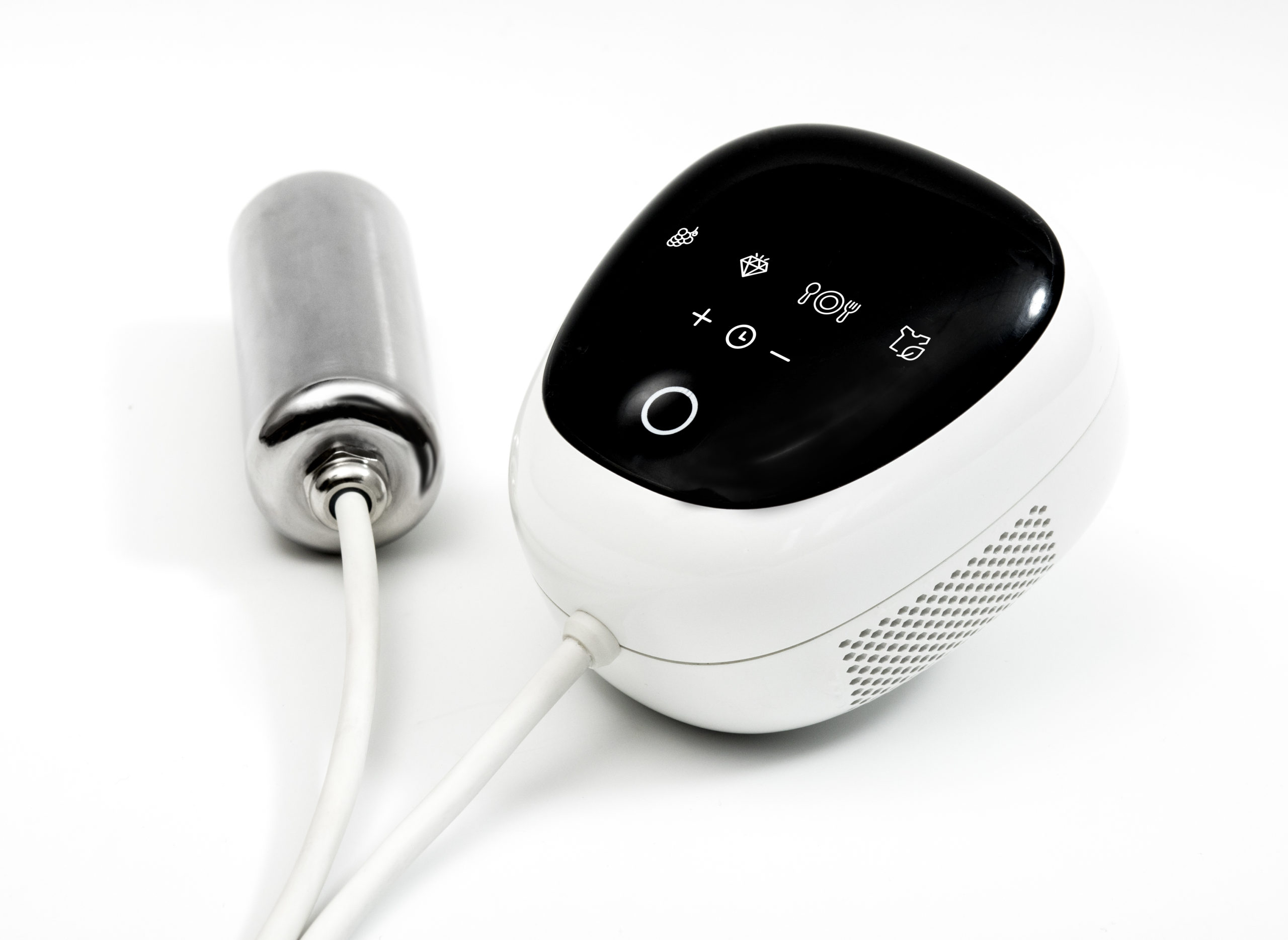 Ultrasona comes in a cardboard box that contains just one piece. The Ultrasona wand is attached by a waterproof cord to the main power hub the plugs into the wall.

Ultrasona’s design is sleek and lightweight. The dimensions are as follows:

The wand is made of durable metal and the plug is composed of hard plastic. The cord is also thicker than most power cords.

It was designed for heavy use and travel, which is good because it’s highly portable. It’s easy to keep in a backpack or briefcase for emergency spills. It could be a lifesaver for students and campers too (given the campsite has a power source).

Ultrasona is well-made and durable. The manufacturer has gone to extra lengths to use high-grade plastic and extra coating for the cord.

How does Ultrasona work? Ultrasonic cleaning isn’t exactly self-explanatory. We’ll break down the key concepts for you.

Ultrasona emits 50,000 reverberations per second through water. These reverberations create microscopic bubbles that bind to objects in their surroundings (like your dirty shirt, toothbrush, or baby spinach).

These bubbles are unstable, and they immediately explode.

These tiny explosions release microscopic shockwaves that blast dirt off of surfaces and obliterate microbial life (such as bacteria). This process has a scientific name: Cavitation. If you want more details, you can look it up (it’s pretty cool) or see it demonstrated in an interesting animated gif on the Ultrasona Kickstarter page.

How do you use Ultrasona? Its functionality is surprisingly simple. Here’s how it works:

That’s about it. It’s much easier to use than a washing machine. There are no dials or complicated controls. Setting the timer is very easy (even easier if you use the presets), and when the timer runs out, Ultrasona turns off automatically. 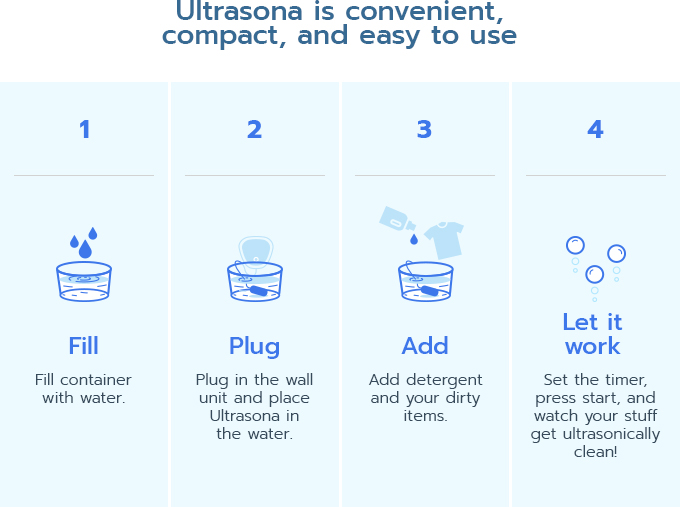 One of the biggest benefits of Ultrasona is that it can be used to clean pretty much anything. From dishes to clothes to jewelry to food, it’s able to clean down to a microscopic level. 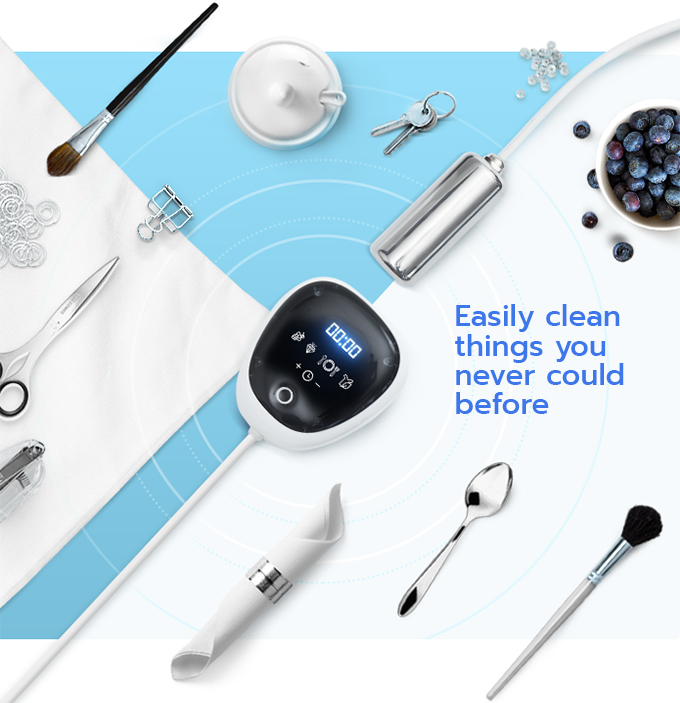 That means it can get into those cracks and crevices that are impossible to clean, like the spaces between stones in jewelry, the hinges of scissors, and the crevices in baby bottles and pacifiers. Just imagine not having to call the handyman anymore to take care of those neglected cleaning jobs.

You don’t have to worry about Ultrasona causing damage to your delicate clothes or fragile belongings.

It’s actually much gentler than a dishwasher or a washing machine. When Ultrasona is working its magic, it never touches your things. The microscopic bubbles do all the work, and the shockwaves they emit are devastating only to microbes and dirt particles.

The cavitation process cleans delicates without the need to touch them at all, guaranteeing a safe and effective wash with no risk of damage.

One large button on the plug turns the device off and on. Just above the power switch is a small clock icon with a “+” and “-“ on either side. These touch-sensitive buttons allow you to manually set the timer. 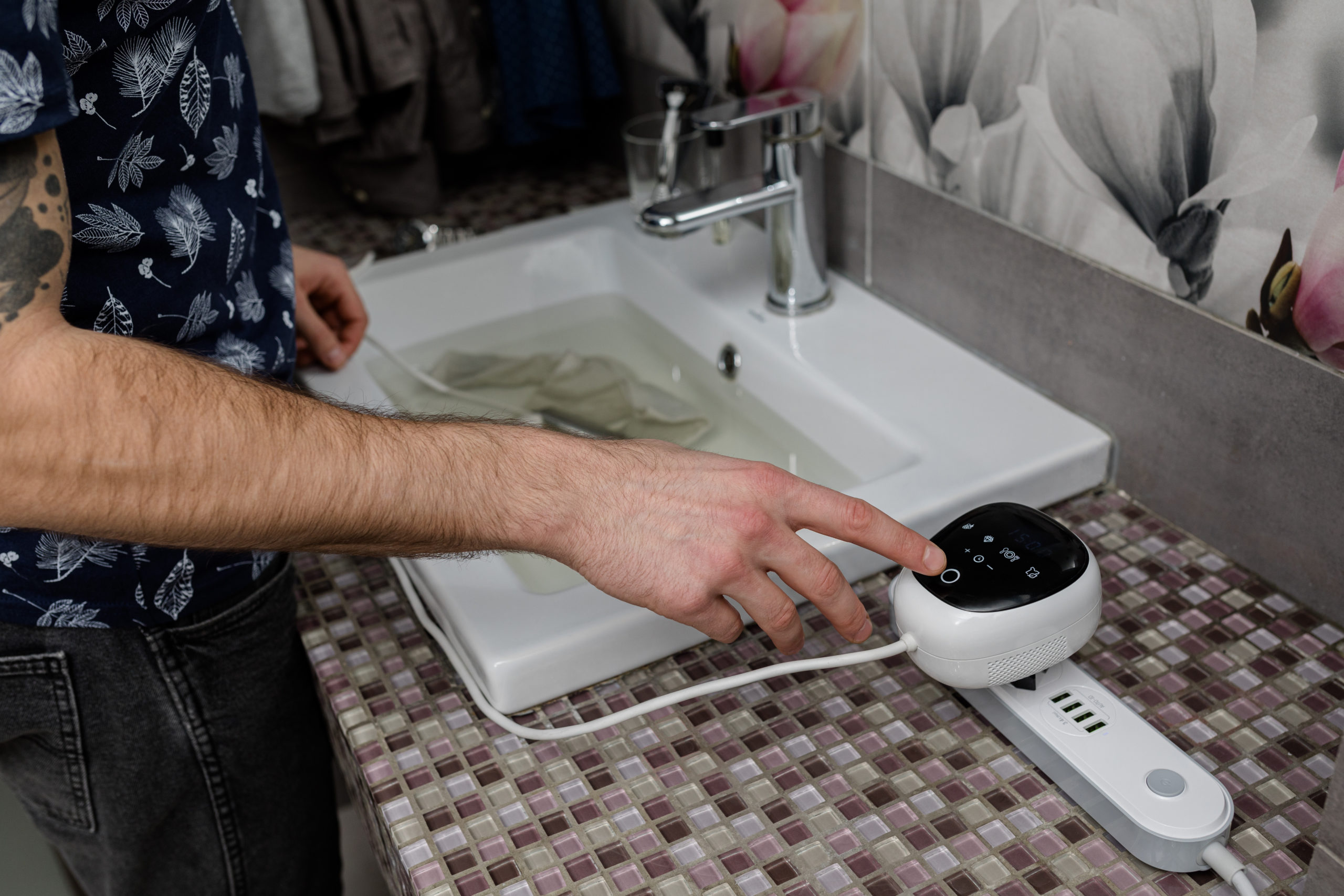 Above the timer controls, you’ll find the smart presets. These are a particularly helpful set of controls, as they allow you to clean specific types of objects at the push of a button. Ultrasona then sets the timer for you and cleans at the optimum power level to conserve time and electricity.

Ultrasona has four smart presets for: 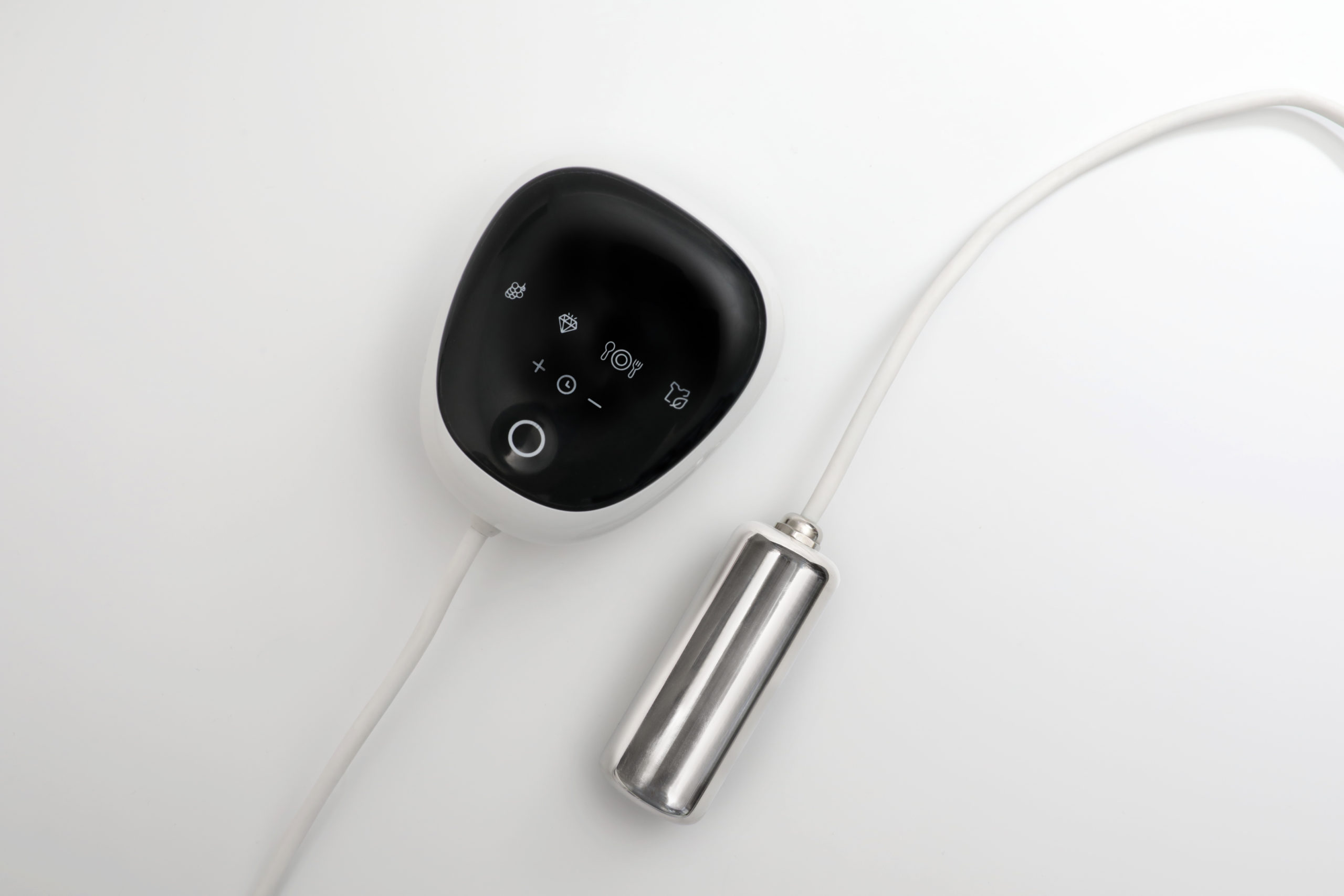 These smart presets are one of my favorite things about Ultrasona. Most people are new to ultrasonic cleaning, so one-touch functionality makes it much more accessible.

Another convenient aspect of Ultrasona is that it turns off automatically. Other cleaners need to be turned on and off manually, but because ultrasonic cleaners work quickly, this can lead to users having to wait around while the cleaner works. Thanks to Ultrasona’s timer and presets, you can let it go while you take care of other business at home.

Ultrasona’s performance was impressive, for the most part. We looked at three different cleaning tests:

The test that most clearly demonstrated the power of Ultrasona was the potatoes.

The dirt lifted from the potatoes, revealing the golden potato skin beneath. It only took 4 minutes before the potatoes were totally spotless.

Ultrasona is a great way to avoid scrubbing in the kitchen, especially because its reverberations kill 99.9% of microbial life. It’s nice to know your food is free from dirt as well as harmful contaminants like pesticides and bacteria.

There wasn’t much difference after about 5 minutes in the water. But after 10 more minutes, there were some clear changes. The ring didn’t glimmer like new, but it definitely shined brighter and looked as if it had been to the jeweler’s for a clean.

The T-shirt was the hardest to clean.

It was covered in permanent marker, which is a pretty tough stain. Ultrasona lifted parts of the stain successfully, but because the T-shirt folded over in the water, it had to be repositioned to get more of the stain out.

In the end, it took over 45 minutes to clean the T-shirt. It was a tedious process, but the stain was removed. If the stain had been small, it probably could have been removed in 5-10 minutes.

Overall, Ultrasona appears to work well. It’s definitely a valuable tool in the kitchen. You can expect it to clean other things too, but it might take a bit more time than advertised.

This is not a bad price, considering most ultrasonic cleaners for home use run in the $200-$300 price range (and most are not as advanced as Ultrasona).

But, new Ultrasona customers can pre-order a device for just $95.

Ultrasona is not yet available commercially. It’s currently fundraising on Kickstarter in order to begin mass production. Luckily, Ultrasona has passed its funding threshold and will be shipping in June. But new backers can still take advantage of pre-sale pricing.

It’s one of the most feature-rich ultrasonic cleaners and costs less than half the price of its competitors. The only downside is that you’ll have to wait until June to receive it. 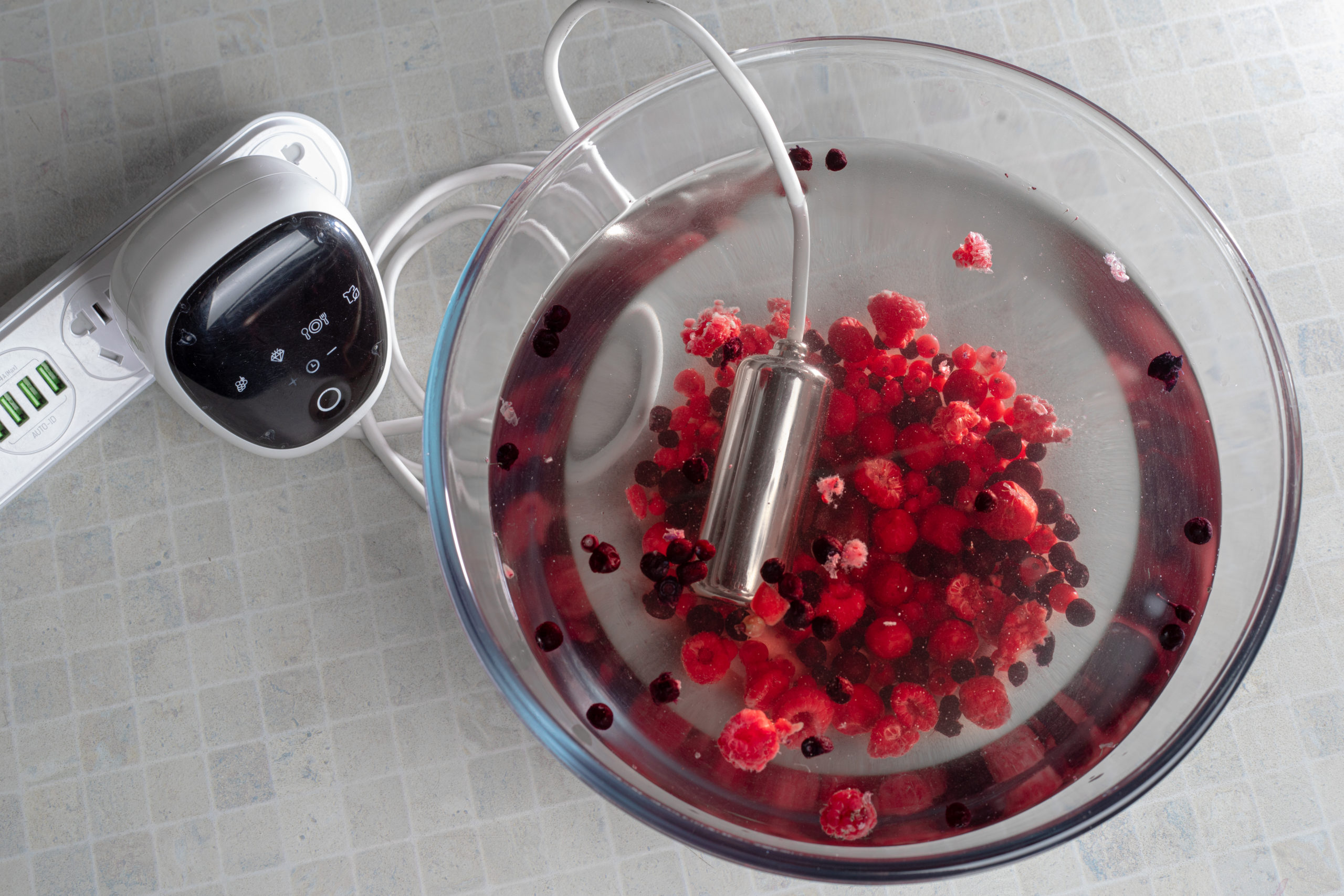 Does Ultrasona improve the way you clean?

We can safely say yes.

Ultrasona makes it easy to clean things that you couldn’t really clean before. Without ultrasonic cleaning, there isn’t a convenient way to clean jewelry, tools, toys, and personal care items. For other things that you’re used to cleaning, such as stains, food, and dishes, you can now clean without scrubbing and running through the washer over and over.

To top it off, Ultrasona is portable, affordable, and economical to run. It uses 40x less water and 15x less energy than a traditional washer.

We recommend Ultrasona to people with families, those who like spotless homes, and Airbnb hosts who need to clean quickly and thoroughly.

Ultrasona won’t replace your dishwasher or washing machine (you’ll still need those for big jobs), but it’s worth having one around the house or in your bag for stains, spills, and everyday cleaning.

If you’d like an Ultrasona for your home or are interested in learning more about ultrasonic cleaning, , check out Ultrasona at ultrasonacleaner.com. 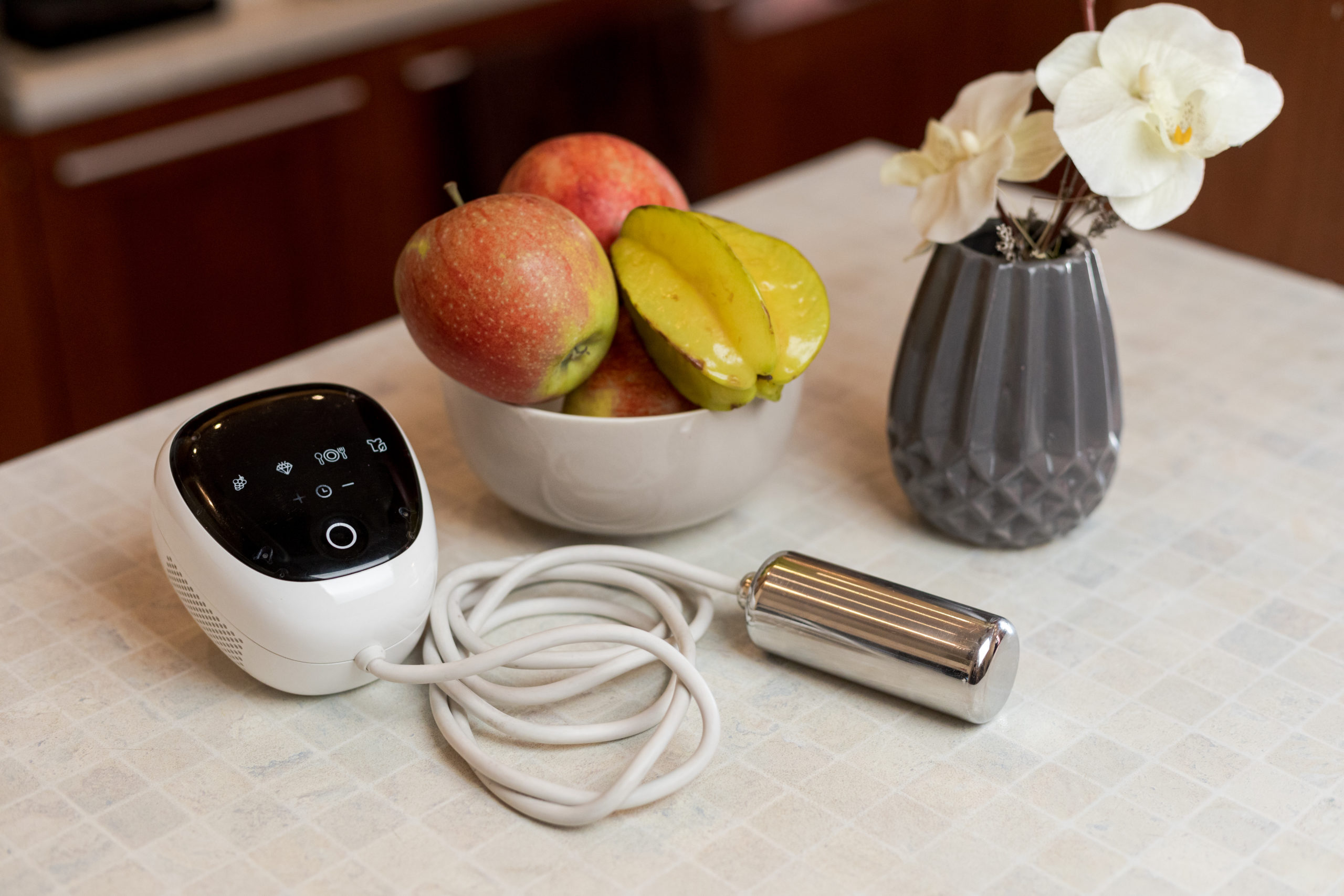 Tech editor and senior writer Michael Duong is passionate about technology and innovation. He codes open-source projects and plays quiz games in his free time. An expert in his field and an avid learner, always seeking to expand his knowledge and skills in the ever-evolving world of technology. Follow him on Twitter and Github.