This article is sponsored by TunesKit. We received a premium license of TunesKit Spotify Music Converter software so that we could try it out and share our honest review. Even though sponsored, the complete content and opinions are sole views of the author based on their experience with the software.

Take the music away from this world and you’ll see that this world is nothing but just a lonely place. And when it comes to the audiophiles, their life without music is a dead-end. But many times in your lives, this situation might actually have occurred when you craved to listen to your favorite melodies. Maybe while you were hicking, tracking or while you were at someplace where the internet was not accessible. At that point, you must have wondered, how amazing it would have been if all your Spotify songs were available locally on the phone.

Well, it’s not just a fancy talk we are doing here. It’s actually possible and with one of the best music converter software. Yes! We are talking about the Tuneskit Spotify Music Converter. This amazing software removes DRM protection from the Spotify songs and easily get those songs offline on your device. So let’s start with the TunesKit Spotify Music Converter review and see if it’s really worth the money.

How To Download Songs From TunesKit Spotify Music Converter

The interface of the Software is so much simplified that no one can face any problem converting the songs using it. Even then we are guiding you with the basic steps on how to use the TunesKit Spotify Music Converter.

2. Once you launch the converter, the Spotify app also opens up automatically. Now, drag and drop the Spotify song(s) that you want locally on your device. You can also copy the song link and paste it in the search bar given at the top.

3.  Click on the Convert option given at the bottom right after that.

4. The desired song, playlist, album, has been converted. You can view the converted file directly in the folder by clicking on the folder icon. 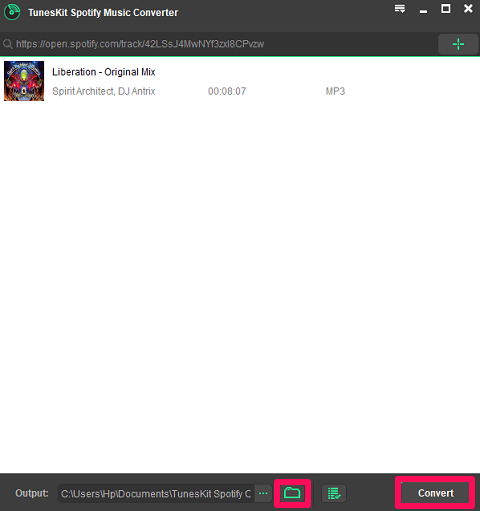 After learning about the steps to use the software, let’s move on to its system requirements. It’s because, the first thing you should know is, whether your system is compatible with the requirements of the TunesKit Spotify Music Converter or not.

The software can be used with both Windows and macOS devices. In Windows, Vista, Windows XP, Windows 7, 8 and 10 (both 32-bit and 64-bit) are compatible with the TunesKit Spotify Music Converter. Your Windows device needs to have at least a 1G Hz processor with 512 MB or higher RAM. To support the software properly, the monitor or the screen of your device should be of 1024×768 or higher pixels.

Other than these system requirements, another important thing that both devices need to have is a Spotify app.

This amazing software is adaptable to Spotify in almost every way. While using TunesKit Spotify Music Converter, you can not only convert the songs but also the artists, albums, and the desired playlists very easily. Converting the Spotify podcasts using this software is also not a big deal.

The TunesKit Spotify Music Converter allows its users to convert the Spotify songs in a total of 6 formats. These are MP3, AAC, M4A, WAV, M4B, and FLAC, the most common formats in which the songs are available.

Other than changing the audio format, other output formats can also be modified according to your needs. These modifications include Channels, Sample Rate, and Bit Rate.

The Single Licence of the paid version of the software costs you $29.95 in both Mac and Windows. In the Single Licence, only 1 PC can be used. Whereas, it costs $39.95 for the Family License, supporting a maximum of 5 PCs. When we talk about the trial version, it is absolutely free of cost. We tested out both the free as well as the paid version of the TunesKit Spotify Music Converter. To our surprise, there was not much difference between both of them. The only thing lacking in the free version is that you cannot convert the songs for more than one minute. Other than that, both the paid as well as the trial version works exactly the same.

Well, the purpose of the purchase can be different for different people. And the same reason either insists you or resists you in going for that product. If you are one of those people who want the Spotify songs offline without making any compromise in the quality, you can go for the software without any second thoughts. If you just want the songs offline on your device and absolutely flexible with the quality, you can look out for other substitutes available.

So what are your thoughts about TunesKit Spotify Music Converter? Do you find the software suitable for yourself? Tell us in the comments below.