The use of smartwatch is increasing day by day, not just to watch time, but to do so much more. From GPS to Camera, everything is available in the latest smartwatches. A lot of companies are coming up with more advanced smartwatches, to set up a place for them in the increasing smartwatch market. And to do that, they are constantly trying to include more and more features in a smartwatch, without compromising its comfort factor.

One of them is Thor Pro 3G by Zeblaze , which I used for a week and so far, I haven’t been disappointed. It does stand out among the crowd in some regards with a few shortcomings.

I’ll be sharing my opinion on it through this review. So let’s get straight into it.

What’s In The Box?

The watch comes in a cardboard packing which is strong enough to protect the following content of the box in transit.

With a single color choice of black, the watch has a round structure with an appealing and premium design.

It comes with a 1.53-inch touchscreen which is protected from scratches and shocks by the Gorilla Glass. The steel alloy body which is held to the silicon straps with 4 tiny screws makes it strong enough to last longer in outdoor environments. The silicon straps are soft around your wrist, yet strong enough to hold on against great amount of pressure. So you can wear it tightly while lifting heavy weights in the gym without tearing the straps apart.

It has 2 buttons mounted on the right side of the watch, with a camera in between. Whereas, on the left side it has a steel cover to protect the SIM slot, which is held to the body with 2 screws. And finally, on the back, it has a heart rate sensor as it is supposed to be really close to your wrist and four charging pins beside it.

The sensor gives out a green light when it is put to use by turning on the heart rate monitor.

All in all the design of this watch is great, but it would have been even better if the watch was water resistant.

And not being protected against water can be a big disadvantage for some people. Especially for those who want to use it while doing some water activity, like swimming.

The watch has a 1.53-inch IPS touch full round display with a 320*320 Resolution. The display is protected by the Corning Gorilla Glass 3 covering, which is pretty great. The touchscreen obviously makes the navigation much easier as compared to the button interface.

However, the touch isn’t that great as you may think.

For me, the touch being too sensitive was a downside because I accidentally kept clicking on options while scrolling down the menu.

And this wouldn’t have been a problem if there were any sensitivity settings for the touch. But sadly, there isn’t any option to adjust the sensitivity. But still, despite being a little careful while using the touch, I was still satisfied with it.

This watch is equipped with a MediaTek MT6580 processor with a clocking speed of 1GHz. The Quad-core processor comes with 1GB RAM and an internal memory of 16GB, which is quite impressive. It doesn’t come with an external SD Card slot. But still, with 16 GB internal memory and 1GB RAM, the watch works perfectly smooth. I have been using this watch for a week and have been exploiting every feature continuously. To be honest, I was thinking that it might slow down because of that. But surprisingly, the watch didn’t hang back even for once.

While being strong in Hardware performance, the camera lacks in regards to software. Zeblaze Thor Pro 3 has an Android Lollipop 5.1 operating system and is compatible with both Android and iOS devices. So you can download and use various third-party apps in your watch. But using too many third-party apps might not be the best thing to do.

Firstly, it gets really difficult to use those apps in such a small screen.

Like you’ll see a cropped version of the app on your screen which means the software isn’t optimized for the watch very well. And secondly, while using third-party apps like YouTube, the device started heating up. Although, the heating wasn’t a concern when I was only using the Inbuilt features.

The smartwatch has a SIM card slot on the left side which supports a 3G Nano Sim. So you can uncover the SIM slot with the help of the screwdriver and insert a nano sim card in it. And with the SIM card inserted, you can call, send messages and use the internet directly from your watch.

Now, let’s talk about this watch’s most amazing feature, which is Bluetooth calling. So if you don’t want to insert a SIM card in the watch, you can still call and talk to someone directly from your watch, after connecting it with your phone via Bluetooth. The thing that impressed me was the call quality. I was talking to one of my friends through Bluetooth calling for about half an hour. And my friend on the other side of the call was able to hear me clearly even when I was walking with my hand moving that too outdoor in windy conditions.

You’ll also get notifications of your phone directly on your watch, which can be dismissed from the watch itself. This feature surely is amazing, but the thing that frustrated me was that I stopped getting notifications on the watch after a day or two. I even tried connecting it to another smartphone, but the problem was still persistent.

The watch also has GPS and WiFi connectivity, so you can track your speed, location and get directions by using the GPS. And you can access the internet by connecting the watch to a working WiFi.

The camera mounted between the 2 buttons on the right side of the watch, gives you grainy yet workable picture quality. But obviously, you can’t expect an outstanding picture quality from a 2MP camera. Here are a few images that I took from the camera to test the quality.

The Heart Rate Monitor in the watch helps you track your heart beats, and the rate shown for that is quite accurate. And with that, the Pedometer in the watch can also track the total steps taken by you throughout the day. You can set a target for the steps and compare that with the actual steps taken.

The “Screen on Raising” gesture wakes up the screen every time you raise your hand to watch the time. This really saves us from the frustration of waking up the screen through the buttons.

The watch has quite a few features. Like it comes with multiple formats of clocks, which can be changed with a single touch. So you can decide how do you want the clock to look like. Like at first, I was dissatisfied with the default format of the clock. But I was thankful when I found out that I can choose from various other formats.

You can also control the music on your phone through your watch and listen to it directly from the watch itself. The audio quality of the watch is pretty great, you’ll feel like you’re listening to the songs on your phone.

And finally, after connecting your watch with the WiiWatch app, you can control your camera from the watch.

Which means you can place your phone somewhere else, and the remote capture feature will automatically turn on the camera on your phone. Now, you just have to click on your watch’s screen and the phone’s camera will capture and save the picture in your phone’s memory. Without a doubt, this is an amazing feature, but this also comes with a flaw. Like, I kept clicking pictures using the remote capture, but almost all the pictures that were taken transferred into my phone’s memory after many hours. And until I could actually see the pictures on my phone, I was confused if the pictures were captured or not. 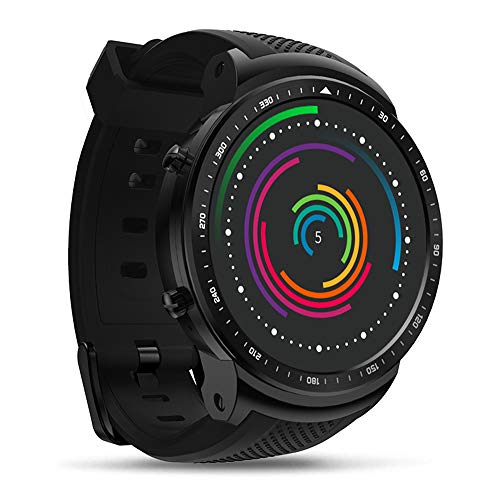 Product prices and availability are accurate as of the 2021-01-26 and are subject to change. Any price and availability information displayed on TechUntold at the time of purchase will apply to the purchase of this product. Affiliate links / Images from Amazon Product Advertising API. Amazon and the Amazon logo are trademarks of Amazon.com, Inc. or its affiliates.

The watch is equipped with a 500mAh battery and uses magnetic charging. It comes with a charging dock which can be placed below the watch. You have to insert the USB cable in the charging dock and power the battery through your laptop or your phone’s adapter.

The battery life of the watch is not something to be excited about, but still, it does gives a satisfactory performance.

So the watch has 3 power modes, Low, Medium and High.

The watch doesn’t come with a charging brick like many other smartwatches.

So, for charging, I recommend charging the watch using an appropriately powered adapter to prevent the battery from any damage. In my case, it took approximately 2 hours to charge the watch to its full capacity.

There are amazing things about this watch like Bluetooth calling. And there are flaws like touch being too sensitive or Bluetooth getting disconnected when using the mobile app.

But after using this watch for about a week, we can say that this watch gives a satisfactory performance.

So, you can still go with this watch if you want a decent smartwatch.