The mobile gaming industry has taken a flip after the introduction and popularity of battle royale games like PUBG and Call Of Duty Mobile.

Most of the mobile phone games do not require extra-ordinary skills, super fast reflexes, and quick decision making. But this is not the case with battle royale games. Here you need all the concentration and super-fast movement of the fingers, or you’re dead meat.

This is where the claw grip has started becoming popular where gamers use their thumbs and fingers simultaneously to play the games. But this is not something that can be learned within a day.

So in order to assist the people who find claw grip troublesome, mobile phone game controllers are becoming popular.

And today we are doing the GameSir F4 Falcon review, one such mobile controller that promises to enhance your mobile gaming performance. 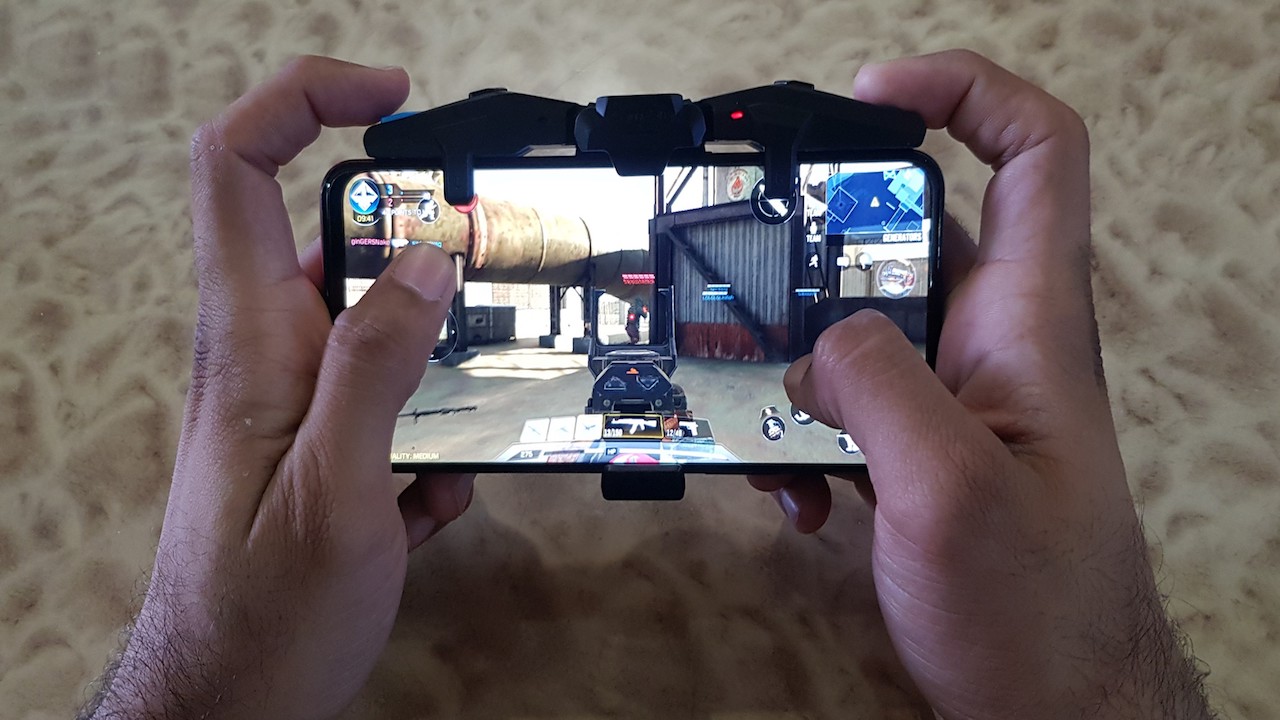 Being a gaming addict myself, I have tried out a lot of mobile gaming controllers. But the packaging that I received for the F4 Falcon controller was so far the best. 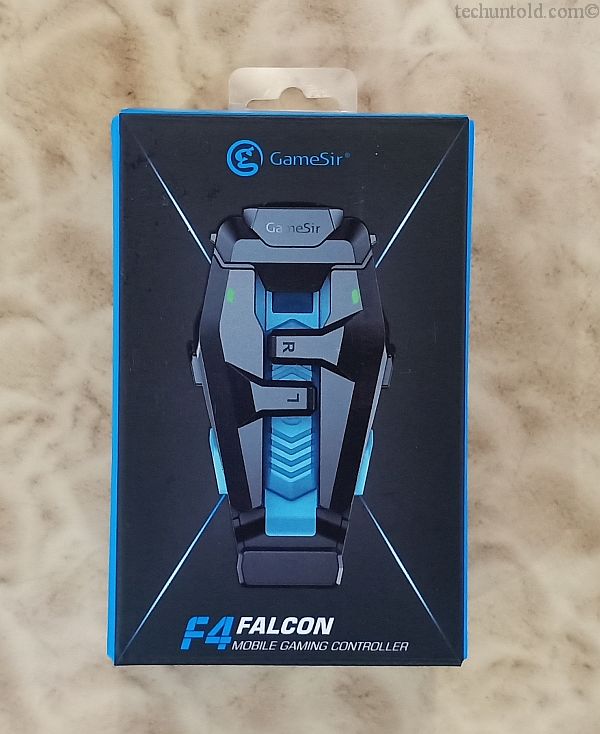 And here’s all the content that was inside the box: 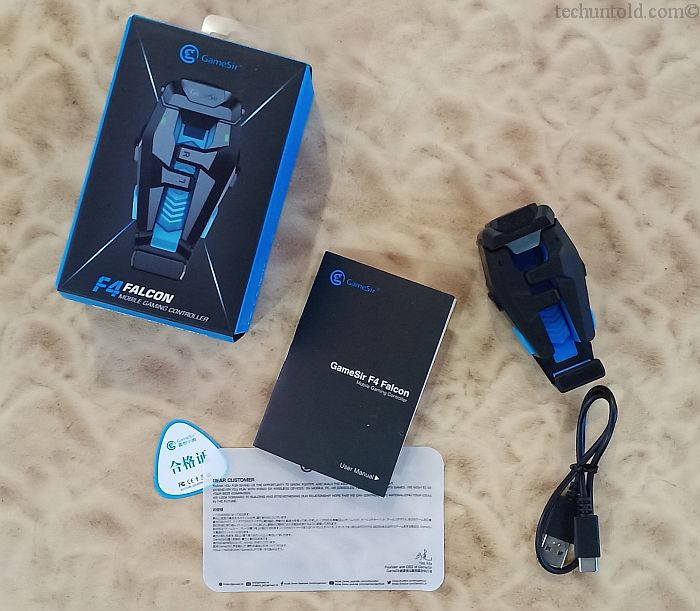 The design of the F4 Falcon Mobile Gaming Controller is simply mesmerizing. It feels like you’re holding a futuristic gadget, just like GameSir G6 Controller.

The controller is made of hard plastic to avoid any damage while fitting the phone or when it falls down. The back, top, and bottom parts of the controller are packed with a rubber cushion for the safety of the mobile device while you are enjoying your game.

F4 Falcon Mobile Controller is compact in size and ultralight. The foldable wings make it easy for you to carry the controller in your pocket without even realizing that you’re carrying it. 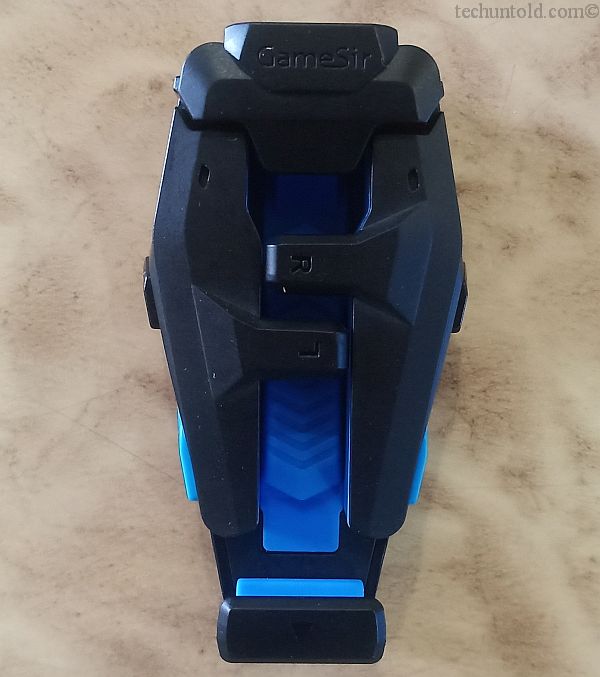 While checking out the product for the first time, I noticed a very interesting thing that can be the evidence of the careful design of the controller.

The bottom rubber part of the F4 Falcon can be seen as having a little gap. The purpose of this little gap is to avert the pressing of the power button after you fit your device in the controller, hence providing an uninterrupted gaming experience.

Most of the F4 Falcon competitors provide rubber touch-points. And there are high chances of clicks getting missed with them. But the F4 Falcon gaming controller provides mechanical touch-points that work as an actual tap on the screen. This means that your every click on the button gets recorded and further executed without a chance of missing.

Now we know that F4 Falcon has an absolutely nice and clean design, and the same goes for its features as well.

The controller has four buttons in total: two blues ones and two black ones. All of them located on the top.

While playing games like COD Mobile, PUBG, and Knives Out, the blue buttons are mostly used for shooting purposes. And because the button is present on both sides, this makes the F4 falcon an ambidextrous gadget.

Coming to the black buttons next to the blue ones, they are called the Turbo buttons and they too are present on both sides.

Now, the Turbo buttons are something that makes this controller far better and more advanced than its competitors. The use of the Turbo button is to set the burst mode, which means the number of bullets to be shot from the gun in one click after you press a blue button.

One thing could have been better in the F4 Falcon Controller. Just like VX2 AimSwitch Combo, this mobile gaming controller also lacks the actual battery indicator. It means that you have to depend on the flashes of light rather than seeing the actual battery percentage.

To give an honest review for GameSir F4 Falcon, I need to tell you that I tested the product with PUBG and COD Mobile games.

I was experiencing an enhanced performance even in my first PUBG match that I played after attaching the controller to the mobile. So I’m quite sure that anyone who plays PUBG with this Falcon Controller is going to love this gadget after a few matches.

As of the gadget test with COD Mobile, it was a bad experience for me.

I don’t know what actually was the cause of the problem, but the buttons were not able to execute the given commands properly. The guns were shooting bullets in an uneven manner and sometimes there was no shooting at all. 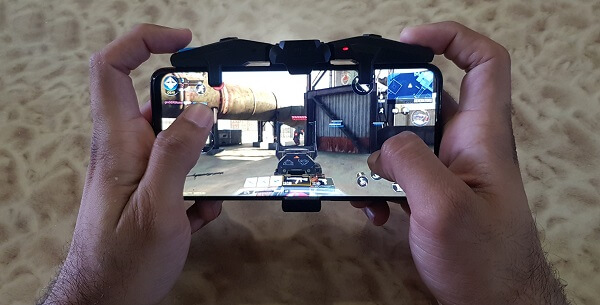 Battery backup counts as a crucial feature while purchasing a gadget. Especially when the gadget has to be selected by a gamer, the company needs to make sure their product gives a long battery life.

GameSir F4 Falcon impressed us a lot in this area. The gadget gets completely charged in a maximum of 2 hours and you can savor the games for almost 30 hours in a single charge.

Both Android and iOS devices are compatible with the controller.

And almost all the Android and iOS devices are designed to comply with these requirements.

Here we would like to give a rest to our GameSir F4 Falcon review.

The design is flawless, performance is up to the mark, and good battery life is what a gamer would expect from a gaming controller. It is certainly incomparable to other similar mobile gaming controllers in the market.

So if you’re really planning to go for a mobile gaming controller, F4 Falcon should definitely be your choice.