How cool will it be to drive a tank? Most of us wish it at some point, but unfortunately, it is not that easy to drive an actual tank. Though you can have an experience of how to drive a tank and use its amazing abilities through games. There are different kinds of tank games for Android that you can play on smartphones.

Most of the games will have the same feature where you will have to drive a tank, control its directions and use all the weapons. It is obviously a mechanical beast that you can control. You will have to fight your enemies and destroy everything that comes in the way. Most of these games are war based tank battle games, but you can also play games with different themes and gameplay. Without taking any more time, have a look at these best tank games that you may like. 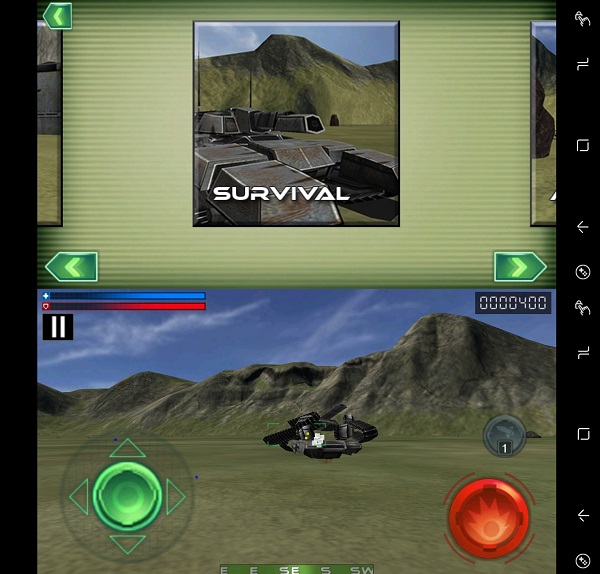 This is really a small game, though its size will vary in various devices, still, it is the smallest in the list compared to what it provides. This game has decent graphics and 5 modes with different task and missions. You have to drive a tank with all the cool weapons and shoot other tanks, enemy buildings, helicopters etc.

In Hold the fort mode, you have to protect a fuel reserve from the enemy by destroying their tanks. Survival will allow you to fight against the enemy tanks and defeat them before your life gets depleted. In Ambush, you have to face different kinds of tanks and machinery, each more powerful than the earlier. This way you will learn to defend the waves of the enemy. Apart from this, you can play Operation beta and Pocket resistance to destroy the enemies base and weapons.

The method of playing is simple with onscreen controls. For driving controls, you can swipe your thumb. Accordingly, the left side and right side for using the weapons. Or you can swipe your finger through the screen to rotate the view. It also allows saving the progress for each mode of the game so that you can continue from where you left. 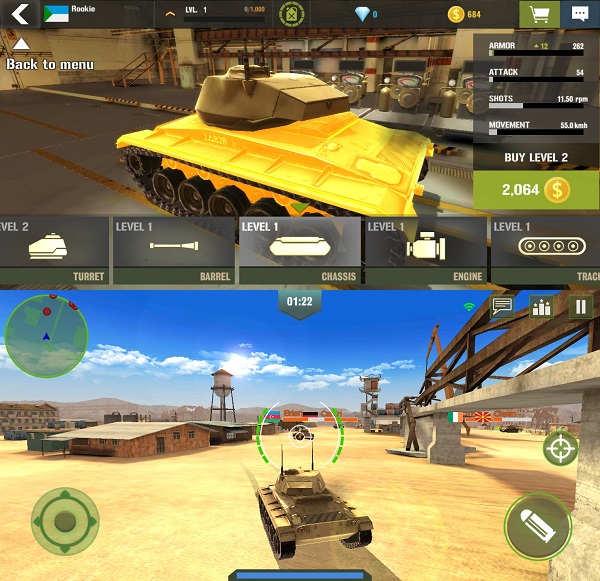 Fight your enemies or challenge your friends in this amazing multiplayer tank game. As compared to the above game, this game has much better graphics and different kind of modes to play with. This is a war based games where you will get to battle against online players from around the world.

You can play 3 minutes battles and represent your country in the game. In these 3 minutes, you will have to destroy as many tanks as you can in order to win. It allows creating clans, having team matches and battle against the groups.

The method of playing is the same as the above game with onscreen controls. There are various kinds of tanks with different strength and weapons that you can unlock and select to play. It also allows customizing the style, upgrading different aspect of your tank’s tech to improve its strength and capabilities. 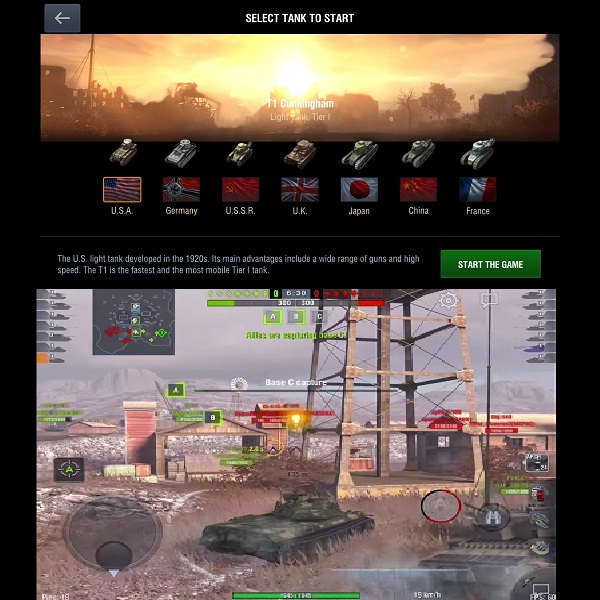 Yet another war based tank game with amazing graphics and thrilling gameplay. Here you will get to control and drive a heavy military tank. There will be various enemy tanks, vehicles, helicopters etc that you will have to destroy in order to win the game. The app allows upgrading and downloading new resources to improve the capabilities of your tanks.

Most of the machines in the game are created and designed by Peter Pound, Principal Vehicle Designer of Mad Max: Fury Road. This game allows creating groups and playing matches between the clans just like War Machine game. In addition to that, you can play in 23 different locations and play matches with other teams in a 7vs7 battle. The game has some great modes like Halloween and others which will give a new look and theme to your game fields. 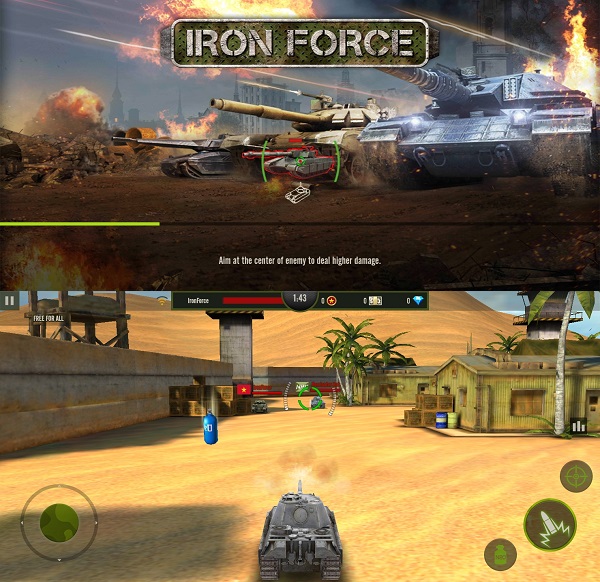 This game is quite similar and the perfect alternative to World of Tanks Blitz. You can play online matches with your friends or players from around the world. If you defeat them you will earn credits and powerups. It has various levels and locations like Desert, City, etc. All the locations after the Desert can only be unlocked once you complete the required game level. In these locations, you can play in three different modes i.e Free for all, Team and Finders Keepers.

The controls are also similar to the above game with only one difference. Here you will not get the option to swipe the screen or even change the direction. You can only use the onscreen buttons for moving and shooting the weapons. Like other war tank games, you can create teams and battle against each other or complete daily tasks to earn some extra credit. 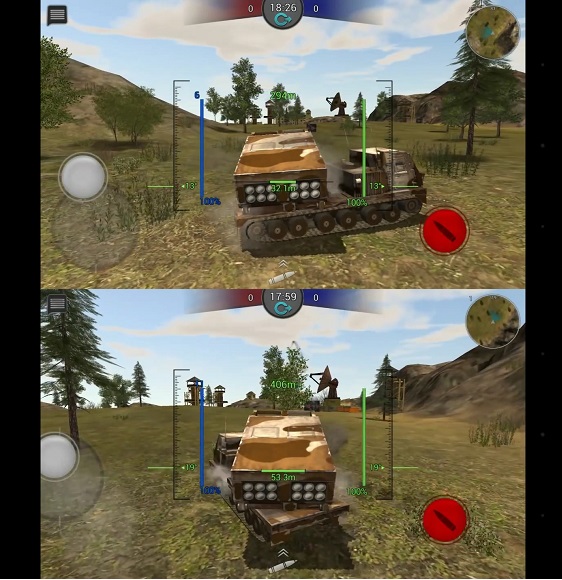 Tanktastic will let you drive some heavy military tanks and machinery form WWII till our time. You can select from 150 different vehicles with amazing and unique artilleries. This game has modes like Deathmatch, Team Deathmatch, Capture the flag and Control points. All these modes will have different kinds of mission and objectives each with new difficulties.

Apart from this it also has an Offline mode where you can play with the AI bots. You can play from 12 different locations and maps like hills river, buildings etc. It also has a training mode where you can practice the game perfectly before getting to the real matches. This game is really the best one in this list with superb graphics and gameplay. 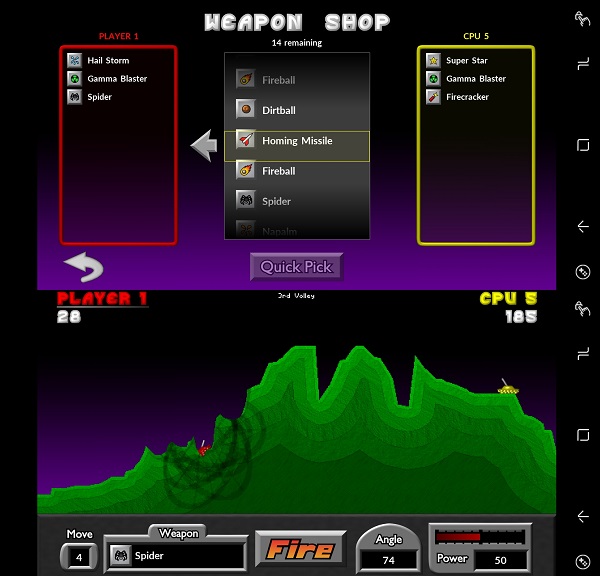 Pocket Tanks is a game which will provide you with a different aspect of tank games. This is a renowned game which was earlier available just for PC and desktops. Now you can also play it on your Android devices. It is a simple one-on-one PVP tank battle game. Unlike the other games in the list, it does not have great graphics or controls but it is fun to play.

You will get to play with CPU, Two Players in a single device(turn-based) or Local Wi-Fi with two devices. It also has an Online mode to play with other players. There will be an option where you can select various weapons that you will use in the game.

Once the game starts, your aim is to earn more points than your opponent by shooting on their tanks. The tanks will be in different locations facing each other. You can set the angle and speed of the weapon according to the distance of the tanks. It will also give you a few moves in each game to move the tank left or right if needed. 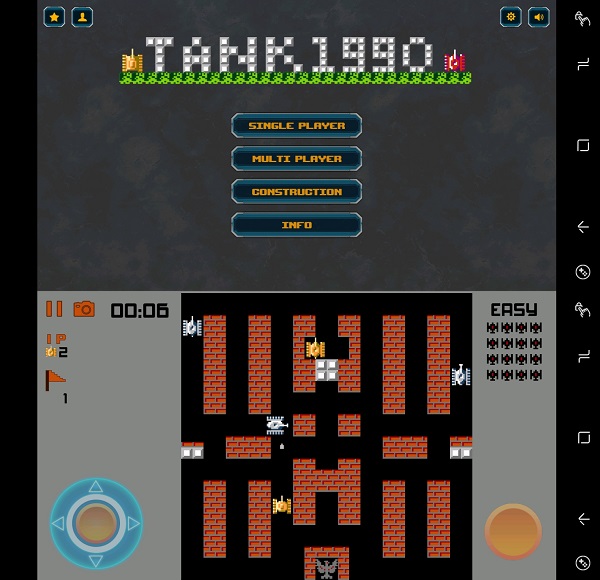 If you are a real gamer, then I am sure you will feel nostalgia after installing this game. It is a game which was available for the old NES gaming consoles. This is one of the best offline tank games for Android where you have to defend your home(eagle inside the wall) from the enemy tanks.

You have to destroy all of the tanks coming towards you in each level in a single player match. It has stage and campaign mode in the single player matches with different difficulty. The level and numbers of the enemy tanks will increase as you progress in the game.

There are powerups that can be used to take advantage of the field and gain special abilities. In addition to that, you can play this game in multiplayer mode by connecting the device via Bluetooth or Wi-Fi. Apart from that you can also create your own custom levels and make maps as per your desire. 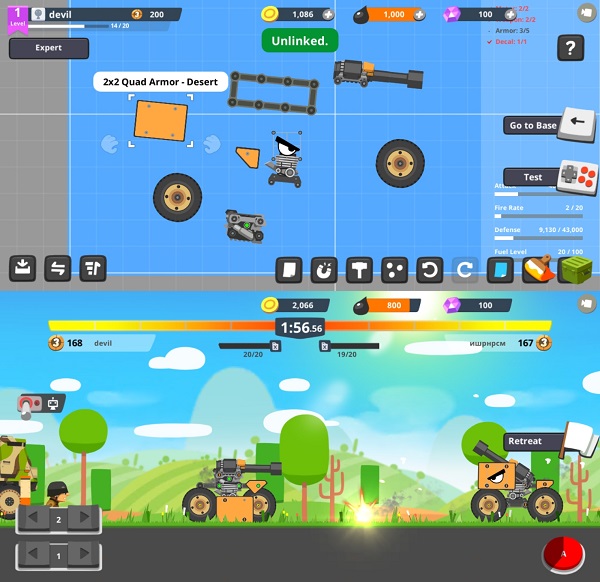 Super Tank Rumble will not only let you fight with opponents but also build and customize your own tanks. It allows creating your own tanks, tractors, etc by combining parts and techs that you can use in the Hanger. There is an option to Find Match, where it will search for the opponents you will battle against. You can earn coins by defeating the players in online battle.

This game has resources like gold, oil, gems, blueprints etc. Collect these resources to make new and more updated tanks. You can upgrade accessories, parts and unlock different kinds of tanks with these collected resources. To control the tank there are 2 buttons on the left. 1st to controls the movement of the tank and 2nd to control the angle of the weapon.

On the right is the weapon shooting button. It also has an autopilot option. Here you just have to shoot the weapons and the tank will drive itself. There are campaigns where you can complete daily quests to earn some extra credits and increase your gaming levels. 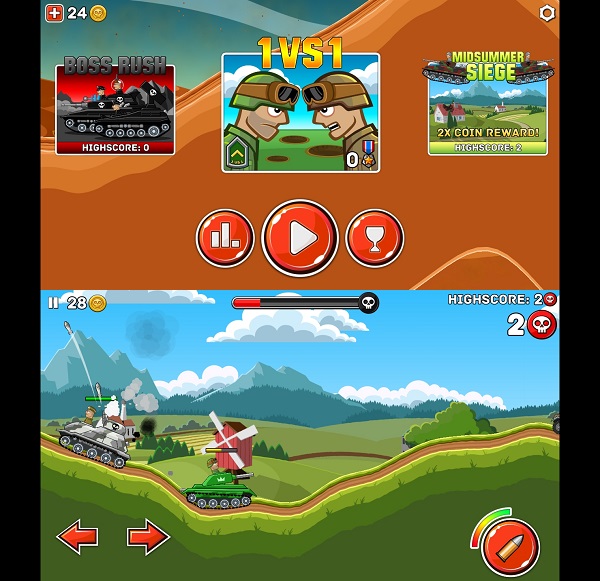 If you are looking for a fun tank game that can be played by anyone then this is for you. It is similar to the Hill Climb Racing game in respect to the theme and stages. The aim of the game is to defeat all the opponents in your way scoring as many coins as you can. You will get different locations like Midsummer Seige, Winter War, Desert Assault etc. These locations will have various difficulties and reward system. To unlock the locations you will need to have the required coins accordingly.

In addition to this, you can also play online 1vs1 matches or Boss Rush mode in this game. As you progress and earn experience you will get promoted to higher ranks. It allows buying different kinds of tanks and weapons with the coins or you can make in-app purchases for the same. You can also upgrade your tank’s Armour, Gun and Engine to make it more powerful. 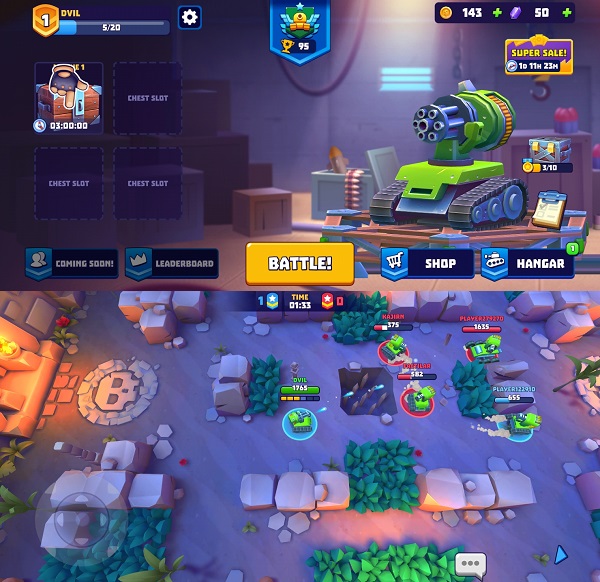 This is a fun multiplayer game and is similar to Super Tank Rumble but with distinct graphics and gameplay. It allows creating your own custom tanks by combining different weapons, base, and equipment in the Hanger. You can upgrade the tank to increase the level and strength of your game. As you progress through the levels you will also increase league rankings and earn trophies. These ranking will unlock new weapons and equipments for your tanks.

Talking about the modes of games, here you can play Deathmatches and team up with your friends to battle in a 3vs3 mode. The method of playing is simple, steer the onscreen button for moving around. And to shoot the weapons just tap on the tank you want to target. You can also communicate with your teammates by short messages that can be sent while playing the game. Apart from this, there are challenges that you can use to earn some extra credits.

Most of the games on the list will provide you with the basic training on how to play it. This way it becomes easy not only to understand the game but also how to strategize your gameplay. If you are looking for a real tank game with all the thrill then World of Tank Blitz and Tanktastic 3D are the best choice. But if you are not a hardcore gamer and just want some fun tank games then you can select from any of the game from Pocket tanks till Tanks A lot!