Bowling is not just a game, but a perfect way to get along and relax with your friends. Though it is a great game unfortunately not all of us are able to get to the bowling alley to play it. Either we don’t have the money or the time to go out and play this game. Worry not, there are plenty of best bowling games for Android that you can enjoy playing without having to go out or pay for it. 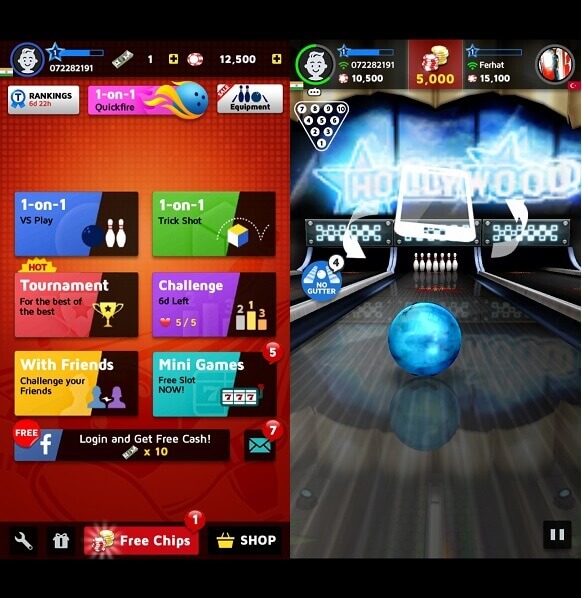 Throw the ball and hit some strike by dropping all the bowling pins in one shot with Bowling King app. This is an online multiplayer game where you will get to play with people around the world.

You can play from different 1on1 game modes like VS Play, Trick shots, and  Tournaments to win the chips from other players. If you want to win a huge amount of chips in the game then you can go for 1on1 Quickfire mode. It also has Challenges which you can play to earn some extra credits in the game. You can also challenge your Friends to play by connecting via Facebook.

The game is simple to play, swipe to roll the ball and control the movement of the ball by tilting your device accordingly.  You can buy different balls pins and equipment in the game.

Bowling Game 3D is a simple and offline bowling game that can be played with your friends. You can select from three different modes Single player, Pass n Play and Vs CPU. This game has different design balls and all of them are unlocked to use.

In Single player, you can play and practice alone to improve your shooting skills for the game. This game also allows it to be played among your friends and groups in Pass n Play to compete with each other. In this mode, players play their turn and then pass the device to others for playing. You can add up to 4 players in this game.

In the last mode, i.e Vs CPU you can play matches with a computer and test your skill in real matches. The graphics of the game is really good and smoother than the above game. To throw the ball you can swipe on the screen and control its movements by swiping your finger to the desired direction after you shoot the ball. 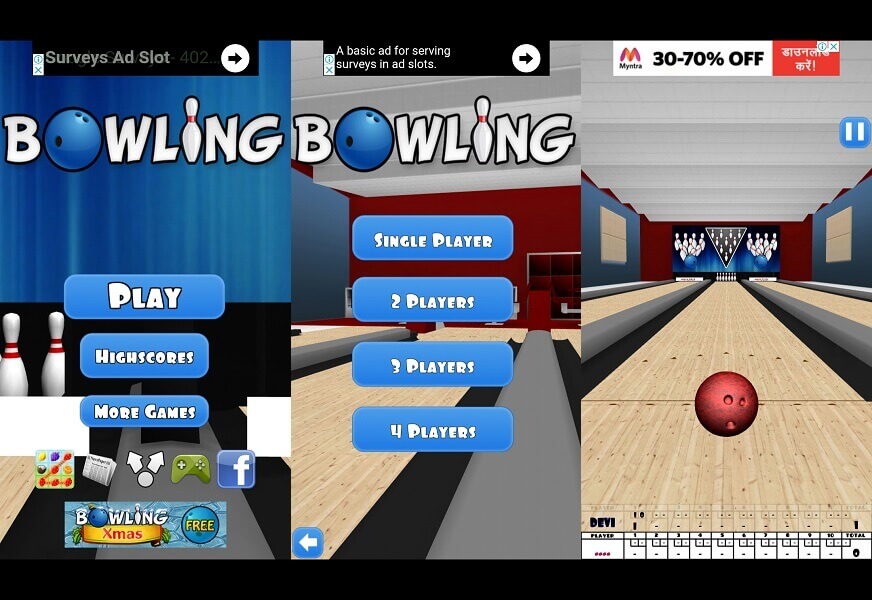 Another 3D bowling game that you can play with your friends just like the Bowling Game 3D FREE. This is one of the simplest game among the list of best bowling games for Android.

You can play a Single player match to improve your throw or add up to 4 players to play a match. This is exactly the same as the Pass n Play mode from the above game. The only difference this game has is the control of the ball.

The way to throw the ball is the same, swipe on the screen, but it does not have any option to control the movement after it. You can drag the ball left or right before the throw. Be careful while throwing the ball, as a little bit of wrong swipe might end up your ball in the wrong direction without hitting even a single pin. 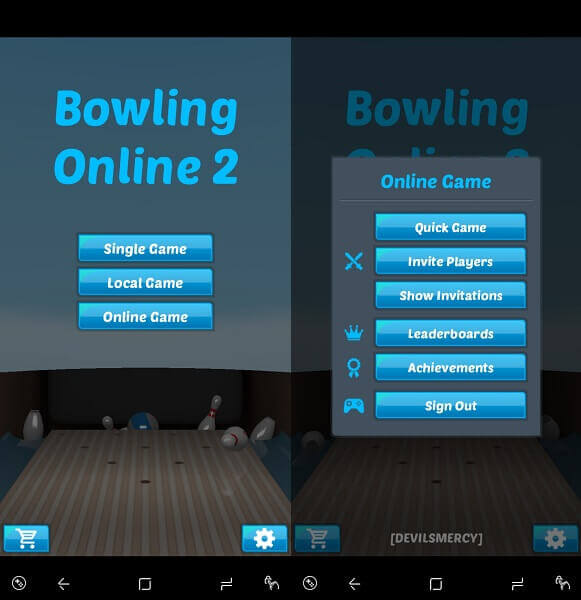 This game has decent graphics and some pretty amazing way to throw the balls. You can use different swiping actions to spin the ball and hit some great strike in one shot.

It has 3 modes of games to play from. Single player allows practicing shooting skills and improving your game. You can play this game offline with your friends or groups in Local Game. It can add up to 6 players in a single Local match.

You can also play an Online game with players from around the world. It allows sending invitations to other players and receives it from them as well. Compete with them and try to be on the top of the leaderboard. 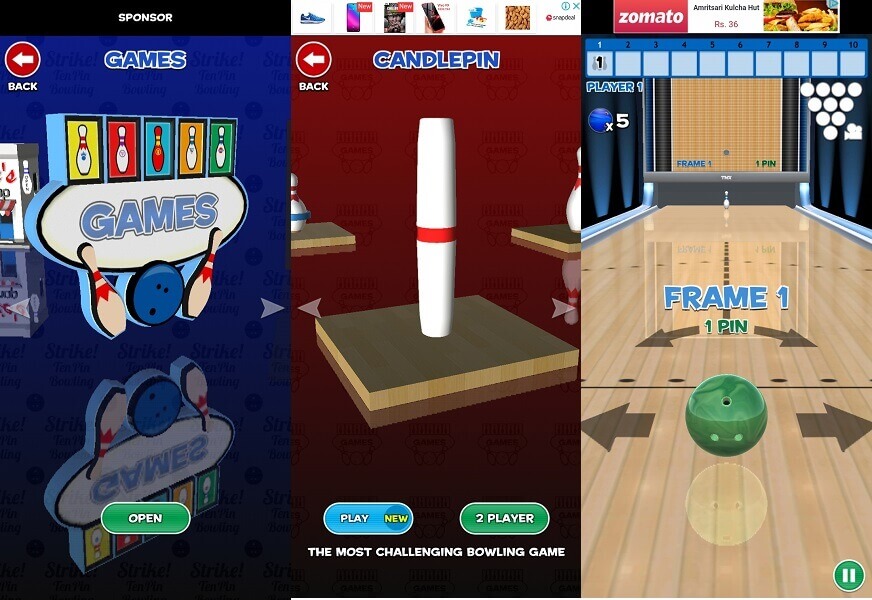 Unlike others, this game is a little different as it has a variety of modes to play from. It not only allows to play the regular bowling game but bowling game with a different aim and pin styles.

You can play a Single game with 10 frames or Series with 3 professional games. This game also has different pin styles you can play like, Candlepin, Duckpin or a Rubberband Duckpin.

Not only this you can also play mini-games with different aims like Taster, Spares, Splits, Kingpin and Mega lane. In these, you can show your skills and mastery of the bowling ball and complete the tasks given to earn rewards and credits. 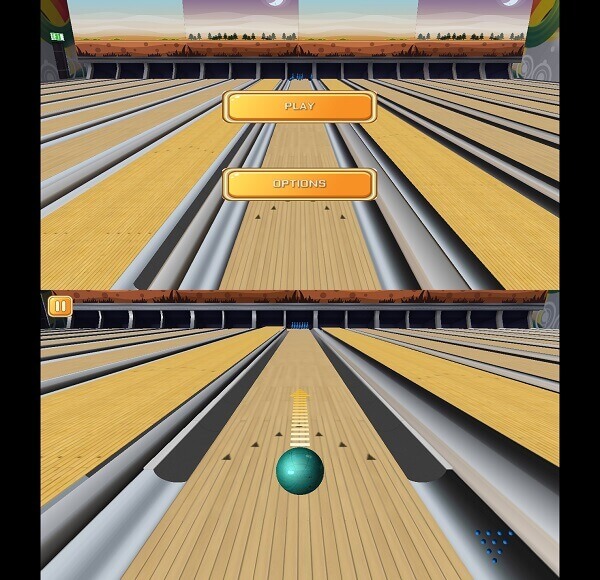 As the name suggests, this is the simplest bowling game with minimum options to play. You can have a single player game, 2 players game or a match with the AI. This options can be selected by tapping the player 2 option and selecting the desired opponent you would like to play with.

The graphics of the games are also simple and can be changed according to your device. You can play this game in the same way most of the bowling game is played, by selecting the desired direction and swiping on the screen to throw the ball.

This game is the perfect alternative for Bowling Game 3D FREE as it has all the game modes and methods of playing similar to it. The only difference that it has is, much better and really like graphics compared to that game. Not only that it also has an option to customize the bowling alley. You can select different floor designs and the images on the display board above the pins.

Enjoy these bowling games with your friends and challenge them to see who is the boss of rolling the pin-down.