Basketball is among the most played sports after football and cricket. This amazing game has already attracted most of the people around the globe. Not only that, but basketball also has its place on the list of smartphones games. Though the games may or may not be similar to the real one, they definitely are fun and challenging to play. You can hit some great style baskets, dunks and compete with your rivals to beat their score. To get that fun on your phone, we have listed some of the best basketball games for Android that you can play right now. 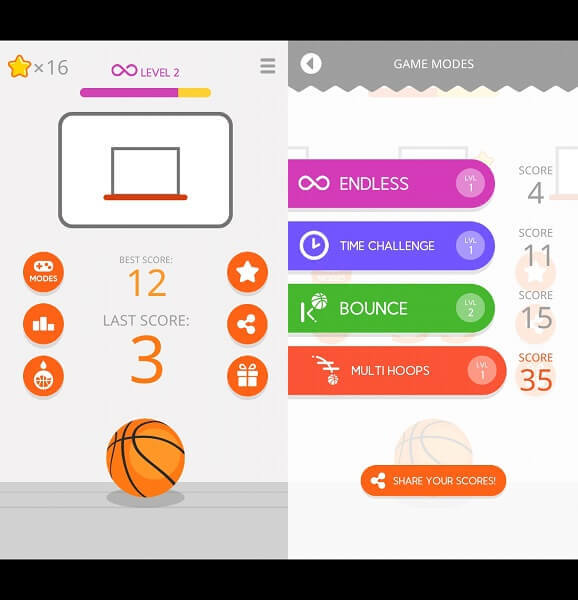 The first Android app in the list is Ketchapp Basketball. The game is very simple to play yet hard to master. Your goal in the game is to hit as much basket as you can by swiping the ball into the basket with your fingers. This game has 4 modes to play from:- Endless, Time Challenge, Bounce, and Multi Hoops.

In Endless you have to shoot the ball in the basket without missing a single shot. You will have unlimited time and balls, just shoot and score. Time challenge will allow you to shoot as many balls as you can in a limited time.

At last, comes Multi Hoops where you will get more than one basket that will keep moving on the screen. To score points you have to shoot the ball in such a way that it goes from more than one basket in a single shot. You can unlock new balls and basket boards as you keep scoring and reaching new levels. 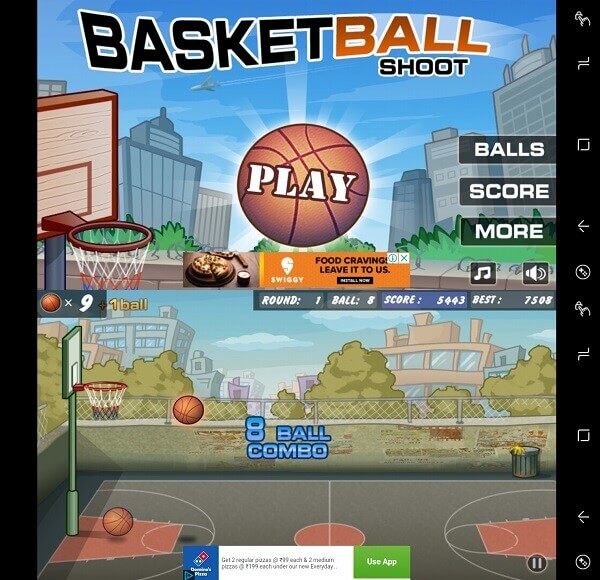 Basketball Shoot is an easy yet addictive basketball game for Android like the Ketchapp Basketball but with better graphics. You have to swipe your finger on the screen in order to make the perfect angle to shoot the ball into the basket. There are no players or opponent to compete with, only a ball and a basket. Score as much as you can and progress to a higher level without missing a shot.

One thing you have to take care of, there are limited numbers of balls that you will get so you have to make each of your shoot worth it. You will get one additional ball for each shot that lands in the basket. Hit shots without missing a single ball to score more from the combos.

Apart from that, you can have a different kind of basketball but first, you will have to unlock them. To unlock new basketballs finish the mission which will have different tasks for you to complete in the game. 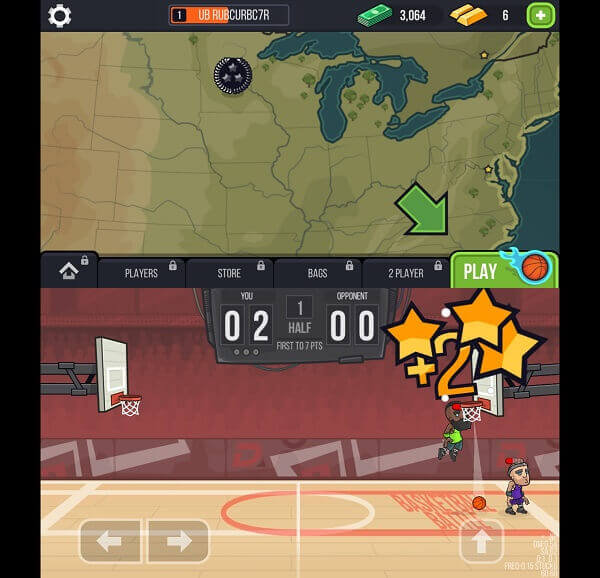 Battle in an arcade-style basketball game and beat your rival before he does. This game doesn’t have great graphics but is really fun to play. You will face your rival and it would be one on one battle in a full court where you can show you shooting and dribbling skills. The aim of the game is to score points to win the match before the other player does.

Your team will have two players, but only one player can play at a time. It also allows customizations of player and their accessories. The controls are simple, on the left side you get the arrows for moving the player back and front while on the right there will be an arrow for shooting the ball.

Complete all stages on the map and earn rewards and praises for your team. You can also invite your friend and play this game in a split screen mode. This mode works great on devices with large screens. 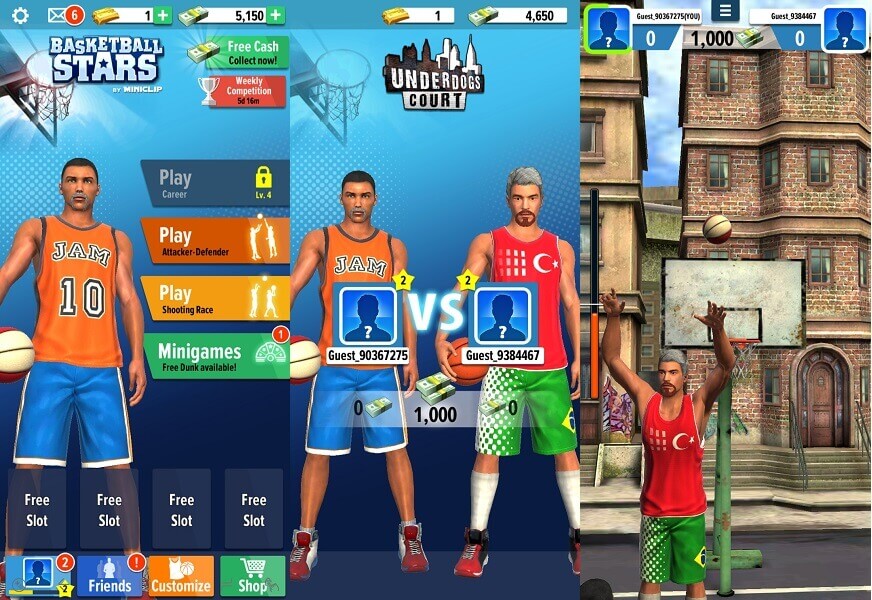 Basketball Stars is an online multiplayer game with some really great 3D graphics. In this game, you will be playing one on one with different players online. Your aim in the game is to score more than your opponent within the given time.

Winner of each mode will get prize money and you can also play for a higher amount in each mode. You can customize the player according to your desire with different looks, dress, and accessory. In addition to this, it also has a Career mode where you can finish each level and score more points in the game. You can also practice offline and improve your shooting skills. 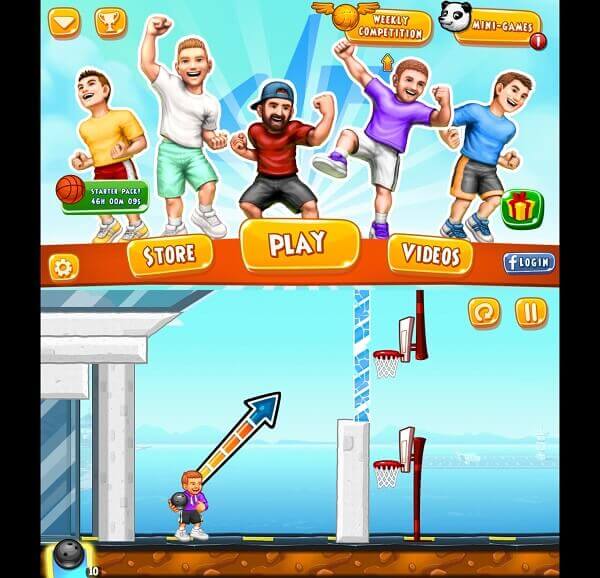 While all the basketball game focuses on scoring and defeating the opponent, Dude Perfect is completely the opposite. In this game, you have to shoot the ball in the basket with different tricks. The basket will not be easy to reach and there will be limited numbers of shots.

You will have to think and make perfect angles and different methods to make your ball go into the basket. With different characters and powerups to unlock from, you will enjoy using your mind to make these tricky shots. You can also use a different kind of balls like bowling balls, etc to break through those hurdles that can stop you.

This game has more than 100 levels and each will be tougher than the earlier one. You can also use power-ups to clear the levels that may seem difficult to pass. 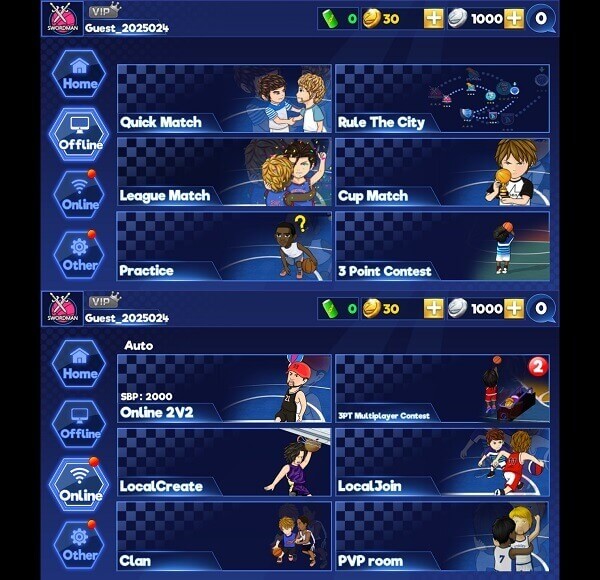 Street Basketball Association is the Clash of Clans of basketball games. You can make your own team, create or recruit players and battle with different teams and clans online. Clans here are the groups of different teams created by several users in the game.

This game can be played both offline and online with different modes to play in each. It is really a nice game with superb animations and graphics. In offline mode, you can play a Quick match, League match, 3 point contest or practice to improve your skills and much more.

While on the other hand in online mode you can have either a 2vs2 or 3vs3 match. You can also join local basketball teams created in this game or play a friendly match with your friend via local Wi-Fi. Apart from that, you can set the difficulty from easy, normal and hard according to your choice. It can also record your game which you can share it with your friends.

Stickman Basketball is a game similar to Street Basketball Association but with stickmen and fewer game modes. This game has more than 30 teams and variety of basket courts & balls to play from. You will have to clear levels in order to unlock them. It might look like a simple game, but believe me, it really is an awesome game.

You can have a quick match or play different Seasons and Cups. It allows selecting the difficulty, time of game and mode of running before the match starts. This game can be played offline but all the modes may not work.

Just like the above game, this also records your play and you can watch it anytime in the game or share it with your friends. Apart from that, you can also unlock different dunks actions which can be used in the game while playing. 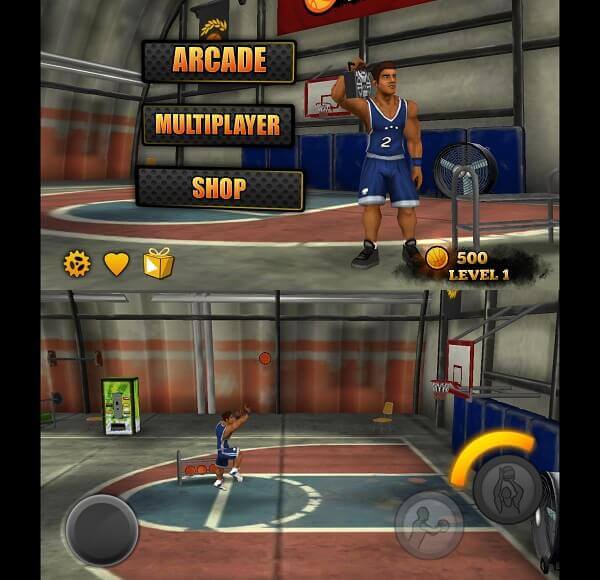 Play basketball by showing your dunking skills and competing with your rival team to defeat them. The best arcade style basketball game for Android with good animation and graphics. The matches will be played between the team with 2 players in each team.

This game has two modes to play from, Arcade and Multiplayer. In Arcade you can have a match with different teams from around the world, play with your friends via Hotspot or practice to make your dunk style more attractive. While in Multiplayer, you can play matches with players from Google Play.

In addition to that, unlock different dunk shots and use them in your game to show off your skills. You can also unlock shoes and different accessories which can increase your level of playing in the game. Earn coins and use them to purchase different teams and improving skills for your players. 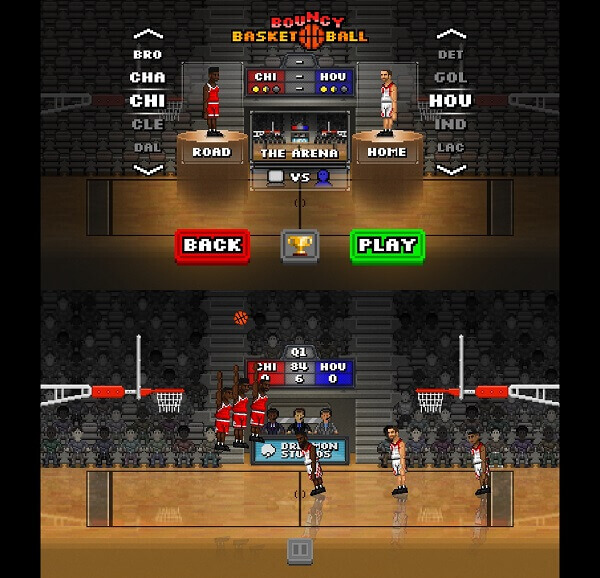 One of the simplest and fun to play the basketball game for Android in arcade style. This game is based on a pixel animation and the goal is just like any other basketball game, score the required points before the rival team to win.

You can select from various teams and customize the player’s dress and appearances. The controls of the game are simple, just tap and the player will jump, shoot and defend accordingly. You can play a match with the computer or with your friends on the same device. Both the player will have controls at each end of the screen. It may not be as good as other games, but it can be played anytime with anyone on the same device. 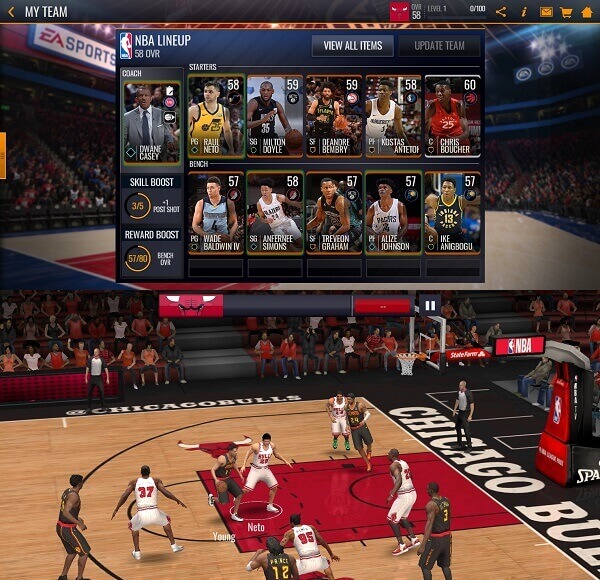 NBA Live is a 3D basketball game which is the best among all of the game in this list. You can play with real teams like The Bulls, Lakers etc and real players like Kevin Garnett, Stephen Curry, and many others. The game will provide you with tutorials on how to use the controls and play the game so you won’t find it difficult to figure it out yourself.

You can play campaigns to increase your skill in the game or play one on one to earn some extra rewards. Apart from that, it also has different leagues and seasons from which you can play. It will also allow creating and managing your own team. You can buy the player with the money that you have won in the matches or by making in-app purchases.

In addition to this, you can also earn some credits and reputations for your player in NBA events. In this, there are matches and challenges that come up almost every day. The graphics of the game is really superb and hats off to EA Games for creating this NBA basketball game for Android.

Have a look at these best basketball games for Android with different gameplay and challenges to face. Most of the games can be played both offline and online except NBA live as it requires internet connections to play all of its modes and features. According to my opinion, Ketchapp Basketball is the best basketball games to play offline.