Have you ever wondered which are the most expensive apps present in both Android and iTunes market? What would be their content like? Or how much an app can cost? Brace yourself because trust me, you are about to be shocked.

Apps With The Most Ridiculous Price 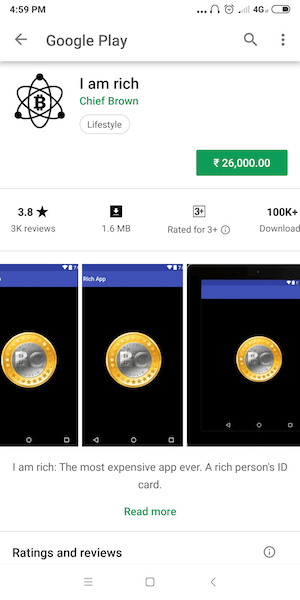 The reason I have mentioned ridiculous in the main heading is mainly that of this app. Pricing of this app is 26K INR in the Play Store. I thought, it better does something for this kind of deal. But no, it does nothing. Even the description says that it does nothing. Basically it just a symbol for rich people to show off this app on their phone. And it has 100K + downloads which is far from what I have imagined. Thinking about career change right?

I Am Rich on Play Store 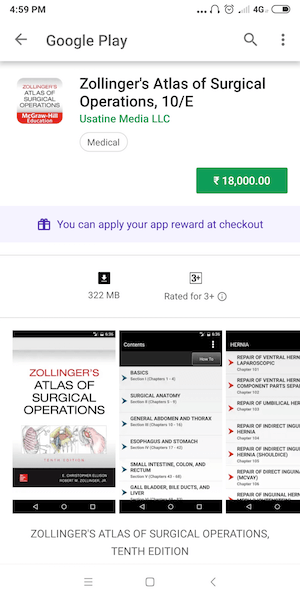 Unlike the app mentioned above, at least this one does something. This app will cost you 18000 INR. This app covers the guide and tutorials on how to perform surgeries in a safe way. It includes many surgical procedures like hernia repair, vascular access, breast procedures, sentinel lymph node biopsy, thyroidectomy, and many more like that. In the 10th edition of this app, 19 new surgical operations were included. Yay!

3. The Most Expensive Fidget Spinner 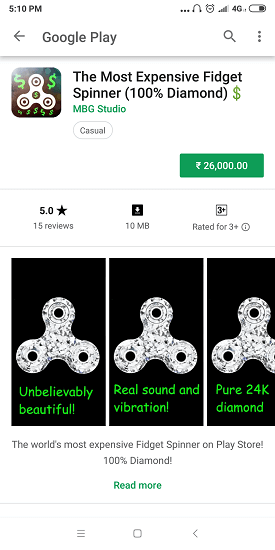 The Most Expensive Fidget Spinner 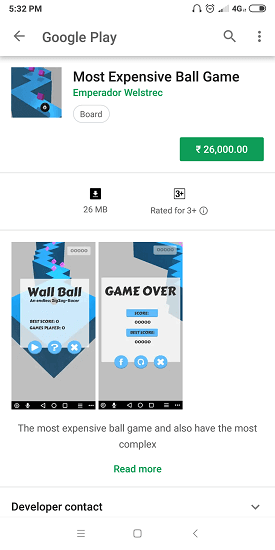 The best part about this app is that if you pay for this app, then you will be officially the first user to install this app. All the high scores will belong to you only. Isn’t it great? A terrible game for 26K INR making it the most expensive game on the Android Play Store. 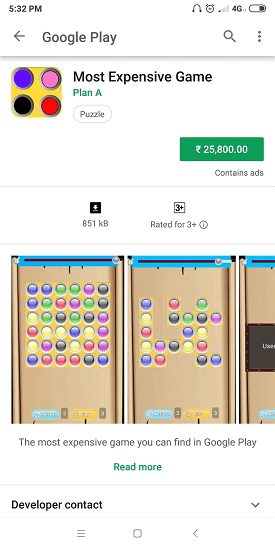 Another one. How many of these are here? It is a puzzle game which will cost you 25800 INR. It has 5+ downloads. Not sure who were those 5 rich people. Couldn’t they just play something like PUBG or Fortnite? Heck, they could have bought a whole Playing console at this price.

You thought Android was costly? The maximum limit for Android was 26k INR. This one costs 79,900 INR which makes it one of the most expensive apps in this list. But at least, this app has something to offer. It is a pro piano technician tuning app. The developers claim that it took over 3 years to develop this app with the help of master piano technicians all over the world. You need to have a basic understanding of the piano before downloading this app. I really can not comment on price worth and all, but it is definitely a good app for piano players.

App for 79,900 INR with such a small description. Makes you wonder if it is genuine or just a rip-off. Definitely more chances of the later one. Apparently, it a stylish cashier system for all purposes. And is also support printers. That’s it. Even the screenshots could not make anything clear about this app.

I was so happy to see at least a full description for this app. But still, I don’t trust this one for some reasons. First of all, this app has not been updated in ages. And what exactly such an expensive Lifestyle management app can offer? If you are an extremely rich person and have nothing better to spend money on, then this is for you mate.

Finally an app worth looking for. This app is for those people who have issues while using their natural voice. This issue can be anything like Autism, Down Syndrome, ALS, apraxia, or even stroke. It is a word power including vocabularies for easy communication especially designed by Nancy Inman. Although this app will take 1.3 GB of your storage. But can’t really nitpick anything about this app.

This one doesn’t compete with other apps in this list. It will cost you 3999 INR in the iTunes. Agro app is specifically designed for Agronomist. Didn’t even knew that this word exists. Basically, an Agronomist is a person who has a science background and is keen on using flora and fauna for better human benefits. It allows the agronomist to store client’s details, and their reporting and experiments. Description claims that it can help them to save up for 15 hours of work.

Most Expensive Apps That Will Leave You Shocked

These were the 10 most expensive apps for Android And iPhone. To be honest, donating money where it is needed would be best if you really have nothing else to spend on. Rest is your choice, have a diamond fidget spinner if you want. After all, it’s your hard earned money.