Most of these games can be played with either CPU or friends offline from the same device. Or you can play online games with other players rather than always facing the CPU. This way your game can be improved in a much better way while creating high scores to beat your opponents. So let’s check out the best air hockey games for Android. 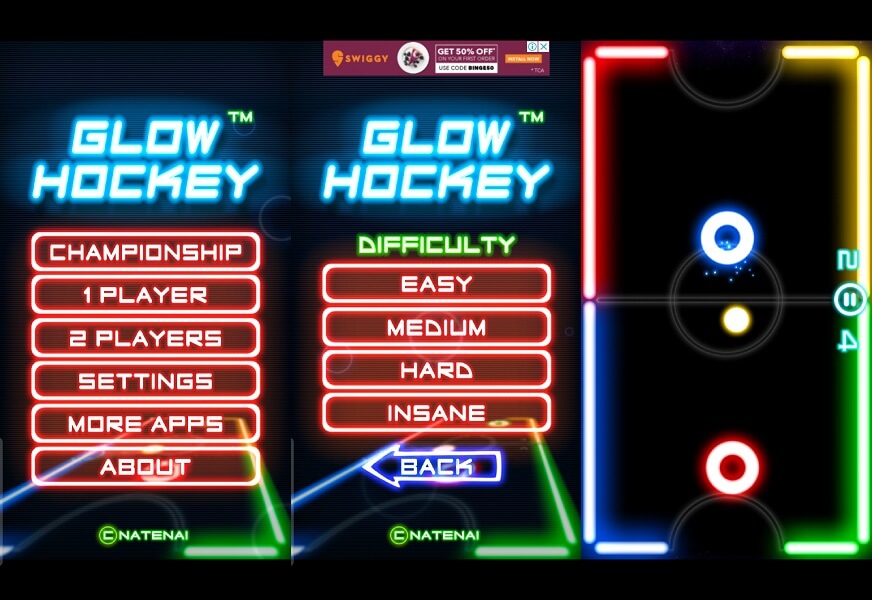 Your aim is to score more points than the opponent to win the matches. Here the player who scores 7 points wins. Apart from this, you can change the air hockey table designs, the color of paddles and pluck from the given. This game is really smooth while playing and you will definitely enjoy it. 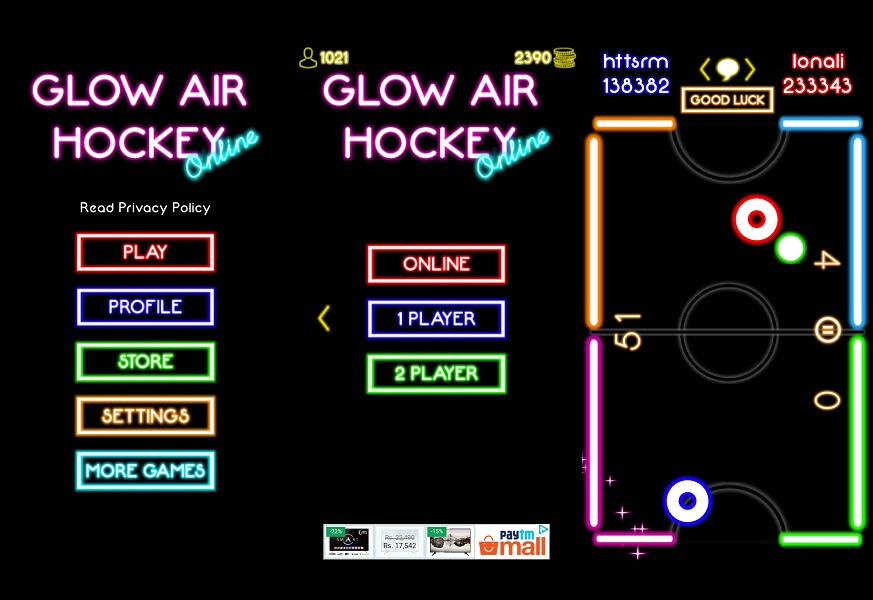 This game is based on the regular Glow Hockey game mentioned above. Here you can play online one-on-one matches with players from around the world. You need to register with your email id in order to play online games. It allows inviting your friends to play online matches if they are added to your email contacts.

Apart from that, you can play 1 player CPU matches or 2 player offline matches with a friend. The game is smooth and you won’t face much lag while playing. In addition to this, they also have special effects that you can turn on or off as per your choice. These effects can be seen while playing the games. 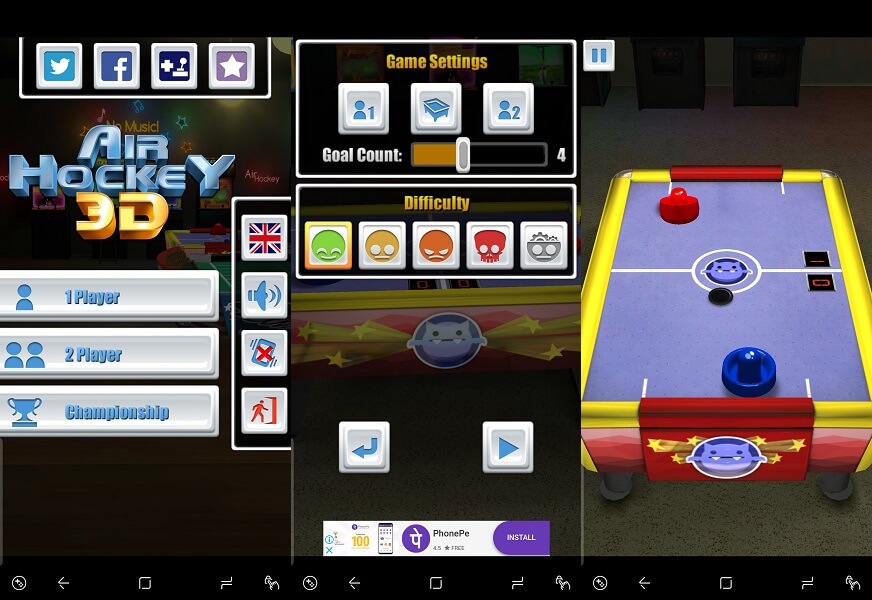 This is one of the best air hockey game apps for Android devices. The modes of playing in this game are similar to the Glow Hockey but, it differs a lot in the graphics and the details of the game. As it is a 3D game, you will get a real air hockey table like the ones in the game parlors. If you don’t feel like playing in the 3D mode then you can switch it to 2D in the menu after pausing the game.

You can select from 5 difficulty modes and set the goal count that has to be achieved for winning the matches. The maximum goal count that you can select is 9. It also allows changing the layout of the table and pads for the game. All these settings can be changed before a match starts as per your desire. You can share the progress of your game with your friends via multiple social media platforms. 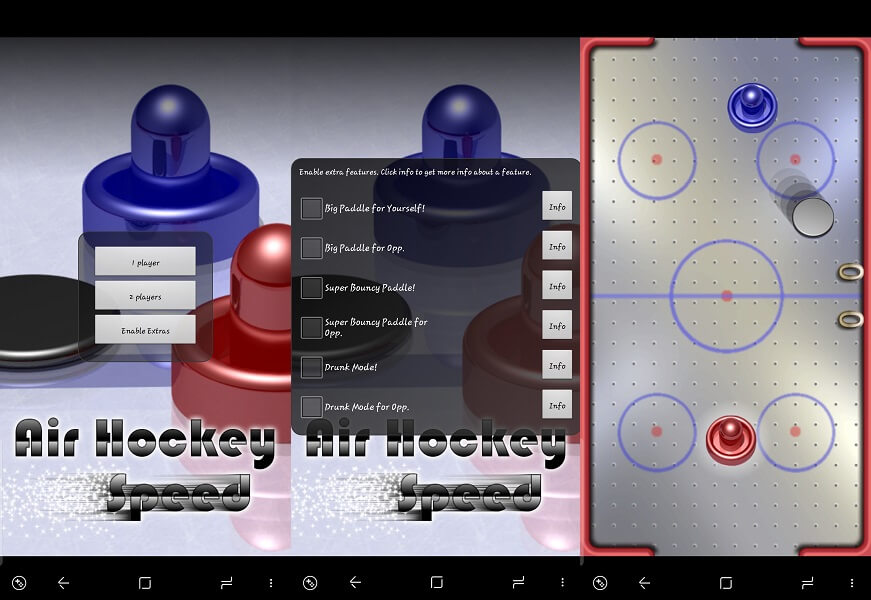 Yet another game that you can download for free and enjoy anytime you like. This game is little different than all the other games on the list because of the extra features that it provides. You can play 1 player matches with various levels to select from. Or have 2 player matches where you can set the goal limits as mentioned in the above game. You can play from the best of 1 till best of 17 matches each with different goal limit to win.

Now talking about the extra feature, you can enable features like big paddles, super bouncy paddles, and drunk mode. All these features can be enabled for both you and the opponent to bring a new twist while playing the game. And in addition, this game also has crowd sound in the background while playing which can be disabled if you wish to. 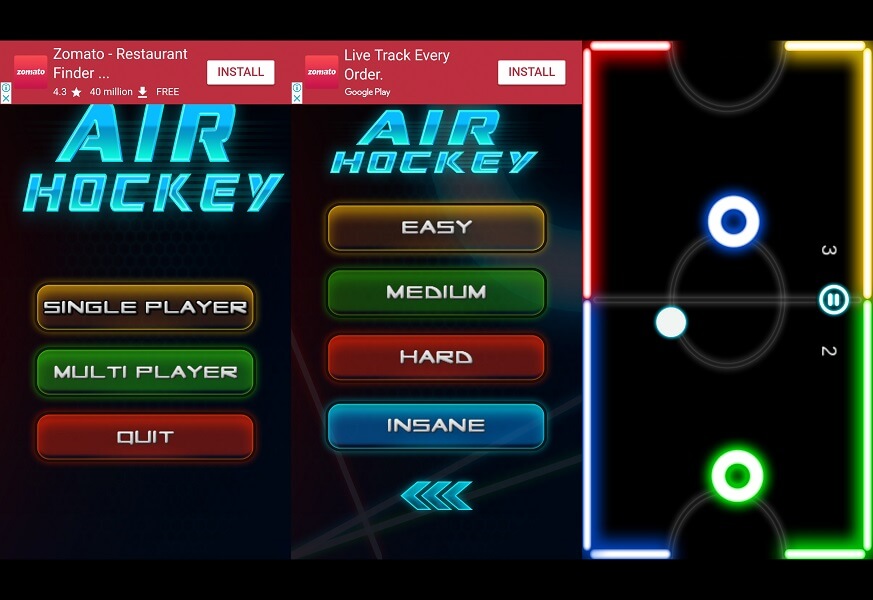 This game is the perfect alternative for the Glow Hockey game; the first game in this list. The gameplay, theme and the aim are also similar along with the point to score i.e 7. Rest, you can play single player mode with 4 difficulties or play a match with your friends on the same device in multiplayer mode without any lag. It has minimum options to select for playing the matches. 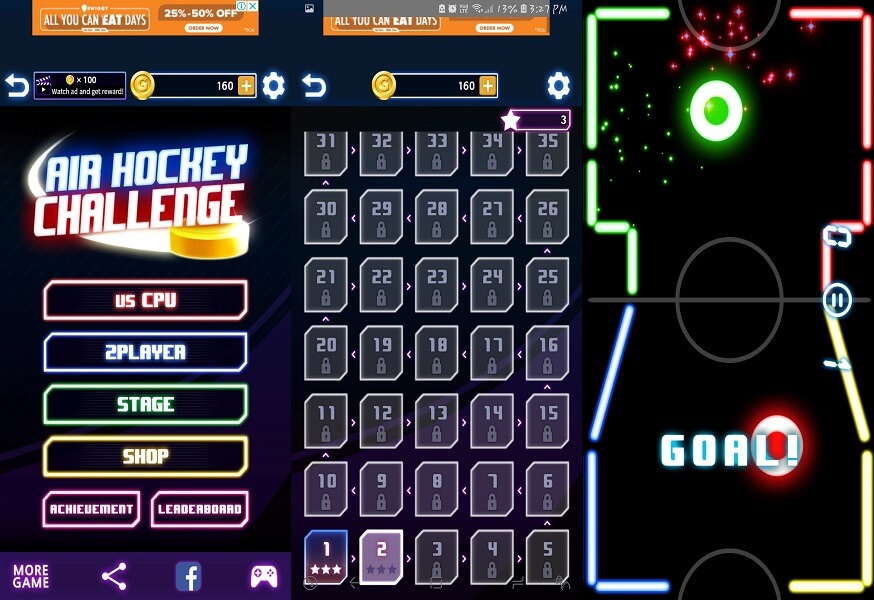 Unlike other hockey games with normal tables where you can play, this game will give you a whole new experience. Here you can play on multiple kinds of tables with different shapes increasing the difficulty and the levels of the game in stage mode. As you clear a level you will earn coins and move to the next one with a new kind of table layout. Apart from this, you can play vs CPU with various difficulties and 2 players with your friends.

Not only this, but you can also use 2 items to gain an advantage over the opponent. One item can block your goal so the rival cannot score and the other will make the opponents paddle smaller. After selecting these items, it will last only until you score a point; much different than the rest games. You can buy more of these items and the game tables with the coins that you have earned while progressing through the levels. 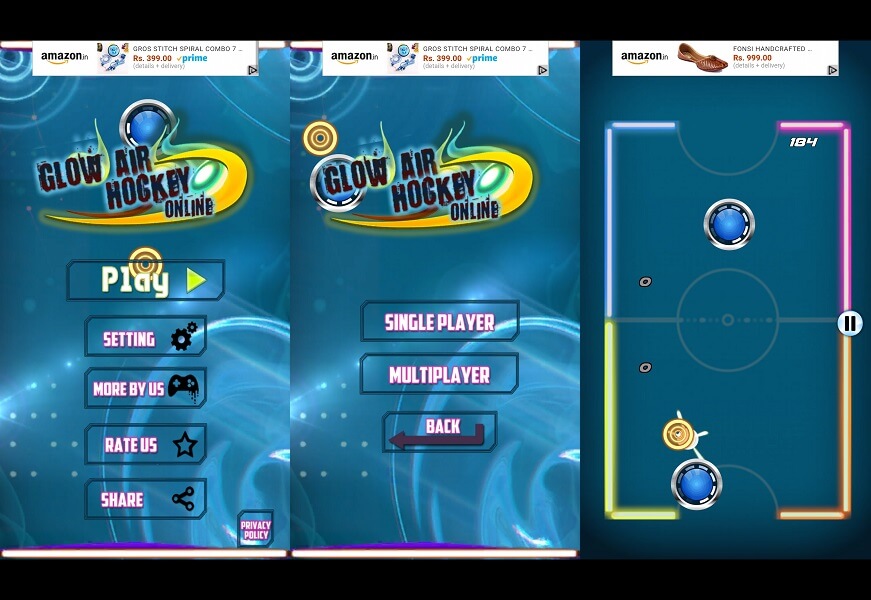 This online air hockey game for 2 players can be played between friends by creating a server through the internet. You can create a server or join one in multiplayer mode. The game will ask to enter the IP address provided in the screen in order to get connected to play. Talking about the gameplay, it is a little slow in speed but easy to play as compared to the other games. You can also play single player matches with three difficulties as per your choice. 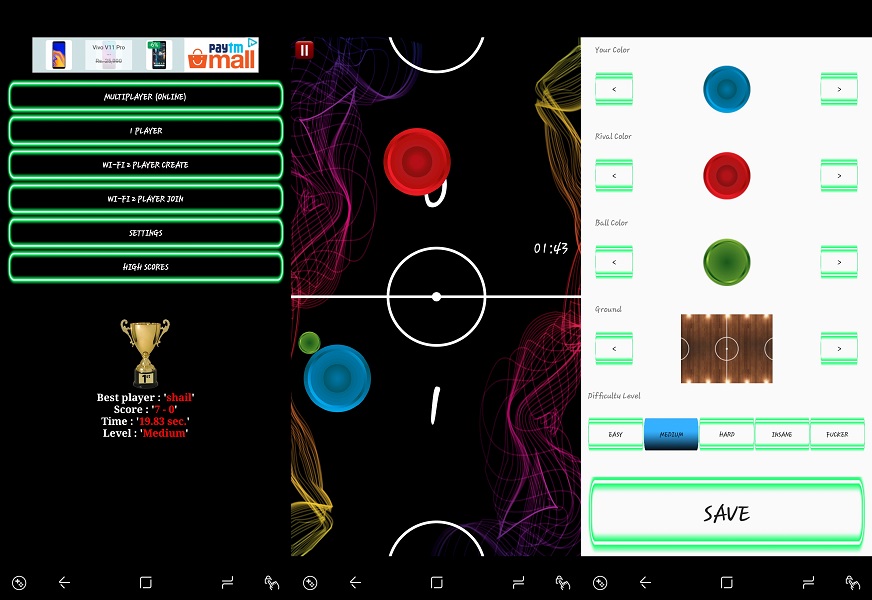 Air Hockey Wi-Fi is an online multiplayer game which can either be played with players from around the world. Or it can be played with friends by connecting via Wi-Fi. The interface of the game is very simple and it is easy to select from the given modes. Apart from this, you can customize the game table and the color of both the ball the hitting pad. It will also let you select the difficulty in the single player matches before starting the game. 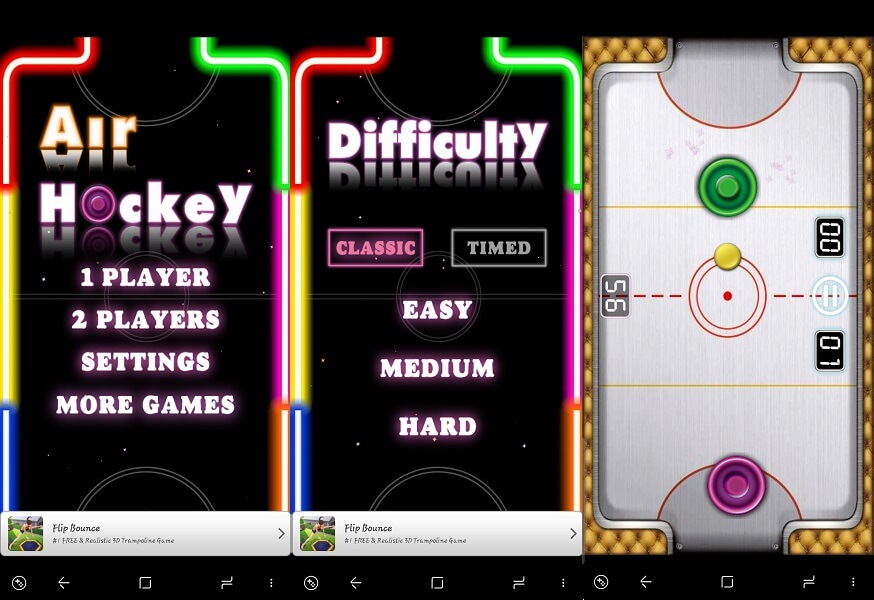 With the same aim like every game, Air Hockey Delux will provide you with two different modes to play with. Classic, where you have to score the given points before the rival or timed, where you have to score as much as you can in the given time. For both these modes, you can select from three given difficulties. Furthermore, you can play 2 player matches and change the background of the game and the color of the puck(ball) and mallets(paddles). 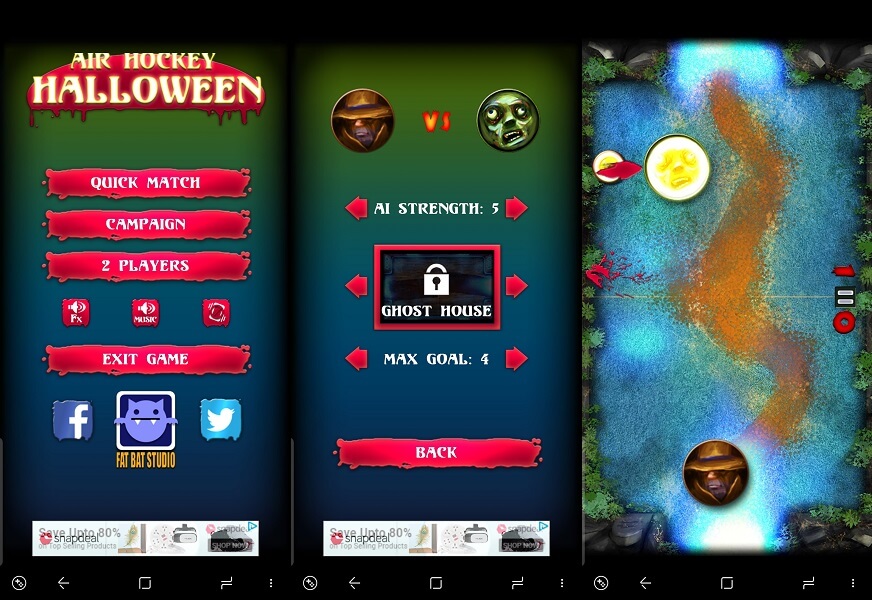 The last game in the list is from the developers of Air Hockey 3D. It is a regular game, but to make it more interesting they have added a Halloween theme to it. You can play quick matches with the AI or campaign by defeating various opponents like a zombie, skeleton, werewolf and many more. In quick matches, you can select the strength of the AI, number of goals to win, and the field.

The campaign will let you unlock new fields like the forest, ghost house, and mutant pit. As you keep defeating the opponents and progressing through various levels by earning stars. It also has 2 player modes to play with someone near you in a single device. Both of the game from the developers are different and provide a new layout to the normal game.

In this list, almost all the games are similar to play and are equally addictive. There are only a few differences among them like themes, modes, and the field or the table in which the game is played. Though there are both online and offline air hockey games mentioned, but offline ones are more popular. If you are fed up of playing with the computer then you can go for the online ones.