Star Wars is one of the oldest and most successful Sci-Fi movie franchise. It not only has a great story but also characters that people are fond of. Even the villain Darth Vader has a pretty good fan following. There are games for Star Wars that you can only play on your PC and PlayStations. But, what if you can play Star Wars based games on your Android devices? 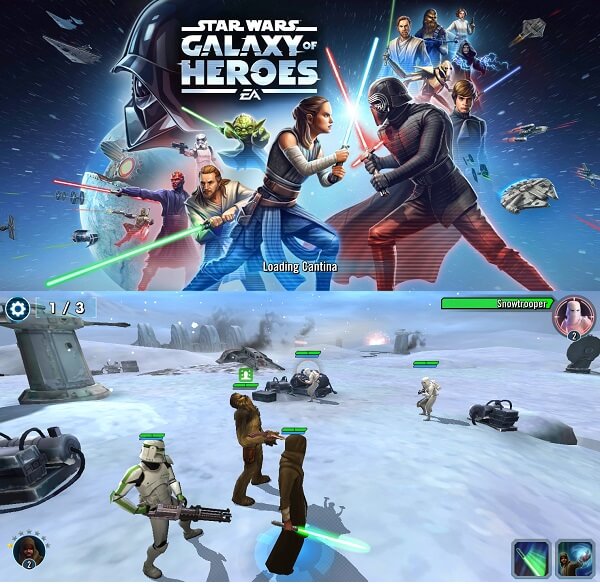 This Star Wars game will let you create squads and teams with almost all the characters available form the Star Wars era. Not only this, but it also has characters from new Star Wars franchise like Solo: A Star Wars Story, The Last Jedi and a few more.

Have a war between the dark and light side to see who dominates the Galaxy. Here you will get to build your team and train them to prepare for battle. You can also use the special powers of the characters if they have it. The graphics, details, and info provided in the game are really great. But it could have had a better gameplay. In the game, you have to tap on the character which you want to use and it will attack by itself. 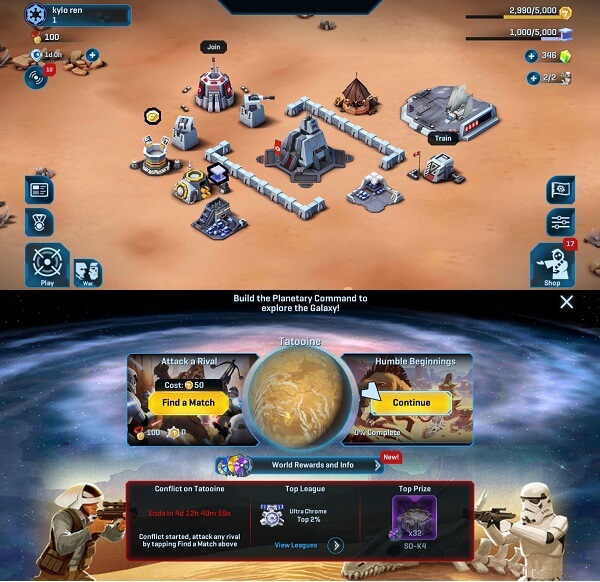 This game is as amazing as the movies itself and one of the best Star Wars games. After the destruction of the Death Star, the Galactic war is on fire among The Empire and The Rebellion. It is a strategy based game where you have to command and build your clan, buildings, weapons just like in the Clash of Clans. You have to plan your base which will defend the enemy attack and stop them from destroying the resources.

Once your base is set in the game, you will get in touch with characters like Princess Lea, Darth Vader, Han Solo etc. And you will have to choose to whom you are going to swear your alliance to. The alliance will let you grow and provide resources in return of your faithfulness either to the dark or the light side. This game allows upgrading your base, troops, and weapons to become stronger. You will also get the opportunity to attack other clans online to get more resources for your buildings and troops. 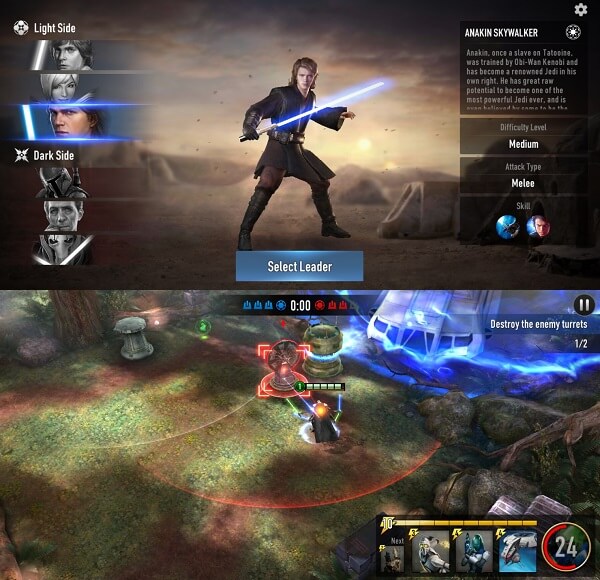 With this game, you can lead either the light side or the dark side and battle against your enemy. You will get to choose from Luke Skywalker, General Grievous, Anakin Skywalker, and some other characters. The game has modes where you will have 1vs1 arena matches. Here you can deploy various cards which will provide troops, soldiers and air support by strategizing the enemies attack.

You will earn rewards and ranks for matches you win. There will be new characters and weapons and troops in the reward which you can use later in the game. Apart from this, you can also play Arcade and Single player matches. This game also has characters from the Star Wars: The last Jedi like Kylo Ren and Ray which you will get later as you progress in the game to higher levels. 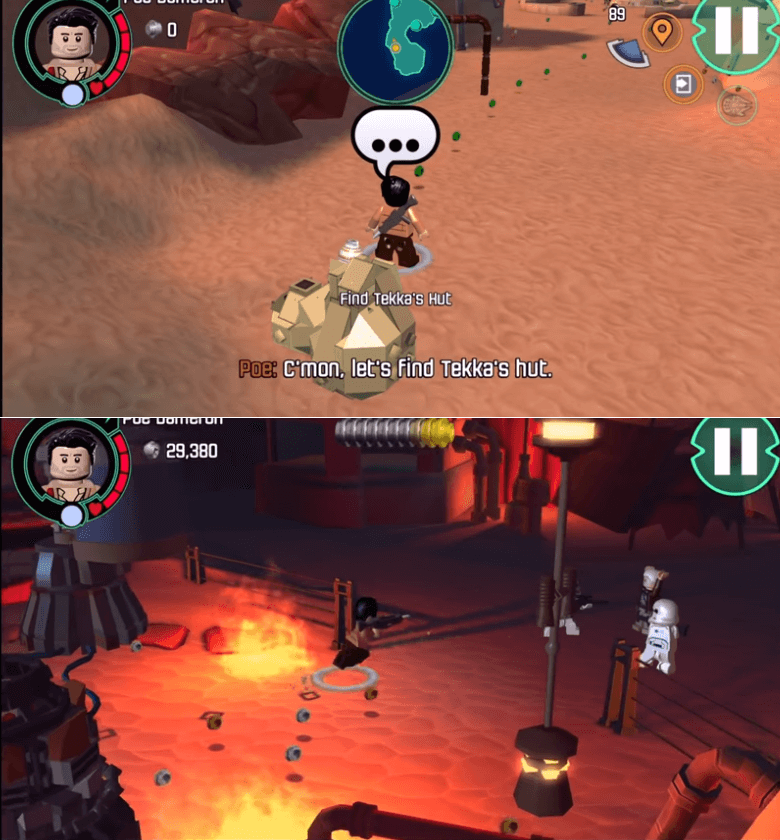 You all might have seen the cool LEGO Star Wars movies, now you can play the same in your Android Smartphones. The story is based on the LEGO Star Wars: The Force Awakens. You will get to play from chapters starting from the planet Jakku, where you have to help Poe Dameron, a brave pilot of the Resistance army. He is on the lookout with this bot BB-8 for the ally who knows the whereabouts of Luke Skywalker, the last Jedi.

This is a third person based game with great graphics and response. You have to explore different locations, complete given tasks and solve puzzles to progress along with the game. Not only this, but you can also play as other characters like Kylo Ren, Ray, Finn, Han Solo and many more. Lead the resistance to defeat the First order who has risen with the destruction of the Empire and won’t stop until the last Jedi is killed. 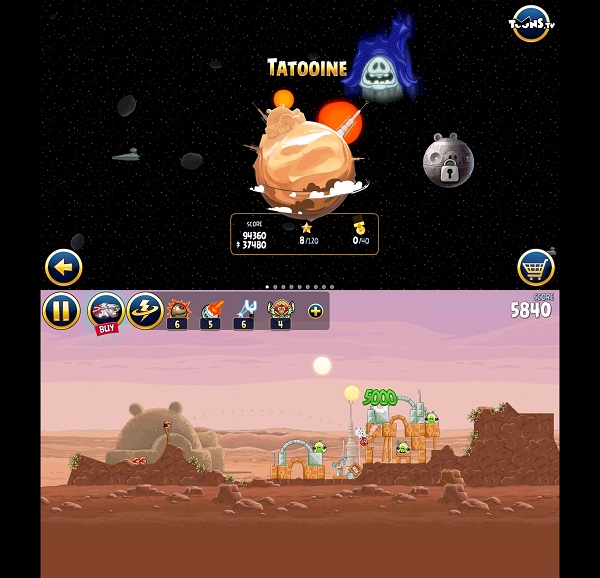 Now you can shoot Angry Birds in your favorite Star Wars style. Everything will be the same as every Angry Birds game but with Star Wars theme. Red as Luke Skywalker, Chuck as Han Solo and many other birds representing the Star Wars characters. The Darkside here are the pigs as the Strom Troopers and Darth Vader.

You have to destroy The Empire ultimate weapon the Pig Star and defeat all the pigs. There are various levels to play in the vast galaxy. It has special abilities for special characters as in the Star Wars movies. The levels of the birds and their skills will also increase as you progress in the game. You can also use powerups to enhance your game and clear the difficult levels. 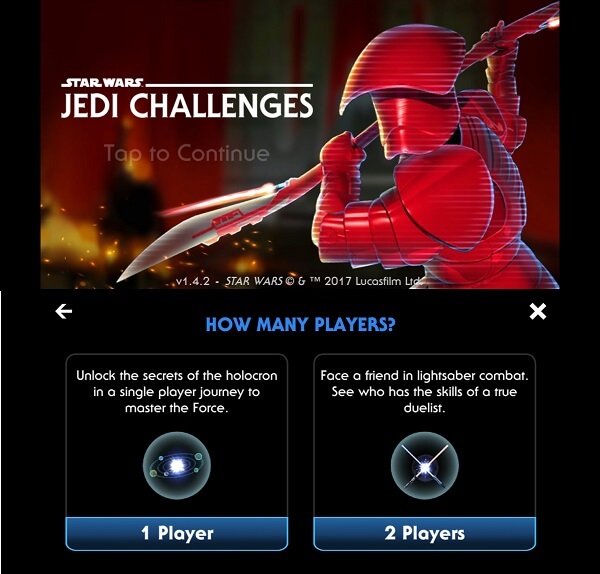 This game is for those who want to have the next level of Star Wars gaming experience. You will require three additional hardware, a Bluetooth remote for a lightsaber, VR headset and small Beacon which will work as a Holocron. Without these, you can not play this game. It can be purchased via their website provided in the game.

It is an AR (Augmented Reality) based game. Here with help of all those accessories, you can play as in real life. This game has two modes, where you can play a 1 Player match and explore the galaxy to master the Force. Or you can have a 2 Player match and battle against friends to see who has a more strong connection with the Force or the Dark side. 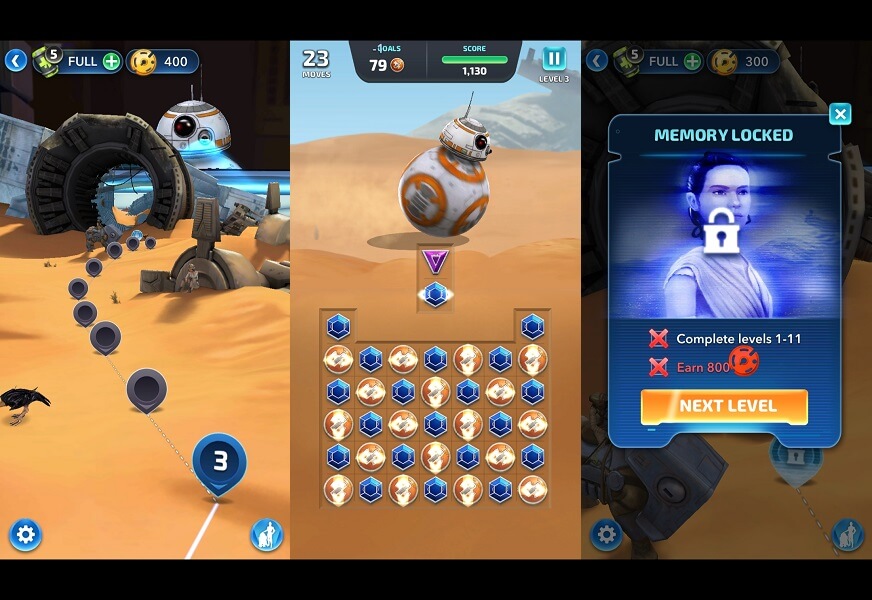 Witness the journey of BB-8 and his memories in Star Wars: Puzzle Droids. This game is based on the story of Star Wars: The Force Awakens and A New Hope. You will get to witness the adventure of the galaxy and solve puzzles to progress in the game. The game will show you some unforeseen moments and events that may not be in the movies.

Not only this, you will meet characters like Han Solo, Ray and many more in the adventure guiding you in the journey. You can solve puzzles and unlock BB-8s memories, repair his circuits and travel the galaxy alongside with R2D2. The game will progress as you clear the levels and get to know a new side of the Star Wars Saga.

These Star Wars games for Android will let you play different characters from the Star Wars era. You can help the heroes to beat the dark side and maintain peace in the galaxy. Some of the games on the list are really impressive and a must play. LEGO Star Wars, Star Wars Jedi Challenge and Star Wars: Commander are the best games with superb graphics, storyline, and gameplay in this list. If you want to play something different then you can go for Angry Birds: Star Wars and Star Wars: Puzzle Droid. All the Star Wars mobile games are free to download and play.