Whether you call it football or soccer, the popularity of the game is the same across the globe. There is no one who doesn’t love to play or see a football match. Football is the best game that you can play, not only in real life but also in PC and smartphones.

Earlier only PC and PlayStations used to have football games. But due to an increase in smartphone gaming, these football games are available for both Android and iOS devices also. Some of them can be played offline and online through various modes. So without any further wait, let’s have a look at the best football games that you can download and play on your smartphones. 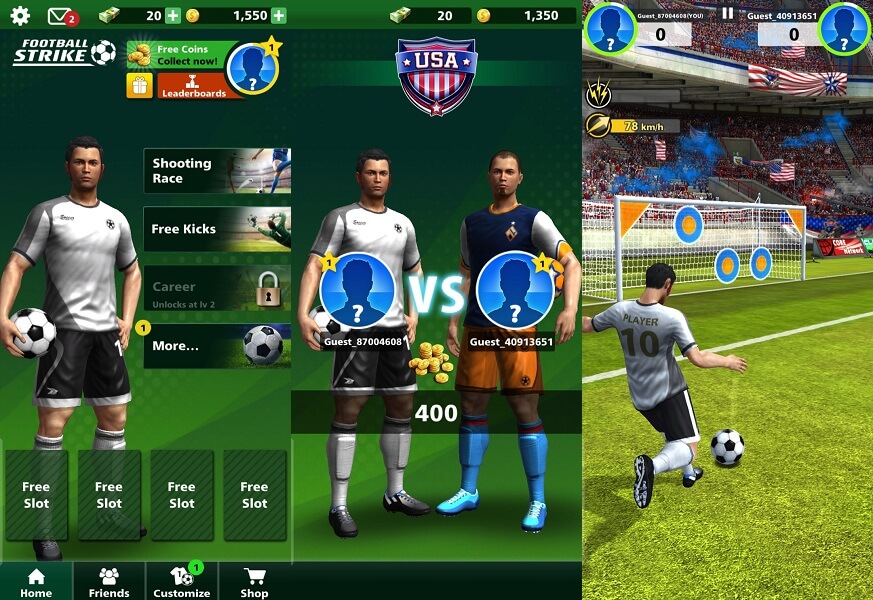 Football Strike is an online multiplayer game where you can play with various opponents across the globe. In the game, your aim is to shoot as many goals as you can within the given time. The player with the higher goals wins. You can earn more points by hitting the targets that appear inside the goal post. It has three modes to play from. Shooting race, Free kicks, and Career. You not only have to shoot, but also defend your goals by goalkeeping. Win matches to increase your level in the game. Apart from this, you can also invite your friends to play a match with you online. 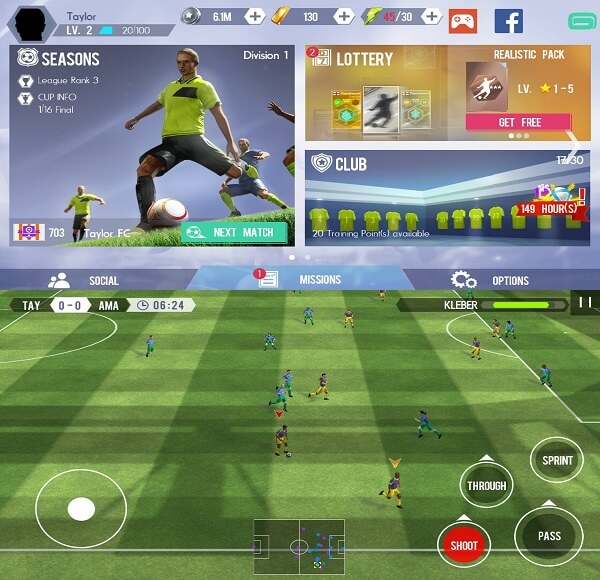 It allows playing friendly, online and tournament matches. Hit as many goals as you can to defeat the opponent by dribbling the ball and reaching to their goalpost. The graphics of this game are decent and there are on-screen controls with which you control and shoot. Developers could have improved the pace of the game, but in this size, I think it is fine and you will definitely enjoy it. 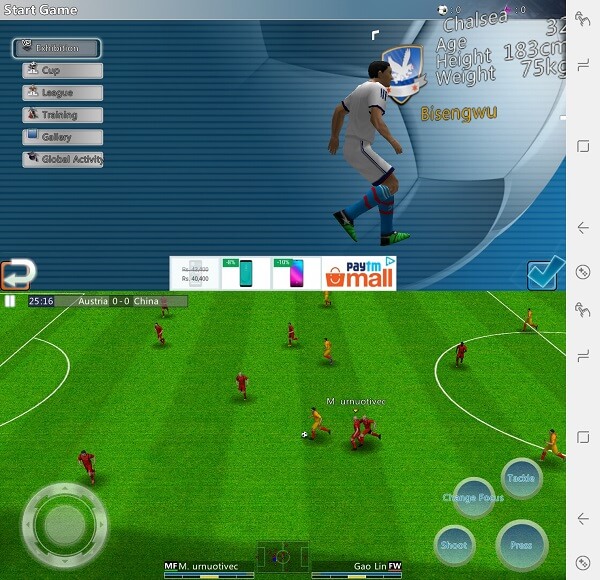 Just like the above game, play football matches and defeat your opponent to reach to the top. Here you can play an Exhibition, CUP, League matches or complete the training to improve your game. There are teams from around the world and various leagues, for e.g. English league, which you can select to play from.

The gameplay and controls are similar to the above game, but the response time and speed are much better. Apart from this, you can customize some of the game aspects like difficulty, rules, match time and weather as per your choice for any game that you play. 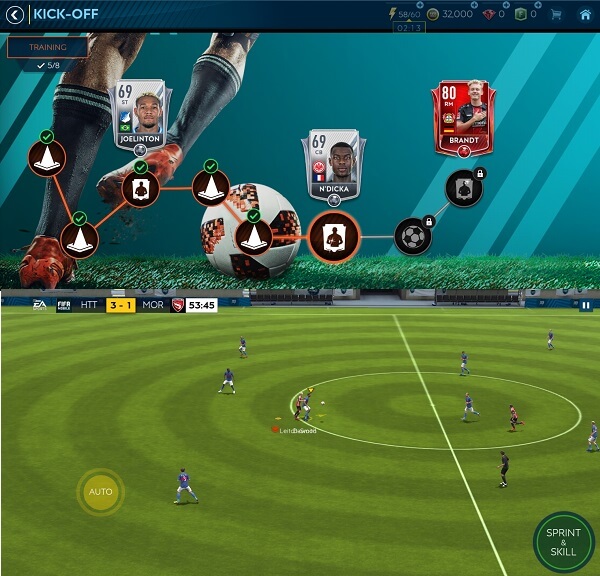 This game is developed by EA sports and they make some really great games for various platforms. Here Neymar Jr will guide you through the game, and provide training to become the best player and make your own team. With each completed training, you will earn new players for your team. There are players with real name and profiles that you can select from. You can play online team matches with players from around the world in this game.

Coming to the gameplay, this game has much better graphics and response as compared to other games mentioned above. The controls of this game are also different. In spite of the onscreen controls, you can pass the ball by tapping on your own desired team player and swipe as per the directions to hit a shot. Win all the matches and select new players to increase your team’s rankings. We must say that it is one of the best football games you can find on Android and iPhone. 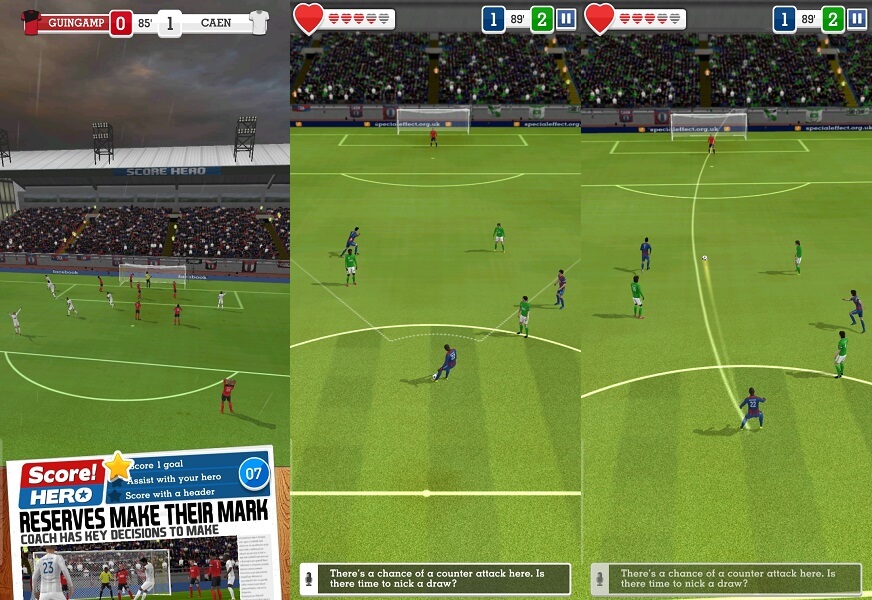 Play football in a little different way than the rest of the games above. You have to play and surpass each and every stage in order to increase your level in the game. Each level will have an objective that you have to complete to progress to the next season.

There will be training for you to get hands-on how to play the matches. Unlike other games, where your aim is to pass the ball to your team player and reach towards the opponent goal post. Here, you only have to swipe and pass the ball without dribbling in such a way that it ends up to your teammates, not the rivals.

In case the ball gets to the rival team player then you will have to play that level again from the starting. The graphics are superb and it doesn’t lag at any point of the game. There is only one thing, you have to get used to this method to become perfect at this game. 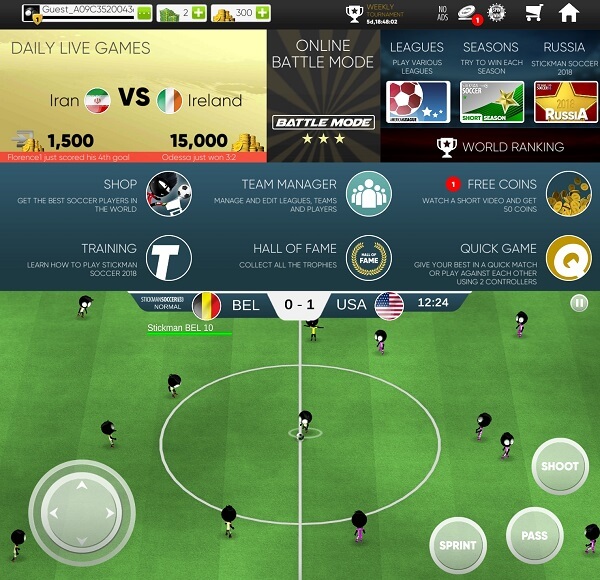 What could be a better combination of games other than the stickman games and the football? Due to the different kind of theme that you can enjoy here makes it one of the best football games for both Android and iPhone. You can play a regular football match between countries of your choice or teams from various leagues, seasons and even online matches.

The graphics of this game are fine and the gameplay is smooth. You can also play this game as a manager of the team. There are penalties, red cards, injuries and customization option for teams like every other normal football games. I agree that it is not a typical football game, still, it is really amazing and fun at the same time. 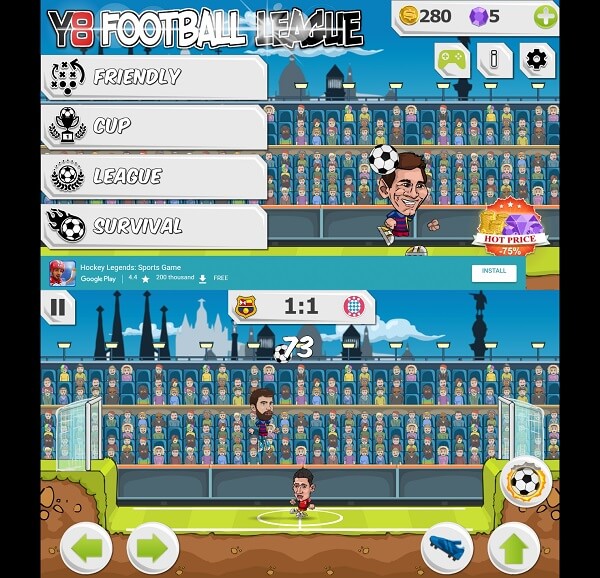 Yet another football game that you can download for free. This is a one-vs-one player football match where you have to score more than your opponent. The characters in this game are funny and unusual than others. Unlike other games, here you will get a ground where the goal post is higher than the level where you will be playing.

There are on-screen controls which you can use to jump, shoot and move around. It allows changing the control set up from the settings menu after pausing the game. You can play friendly, cup, league and survival matches. Earn coins by defeating your opponents in these matches. These coins can be used to unlock new players and characters. 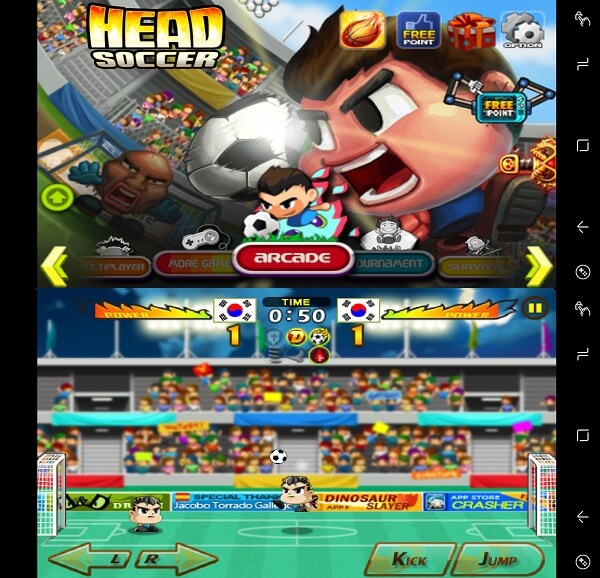 This game is somewhat similar to the above game as the one-vs-one gameplay and the playing controls are almost the same. The only place where it differs is the graphics and the layout of the field. Here the fields are normal and the goals are at the same level. There are various modes of game to play including the multiplayer option. You can select different teams and characters to play in the matches. To unlock these characters you can progress through the levels accordingly. 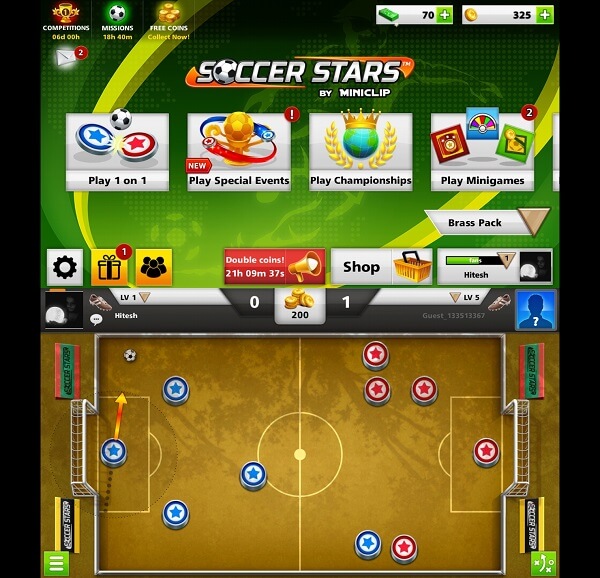 Among the list of best football games, this is yet another one with a different kind of gameplay. There are no characters in this game, you have to play using the round disks or pads just like in air hockey games. You have to aim and release the disk to hit the ball to move it towards the goal. To strategize, you have to see the placements of all the rival disks and make a shot without getting blocked by them and directly goes inside the goal. You can play one-on-one matches, special events, legend cups, championship or even online with friends. 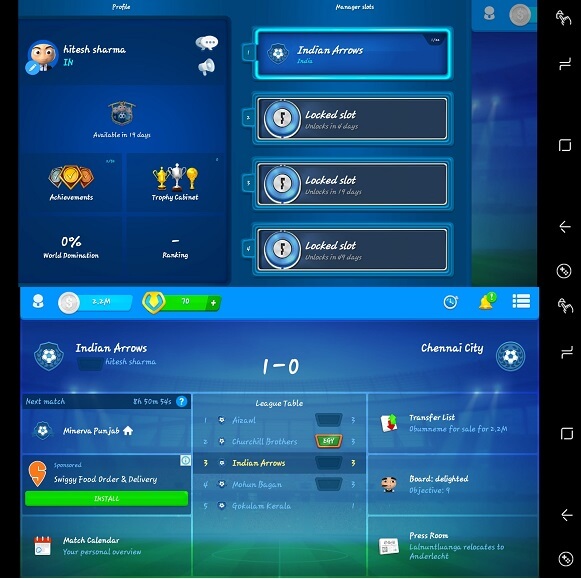 If you are looking for a game that allows managing a football team then this game is for you. This is among one of the best football manager games for iOS and Android. You can manage your own football club, by buying or selling players, train them and make decisions regarding the various aspects of the club.

Your team will have daily matches, and in the end, you will get to see how your skills in managing the team are. It is a season based game and when a season is over, you can select a new team or club for the new season. Apart from this, you can upgrade the fields and stadiums. You can compete with your friends to see who is better at creating and managing a great football team. 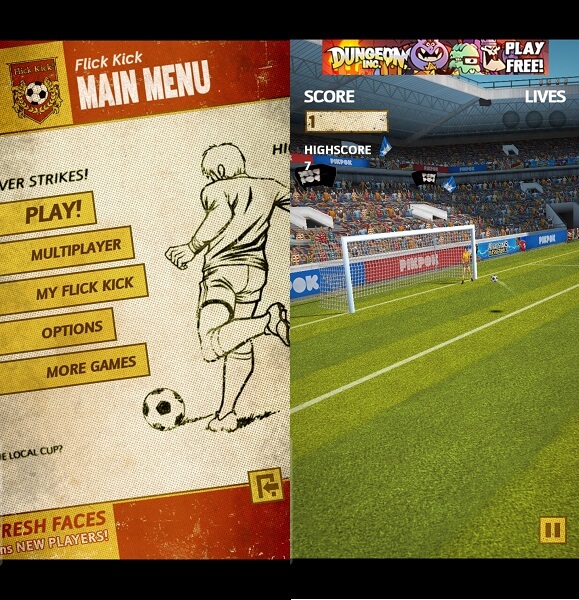 This is a football game that you can play offline. Here you have to flick the ball with your fingers to hit a goal. There will be a goal post and a few players as obstacles. You have to aim and shoot without hitting them. There are modes like arcade, bull style, skill shot and time attack where you can test your flicking skills.

You can also have practice or learn how to play if you want to make your game much better. It also has an offline multiplayer mode. It allows playing with friends in a single device. You can play it alternatively using the pass and play method with a friend. 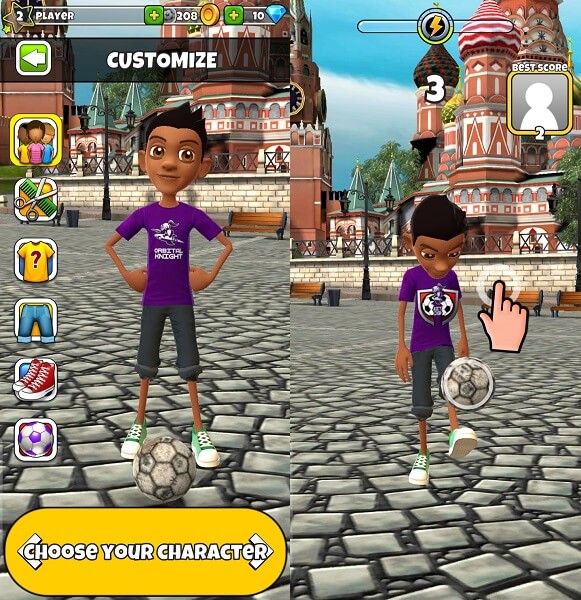 Play freestyle football and help the characters in the game to become the freestyle masters. You can juggle the ball and perform various tricks with it. The new trick will unlock as you keep on practicing and mastering the earlier ones. You can customize your character and the ball if you wish to. If you are looking for a new kind of football game, then this can be the one. 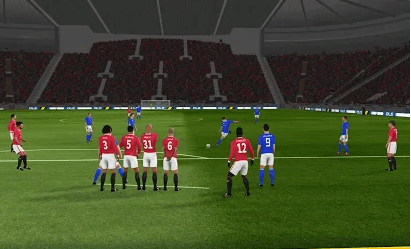 This is one of the best football games that you can play offline on your smartphones. You can play matches with some of the well-known football teams. There are onscreen controls with which you can play the game. It has great graphics and feels like watching a real football match. Not only play, but you can also manage your team like a real manager. Create a strong team, defeat your opponents and become the top player among various leagues and divisions. Dream league will also let you make your team the best among all the other online teams in terms of rankings. 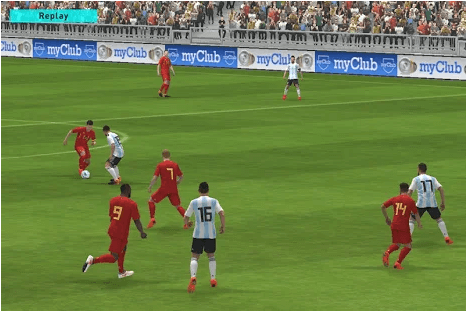 This is no doubt the best football game in this list. It has stunning graphics, smooth swipe controls, and wonderful gameplay. If you want to use the on-screen controls instead of swipe controls then that is also available. There are world famous national, international teams and players which you can select and play from.

It also has Local matches feature in which you can play tournaments and matches with nearby friends. You can create your own team from more than 10,000 players and have matches to see who’s the best.

Play this American football game, more commonly known as Rugby in Fanatical football. It will give you tutorials on how to play the game at the starting. You can play with onscreen controls and dodge, tackle, run and touch down the ball to the enemies goal post.

It is similar to soccer, but here the ball is carried with hands and one has to tackle a lot of opponents to reach their goal for a touchdown. This game is really good to play with and has a different theme of football game unlike all the above games in this list. Unfortunately, this game is only available for Android devices.

If you are looking for the best football game then without any second thoughts, it is PES. But if you want a football game that is different than the regular ones then you can play from Soccer Stars, Y8 Football, Kickerihno, and Fanatical Football.