Cricket is one of the most renowned and loved game across the globe. Everyone has played cricket in the streets, playgrounds or at home in their childhood. But now people don’t get enough time to play either on a cricket ground or any outdoor area. And to get that same fun on your phones we came up with some best cricket games for Android to fulfill your cricketing desire.

This is the smallest size cricket game among all the other in this list, just 2MB. Your aim in the game will be to beat the given score with a limited number of balls. It also has options for playing it online with random players or with friends.

With simple controls to play and small storage, this is really a fun game. Being small in size the game has its own downsides like not much graphics and limited shots styles. The thing that I didn’t like in this game app is that you only get to bat, no balling option for players. 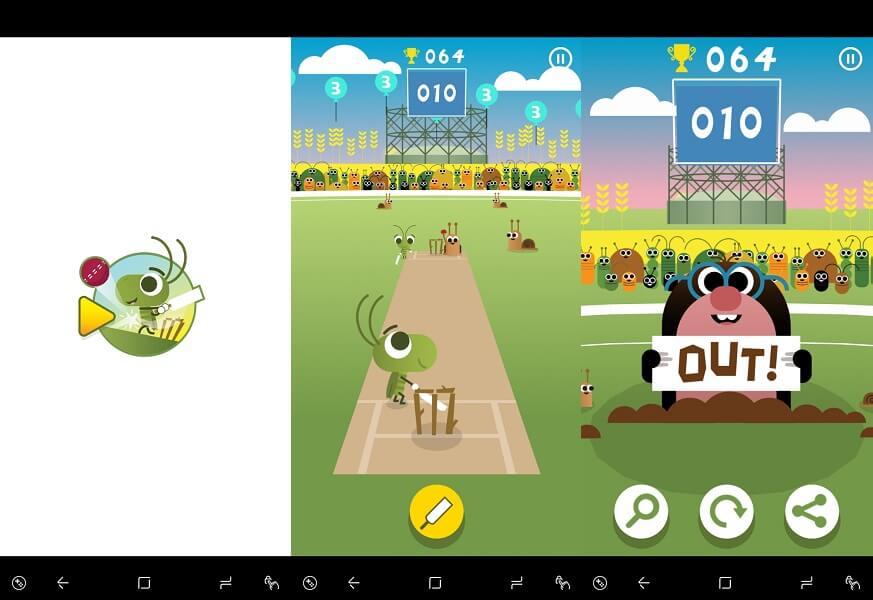 Another game just like Cricket Black but with some colorful cartoon characters and different playing angles. In this game, your aim would be to score as much as you can without getting out. You will have an unlimited number of balls but be aware of your wicket as you have only one player. Once you are out, the game will start from the beginning.

The game is simple yet addictive. It has only one control for hitting the balls, rest it runs by itself. Grab your bat and score as much as you can. 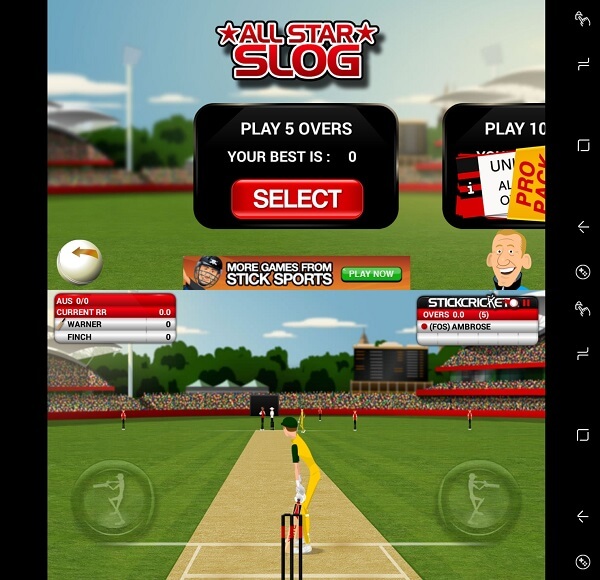 The gameplay of this game is almost like the above two but with a different character and game type. With only two controls to hit shot on the left and right side makes the game easy to play. It has a Performance Center to improve your skills in the game.

You can choose to play 5 different game types.

All Star Slog where you can make as much run as you can and then beat your own score in future matches. It has 3 modes of 5, 10 and 20 overs. You can only play 5 overs for free and for others you will need to buy pro pack.

World Dominations, in this you have to beat all the 14 countries to get to the top. You can unlock new teams by defeating the first one.

For the next two game types, you will need to make in-app purchases. World T2 and World Cup Edition where you will fly to other countries competing with them in the game. The last mode is Two players where you can play with your friends via a Bluetooth connection and beat each other’s score. 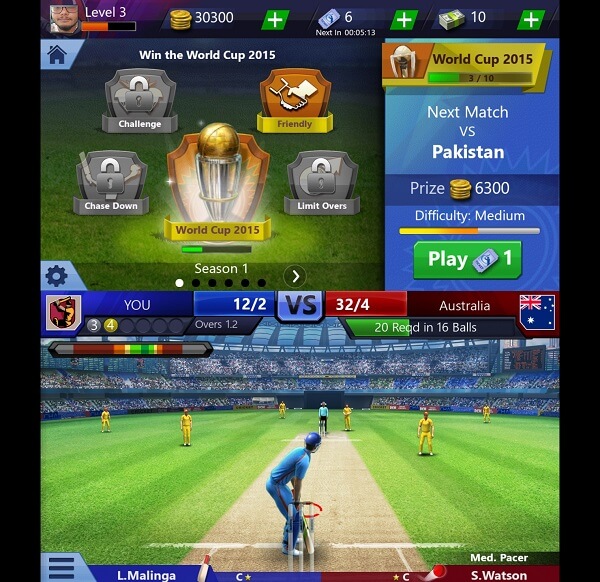 Defeat India, Sri Lanka, Pakistan, and Australia to become the champion of this game. This game has awesome 3D graphics and awesome user interface. Your team will have only 4 players which you will get at the start of the game. You can choose the team from which you will like to have the players or select World to get the players randomly. The players and their profiles are real. It allows upgrading the player to improve their skills.

The motive of the game would be to score more than your opponent within the set amount of overs. To hit a shot you just have to swipe on the screen to the direction where you want the ball to go.

You can play an online live match with any random person or with your friends by connecting via Facebook. You will increase the level of your game as you keep winning online matches. In addition to this, you can also play career to win all the World cups, Champions cup, Superseries, and Premier leagues. 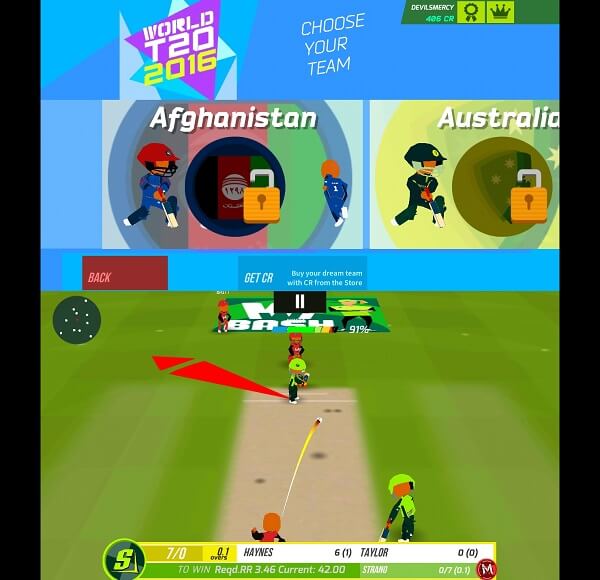 This is one of the best 3D cricket game for your Android phones including many modes of game to play. You have to beat the given score within the overs provided. The overs depend on the mode of matches. It has 10 to 20 overs matches.

With real teams and players, you can play World championship, IPL, Ashes series, Asia cup, Aussie bash, World T20 or tri-series between Australia, India, and England. The developers are working on bringing some new modes and series in the game.

Apart from this, the game features 360° shot selection, you can hit in any direction. You can also choose from the difficulty modes to set the challenge according to yourself. Again in this game, you can only bat, the innings for bowling is automatically played and the score that you need to chase is provided. 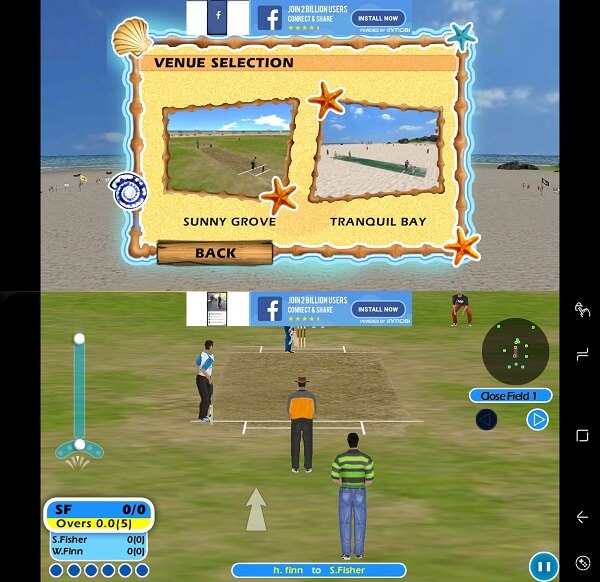 Set or beat the score of your opponent team in Beach Cricket in the heat of the sun while hitting some amazing smashes. This game has two teams from which you can select for yourself and two cricket fields to choose from, Sunny grove and Tranquil bay. Unlike the above games, not only you can do batting but bowling also with 11 players in each team. You can set the fielding according to your gameplan and change the camera angle.

In addition to that, you can create your own team. It allows editing of the team name and its abbreviation. Also edit the player name, their batting and bowling style too. You can have a match of minimum 5 and maximum of 30 overs. 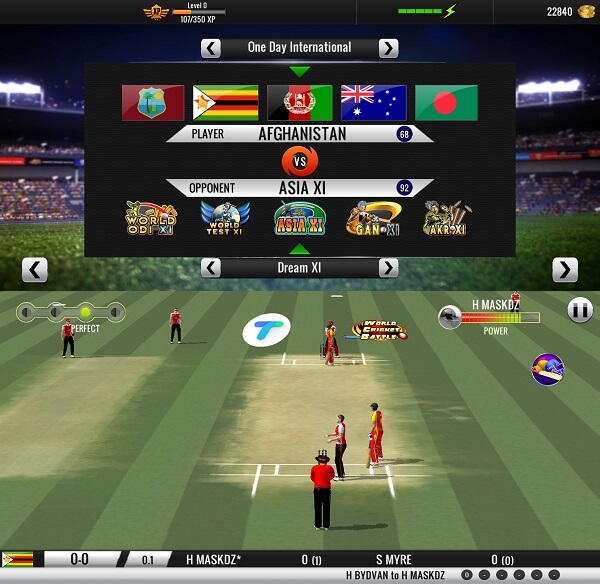 Though this game is still under development, it has secured its name on the list of best cricket games for Android due to its real like gameplay. You will feel like watching an actual live match on your device with all the after and before match animations just like in real matches.

You will have the option to choose teams from different leagues, one day international or Dream XI. It will allow having a match between different leagues and teams of your choice. Apart from that, you can select the overs according to your desire with a minimum of 2 and maximum of 50 to play from. You can also select different camera positions.

Now this game not only looks real, but the method of playing is also real. It features Rain interruption, D/L method, Net practice, Snickometer, Commentary box and many more. This is a really good game for the die-hard cricket fans to play. 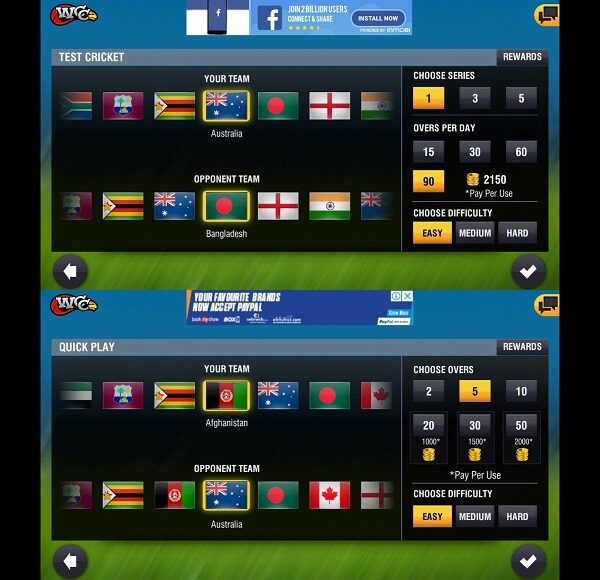 Another cricket game to play with the teams from around the globe is World Cricket Champions 2. You can choose to play a quick match or a test series. It allows selecting the teams for both, you and your opponent. You can also select the over, number of matches (in test series), difficulty, stadium and weather conditions for the matches. You can also customize the jersey color if you don’t want to go with the existing team jersey.

Apart from that, you can also use autoplay to finish any innings without playing. In the game, you can challenge your friends online or join some gangs of cricket groups. It also has a practice mode to improve your batting and bowling skills. This game allows you to set the graphics quality so that there won’t be a problem running it in any device.

Moving ahead, this game is mostly like the above, World Cricket Battle, but with some fewer teams and features like D/L methods etc. All over this is really a nice game to play. 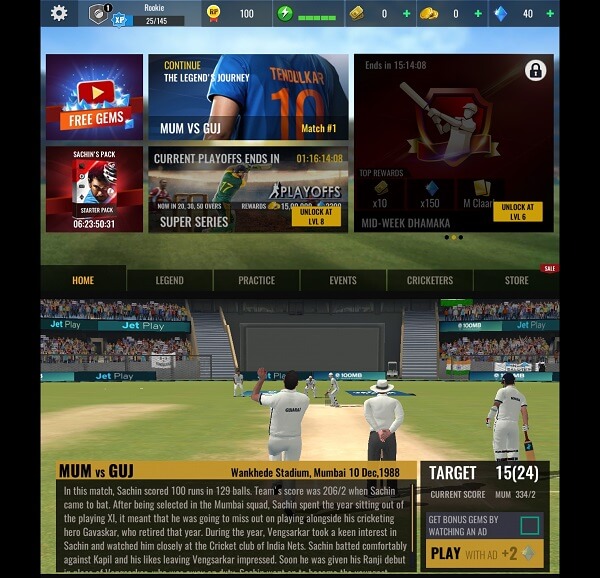 The world of cricket cannot be completed without Sachin Tendulkar and his jersey number 10. There would be no single cricket fan who will not recognize him. So this game brings you the chance to play as the master blaster himself.

This game has two modes Legend and Events. In Legends you will get to play all the matches that Sachin himself played with all the same stadiums and conditions. Score as much as you can and attain RP and goodwill to increase your game level.

In addition to all of this, they have an online contest frequently. You can take part in it to win merchandises signed by Sachin Tendulkar himself. Apart from this, you can have a practice session with tips from the master blaster. You can also see how many players you have collected in cricketers. The graphics of the game is not that great but fine to play.

Now if you combine most of the feature from all the cricket games listed above, you will get Real Cricket 18. You can play a quick match, practice on the nets or play from a number of leagues and tournaments. It has live commentary for each game you play.

It has animations for player auctions and match celebrations. You can also see before and aftermatch animations just like World Cricket Battles. It has signature shots of many players which you can use in the matches. It allows modifying the camera angles, quality of graphics and some more options in settings.

You can unlock different leagues and stadiums by leveling up in the game or making in-app purchases for that. In addition to this, you can also buy bats, balls, shoes, and gloves from the game store for your players. You can also choose to play the game with a keypad or by swiping the screen.

These Were The Best Cricket Games For Android

We have provided the list of top 10 cricket games for Android which can be played by anyone, offline and even online. All the games are free to play and download. However, there are In-app purchases to unlock different modes and levels.

If you are looking for a simple yet great cricket game then Stick Cricket is the one you can go with. But if you want good graphics, various player and additional features then you can choose from World Cricket Battle, Sachin Saga and Real Cricket 18. World Cricket Battle is the best among all of the games, as it has some real game features like rain interruption, D/L method, etc, which is hard to find in other games.