Carrom an indoor board game that can be played by people of any age. This game has its origins from the Asia continent and became very popular after World War l. Now as the time has changed, we do not get time to play it in real but with the help these best carrom board game apps you can enjoy playing it on your Android smartphones. 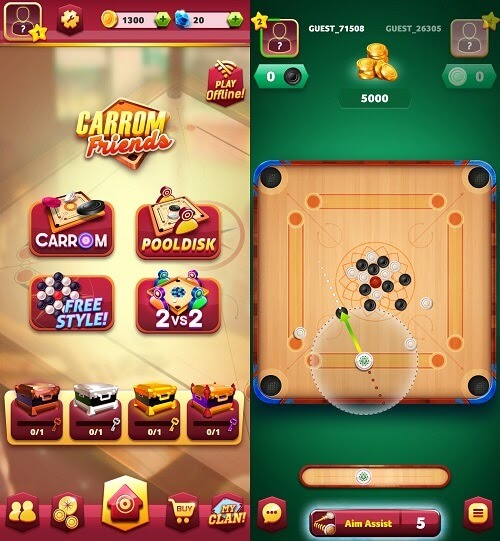 Who doesn’t love carrom? It’s a game that we would never miss a chance playing. But it becomes quite impossible for all friends to gather daily and play carrom. So, how about playing it online whenever you get some free time? Sounds interesting, right?

Carrom Friends is a perfect game for all the carrom lovers. Various mind blowing modes of Carrom Friends will make you fall for this game. All the friends gathered together but don’t have a real carrom board? Carrom Friends is here to help you out with its offline mode. Unlock exciting stickers and pucks and brag in front of your friends. Join the weekly and monthly events with your clan and win exciting rewards. There’s so much to do when you have Carrom Friends with you. 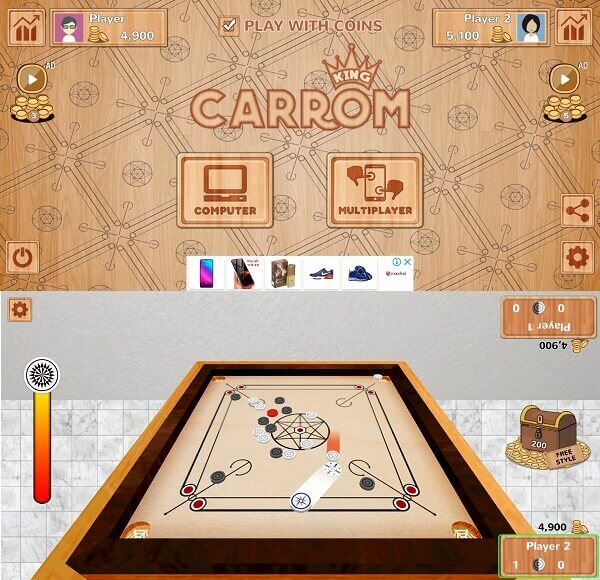 This game will give you the experience of playing real carrom. You can play a match against your Phone itself or with your friends in offline Multiplayer mode. It also has two types of game you can select from, Freeplay where you have to hit as many coins as you can in the pockets. Each color coin will have different points.

Another mode is Black and White, where the player has to score all the desired color coins before their rival wins. The game is simple to play, you have to drag, aim and pull the bar to shoot the striker. 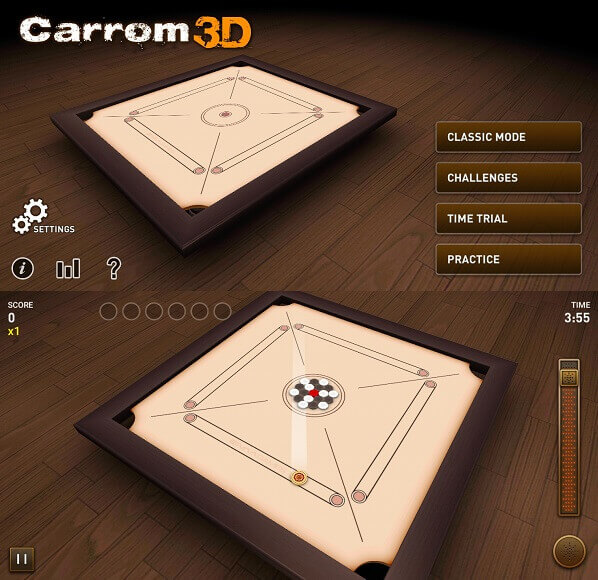 You can play from different modes in this game with different difficulty accordingly. In  Classic Mode, you can play a Vs match with the CPU or with 2 Players. It also has Challenges with various levels which will help you in learning different shots and master hard levels.

Apart from this, you can also play Time Trail where your aim is to pot all the coins before the time runs out. Not only this you can also Practice improving your game to face different challenges. There are different styles of striker which you can buy and use in the game. 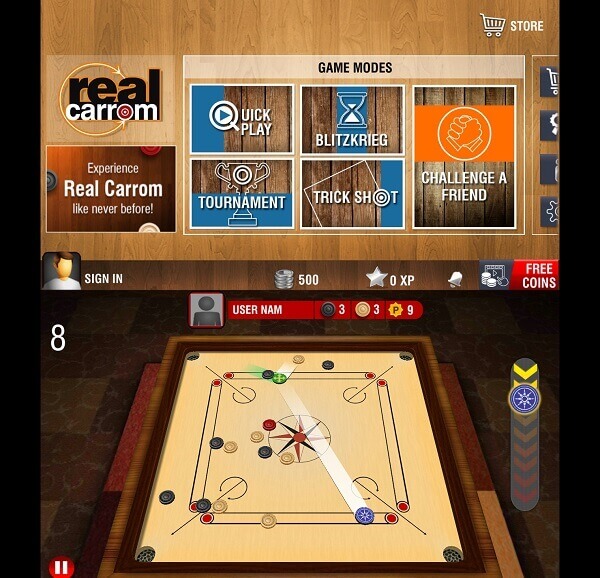 Though this is just another carrom multiplayer game with similar graphics and gameplay, it has something more to offer you than other apps. You can play from 5 different modes i.e Quick Play, Blitzkrieg, Tournament, Trickshot, and Challenge a Friend.

For each mode, you can select whether you want to play a Single player, Online or Local multiplayer matches. It also allows selecting from 3 different difficulty level according to your desire.

Apart from that, it has various boards and strikers which you can unlock and use it to play in the game. The variety of the boards are really impressive, you just have to earn coins by defeating your opponent to buy them. You can also watch tutorials on how to play the different modes of the game if you are facing any issue.

This game is the perfect alternative for Carrom 3D FREE with similar graphics and the way to play. The only place where it differs is that it does not have different game modes to play.

You can only have a match with the CPU. Though you can select different strikers in the game and change the settings for the guiding line in the board. 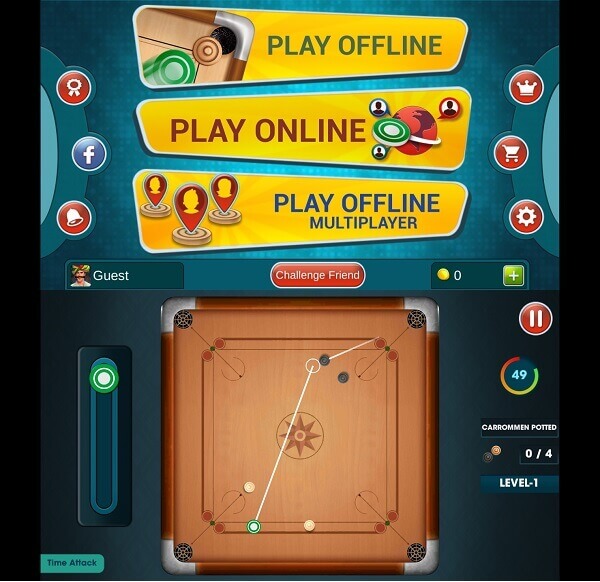 Yet another carrom board game that you can play on your Android devices. Like every other carrom game, you can Play offline matches and clear various levels. You can also play multiplayer matches both Online and Offline with your friends or different players.

This game also has modes like Free play, Black & White and in addition to that, it also has another mode, Pot the queen. While comparing to other apps, this game has less graphics. 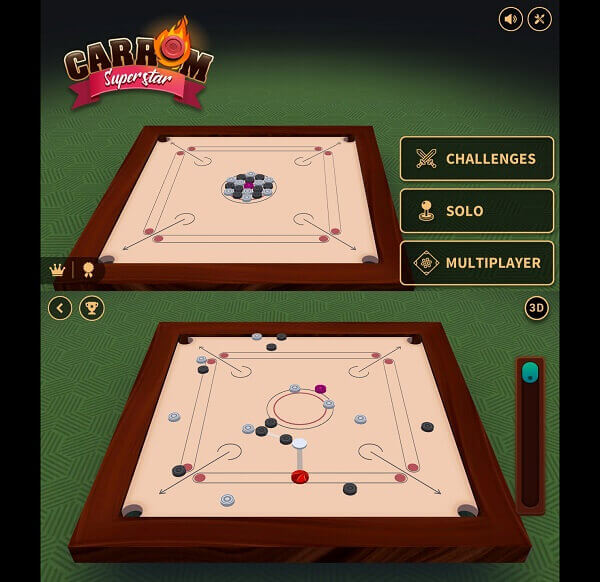 In this game, you can play from 3 different modes i.e Challenges, Solo and Multiplayer. You can clear various levels and increase your game skill by earning all the stars in Challenges. The Solo mode will help you in practicing your shots.

In Multiplayer you can play matches with your friends or with the computer. You can select the game type from Freestyle or Black & White with a total of 4 players. This game allows you to select the view of the board from 2D or 3D anytime while the game is being played.

Mega Pocket carrom is the simplest game among the list of best carrom games for Android. You can either play single, 2 players or 4 players match with your friend in one device like almost all the other carrom games.

This game differs only in the way how it is played. Unlike other games, you have to swipe your finger in the direction you want to hit the striker. The speed of the striker will depend upon your swiping speed only.

Best Carrom Board Game Apps For Android You Can Download

All the apps are similar except the graphics and game modes differs. You can select any of them to play with your friends. If you are looking for an online carrom game then you can go for Real Carrom 3D: Multiplayer or Carrom Live: 3D. Rest all the games can be played offline with your friends, so enjoy chasing the queen and scoring the game.