As you probably know already blue spectrum light is bad for eyes. When you are a nighttime reader, then you will also have to keep your health in check since blue light filters are a must. It gives great joy to be able to read all the articles that you have back logged at night. But you don’t necessarily need to strain your eyes for your intricate reading session because after all, we all crave for a good night sleep. While iOS comes with the night mode feature, Android, unfortunately, does not have this feature as its default. But there are numerous third party applications which compensate for this lack of feature in Android devices. Down below, there’s a list of best night mode apps that are meant for Android to keep the screen warmer at night and helps with the blue light filter. 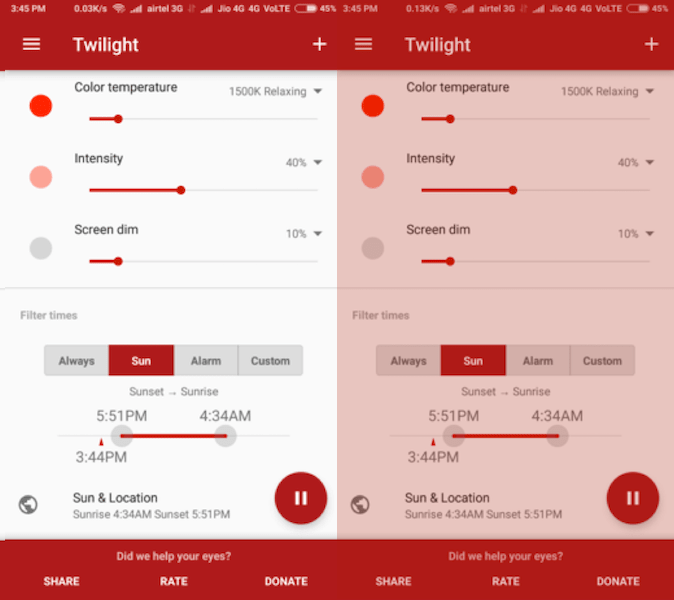 Twilight is most popular night filter apps out there in the market for Android devices. This app doesn’t require your phone to be rooted. Twilight also adapts the screen brightness to the respective time. If it’s daytime, the app will mount a little red filter above the entire screen to look after your eyes. Unlike other apps, twilight is present in your notification center from where you can directly use the app thus reducing the hassle. 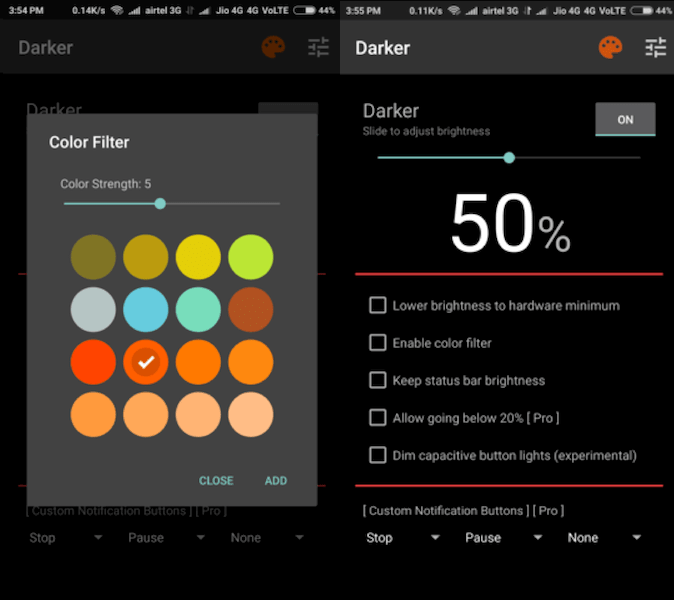 It is a very compelling Android app which will protect your eyes. This app lowers the brightness level of your mobile and also enables color filters. This app also sports the feature of switching your phone to different display profiles automatically. It also has a pro version which comes with even more features. 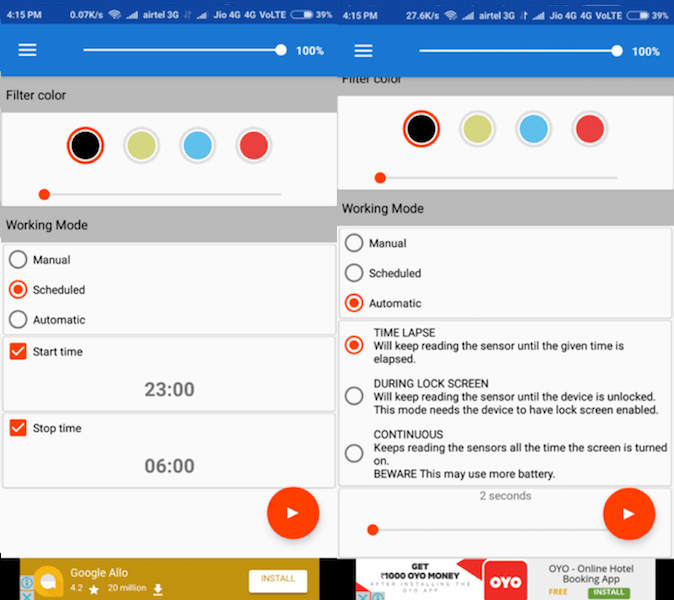 Midnight lets you schedule the starting and stopping time of the filter you would like to use on your Android device. It, unfortunately, doesn’t have the feature which will determine your location and change the profile accordingly. This app has a very sleek UI interface where a round slider lets you adjust the various color variants. The setting also dims your phone screen in darker environments. 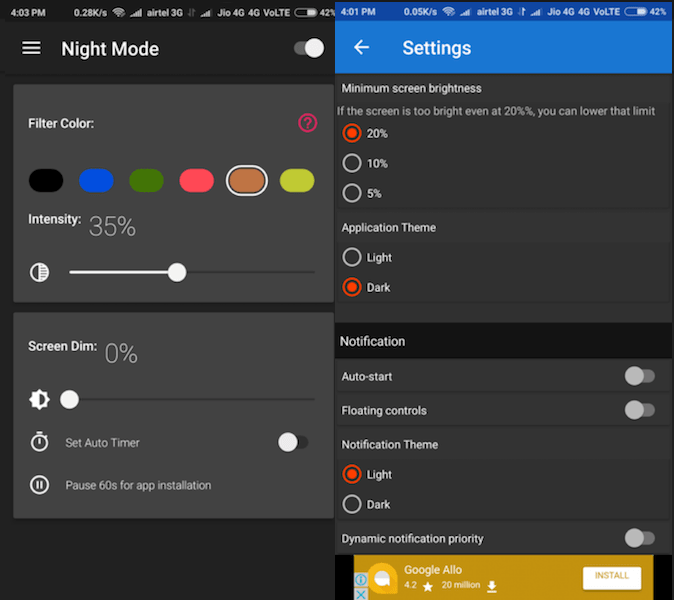 Night Mode is packed with a range of color warmth profiles and is compatible with almost all Android devices. The UI is extremely user-friendly where you can use the slider to increase or decrease the intensity of brightness levels. This app also has a timer feature which lets you pause your app affects for some times if you are doing something vital or installing an app. The app doesn’t weigh that much but gets the job done. 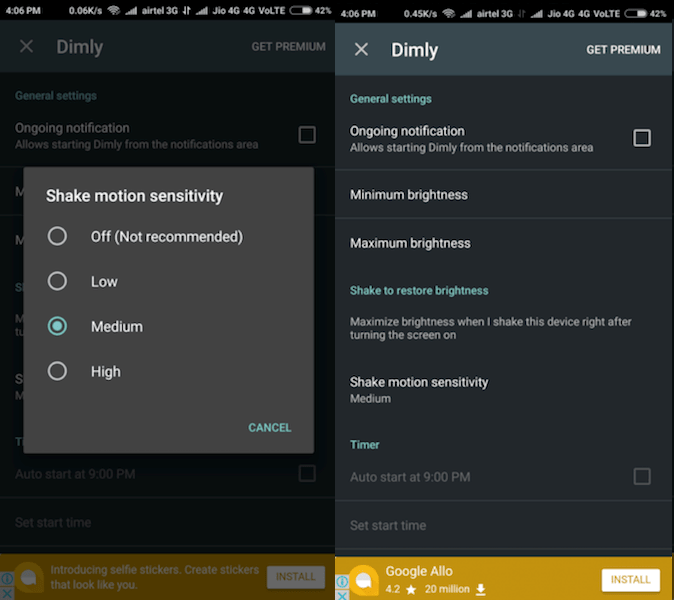 Coming with an even simpler interface, Dimly offers quite some features for Android users. Its minimalistic UI sports a basic interface through setting option. This app lets you shake your device to restore to its default state discarding all in-app effects. A top version of this powerful app includes a timer feature and makes it ad-free. It weighs very less so doesn’t affect your phone performance. 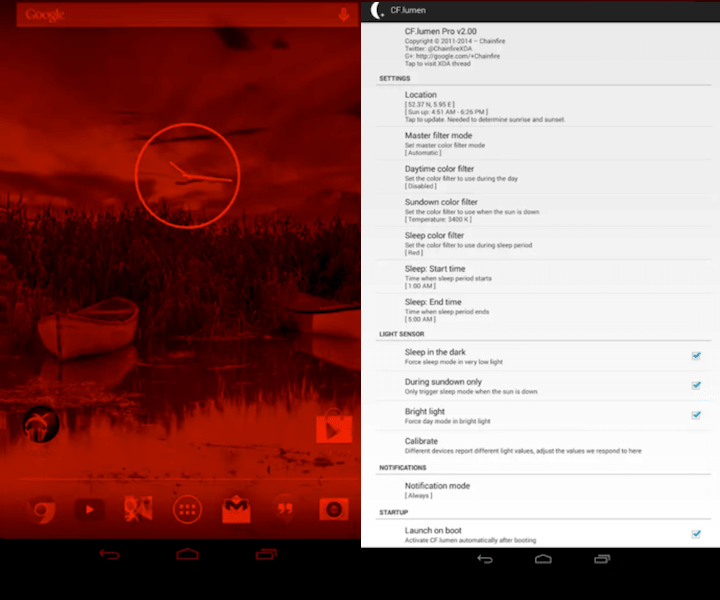 This is not necessarily an exclusive root app, but you would be amazed to see its exclusive root features. The in-app features render the filters. The built-in light sensors help the app to calibrate the various display options on your Android phone. It also studies the dawn alarm thus it can provide you better visibility even when it is dark outside. There are blindness enhancements options with settings.

Studies and statistics revealed have warned us repeatedly, reminding us about the ill-effects of using gadgets. The exposure to light at night, or more specifically, the exposure to the short wavelength blue light affects the quantity and the quality of your sleep cycle. Exposure to blue light affects your brain functions and also suppresses the secretion of melatonin, which is produced exclusively at night. So, to counter that you can make use of the night mode apps mentioned here.

Which app are you going to use? Drop a comment to let us know.