Amazon is the worlds largest online retailer company based in Seattle, Washington. It was originally named Cadabra in 1994, but Jeff had to reconsider the name when his lawyer misheard the word as Cadaver. In the English language, the word “Cadaver” translates to a corpse, which by no means a good name for a company that sells books.

In 1995, Jeff came up with a name for the company, and that name was after the mighty Amazon river. There were two reasons behind naming the company after the river. The first being to indicate the scale of their business and to support their tagline “Earth’s biggest book store“.

The second reason was to be at the top of website listings, as in those days website listings were often alphabetical. So this was the history behind the naming of the company from Cadabra to Amazon. But wait, if you think you have known enough history about amazon.com, then you are on the wrong side. For the reason that the history behind the Amazon logo and its meaning is far more interesting and informative.

Ever since 1995, when the company first started as an online platform to sell books, it has had three different iterations in its logo design since then. The world-renowned Amazon logo with a smile on it came in existence in the year 2000 after the third and last iteration. We have divided the evolution of the Amazon logo into three phases, for better understanding.

In the first phase of the company, they were only restricted to selling books online. So the logo they created was to advertise their specialty.

The initial logo of Amazon was a river flowing through the alphabet A. And amazon.com along with the company’s tagline “Earth’s biggest book store” was written under it. Also, the logo was adorned with a beautiful water texture in the background, which made it more pleasing to the eyes.

In the initial years, the company made some good profit which encouraged them to expand in other segments as well. Consequently, they started to market a large music collection along with the books on their platform. The expansion demanded a change in the logo, as the initial logo was to advertise books only.

The new Amazon logo was created keeping their expansion in mind and to advertise their new products. This time the background was plain white, upon which amazon.com was written with a near straight yellow line beneath it. Also, it featured their new tagline “BOOKS, MUSIC & MORE” as well.

It was the year 2000 when the Amazon become what it is known for today i.e. a 1-stop shop for buying anything online. Now the amazon.com was not just for books and music, but you could order literally anything from it. This made Jeff ask Turner Duckworth to design a new logo for the company.

The new logo created by Turner Duckworth had similarities with the previous logo of the company. But this time, the logo was shortened to fit the web address in the white background, along with a yellow arrow beneath it. The logo seems to be pretty basic at first sight, but there are some hidden meaning behind it. This Amazon logo remains one of the best examples of creative brilliance, to the extent that it is still used by the company even after so many years.

It’s interesting to see how the online e-commerce giant, Amazon smartly came up with the logo design. The logo is too simple and clean, but there are too many meanings behind that simple Amazon logo. Actually, if you see it properly, it’s having a yellow arrow. The arrow is not just a swoosh, the arrow represents a smiley, a smiley for the smile it brings to customers face.

Another point to note is that the yellow color arrow starts from a to z which means that Amazon sells all kinds of products from a to z. Also, by having the arrow in the logo stretch from a to z, Amazon assures its customers that the company can meet their every need.

And if you look closely enough, you would see a smiling human face in the Amazon logo. The two ‘a’s in the logo look like the human eyes and the arrow looks like a smile with a dimple at the end. Human phycology says that we humans put a lot of trust in a smiling face. And that’s why Amazon uses a smiling face in their logo so as to win their customer’s trust.

I was too surprised to see the concept behind the Amazon logo. And I too want to add a concept for Amazon’s name and that is Amaz(ing)on(line) retailer.

How Logo Helps Amazon To Build Its Bussiness

When you order a product from Amazon it comes in a cardboard box with the Amazon logo over it. The smiley logo gives the customer a sense of joy even before they open the package. Also, the packaging from Amazon is of top-notch quality and therefore people use the same boxes again and again to ship other items. This helps Amazon to advertise its brand with the help of its logo and packaging.

Logos are as important as the name of the company for any business. A logo makes a significant impact on the public perception of the company. People at Amazon were aware of this fact, and that’s why they are at the pinnacle of success today. 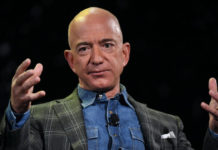 The Success Story Of Jeff Bezos