Microsoft Edge was launched with Windows 10 in order to replace Internet Explorer, and it was very much successful in doing that. However, it did more than just that. As it also successfully stood against giants like Google Chrome and Mozilla Firefox. And there are a lot of reasons for that, like its user-friendly interface or that fact that it runs so light on the system. However, Microsoft took it one step ahead when they came out with their Chromium-based Edge browser for macOS, even though it’s a preview version for now. And if you’re a Mac user, then you should definitely give Microsoft Edge a try, because it’s truly amazing.

So, if you’re now convinced, then read the full article to be guided on everything about using Microsoft Edge on Mac. And you might need guidance because Edge is not available on the Mac App Store like it is available in the iOS app store.

Recommended: How To Change Default Search Engine On Microsoft Edge

Use Microsoft Edge On Mac

Before actually installing Microsoft Edge for Mac, you should know that there are 3 Microsoft Insider Channels. All channels work on Mac and almost similar with some slight differences in their time periods of updates:-

1. Canary Channel – Are you the kind of person who wants to get updates as soon as possible? Well, then you should go with this channel as it receives updates almost every night. However, this channel is not as stable as the other two. Because getting updates within a day means those updates aren’t tested for very long.

2. Dev Channel – This channel is more stable than Canary. The reason behind this is that rather than getting updates every day, it receives updates every week. This means the updates that you are getting are tested for a week.

3. Beta Channel – Beta channel is the most stable channel among all the three. That is because you get updates every 6 weeks. So, in short, the updates in this channel are certainly an improvement by testing them on the other two channels.

Now that you know about the three Microsoft Edge Insider channels, you can decide which channel you want to go with and follow the below steps. (Note: For this tutorial, we’ve used the Canary Channel. But you can go with any channel and follow the same steps.)

1. Get to the Microsoft Edge Insider page if you aren’t already there. And when you’re on the page, click on the download button below any of your desired channel. (The download size for all the channels is less than 135MB)

2. After the pkg file is downloaded, click on it to start the installing process by clicking on Continue > Install.

Note: You’ll have to provide your Mac username and password to initiate the installation. 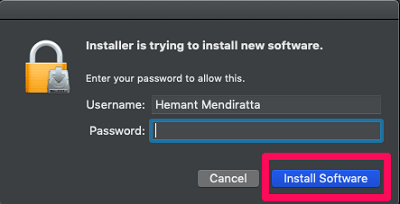 3. As soon as the installation is done, you’ll be asked to move the installer to trash or keep it in its current location. Here we click on ‘Move to trash’ to be able to go further.

Now, you’ll be asked either to Start with Your Data or to Start from Scratch. If you go with your data, then you can import all your Google Chrome data to Microsoft Edge. This data includes everything like your search history, cookies, cache, bookmarks, etc. This is possible because both Microsoft Edge and Google Chrome use the Open-Source Chromium engine. 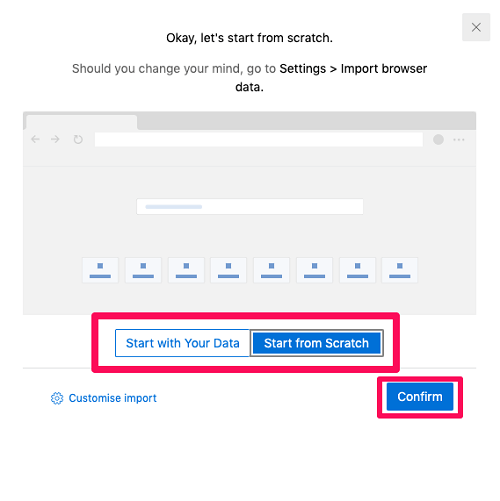 However, you can also start from scratch and import your Chrome data later, which we did for this tutorial.

4. That’s it. Now, you just have to select a look for the new tabs and you’re good to go. 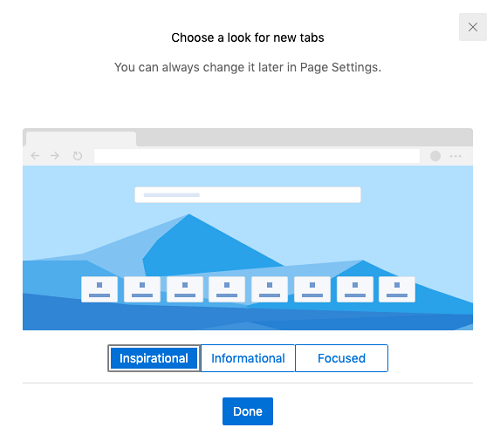 Doesn’t matter if you start from scratch or start with your data, the steps mentioned below will remain the same. And by following these steps, you can import all your important Chrome data to Microsoft Edge. That said, this method will not import your Chrome extensions to Edge. You’ll have to install the extensions on Microsoft Edge manually.

1. If you have started from scratch, then navigate to Settings > Import Browser data. However, if you straight away started with your data while installing Edge, then skip to the second step. 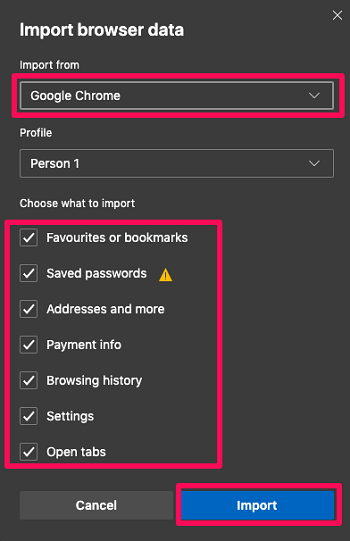 3. Next, authorize the import by clicking on the Allow option. 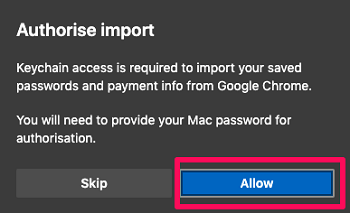 4. Finally, provide your Mac password one more time to complete the process.

Now, you’ll see that all your Google Chrome History, cookies, cache, and bookmarks will be imported to your Edge Browser.

We all know how useful extensions can be. And of course, a number of extensions can be installed from the Microsoft store for the Edge browser. But sometimes it may happen that you want to use an extension on Edge, that is only available on the Chrome Web Store. Well, fortunately, the chromium-based Microsoft Edge browser you’ve just installed on your Mac allows you to install Chrome extensions.

All you have to do is visit the Chrome Web Store and click on the Allow Extensions from other stores option appearing at the top.

A notification will appear asking you to confirm the same thing. Just click on Allow to move forward.

Finally, just find the Chrome extension you want to install on Edge and click on Add to Chrome option.

You’ll see that the extension has been successfully installed on the Microsoft Edge Browser.

Edge by Microsoft has surely become one of the best browsers. From a user-friendly interface to its simplistic, yet interactive appearance, everything with this browser is pretty amazing. So, it’s common for every Mac user like you to think about using it. And you must have learned by now that you can very easily install Microsoft Edge on your Mac. Also, what’s more, is that you get to choose from 3 Microsoft Insider Channels.