Pool and snooker are one of the best indoor sports that one can play. But buying it can put a big dent in your wallet. Don’t be worried, you can still enjoy playing pool games on your smartphones. I myself play them whenever I get bored or have to pass my futile time. There are various kinds of pool games available and almost all of them are similar, as the rules of the game remain the same.

The methods of playing are also almost similar in all the games mentioned here on the list. But you will get games with different graphics, animations, and gameplay. Some of them are in 3D while some in 2D. So let’s have a look at some of the best pool games that you can download and play for free on Android and iPhones. 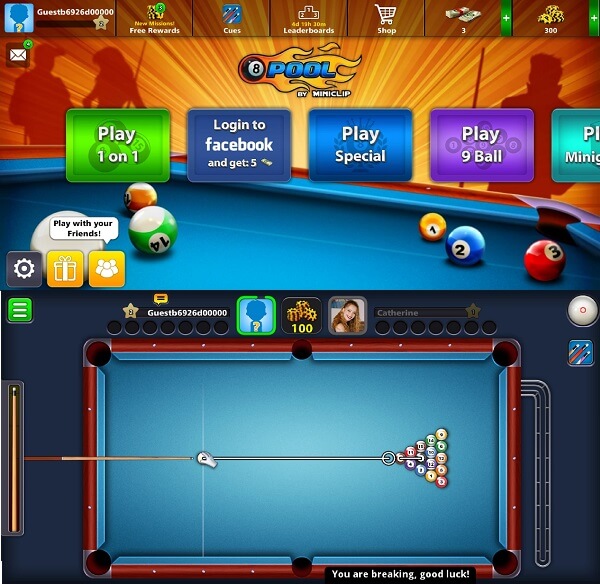 With this game, you can play 8 ball pool with various people online from around the world. Not only this you can also add your social account and invite your friends to play matches with you. There will be time for each player to play the shot. In case someone fails then the turn will be passed to the next player. It is one of the best online multiplayer games that you can get your hands on. You will earn coins for each match you win and you can even play matches for higher rewards and bets in various tables.

You can use the earned coins to buy cues and other powerups. Apart from this, you can also play this game as a guest without logging in from any social account and even play 9 Ball pool game or other tournaments to earn greater rewards and reach to the top of the leaderboard. This pool game can also be played offline in practice mode. 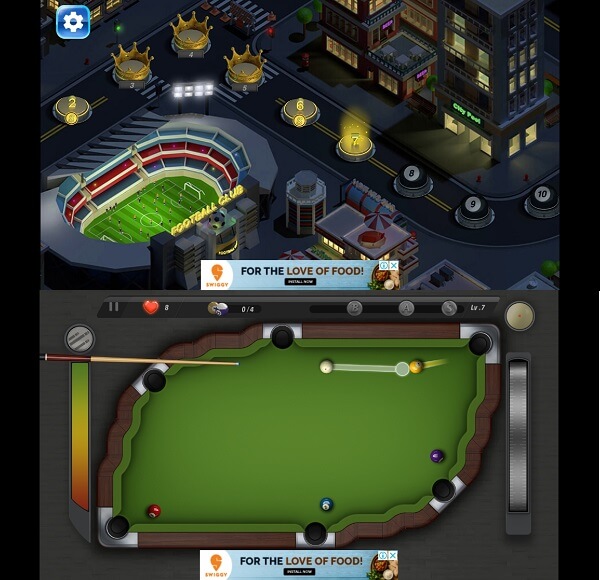 In this game, you will get to play pool but in a little different way. Here unlike the above game you can only play in various levels and clear the objectives given to progress to the next one. This is an offline pool game for Android and iOS users. You will get levels spread around the city map to play with.

What more this game has to offer is that you will get various kinds of tables apart from the regular ones making it more fun and challenging to play and clear the levels. You will also earn new cues as you progress through the levels. And in addition, there are no time limits to play the shots, so you can take your time. 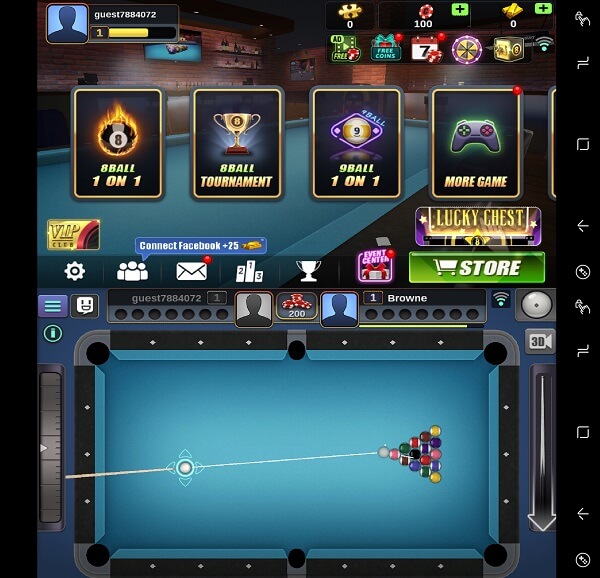 As the name of the game says, it is a 3D pool game. The modes of playing like online matches, tournaments, different bet amount, limited time for playing your turn, offline practice mode, playing with friends and all the components of this game are almost similar to 8 Ball Pool game.

It lets you switch between a 3D or 2D mode in this game as per your choice while playing. And it also has an offline mode for 9 ball pool game. You will earn coins in each match as you win which you can use to customize your profile and buy items like cue and other avatars for your profile. 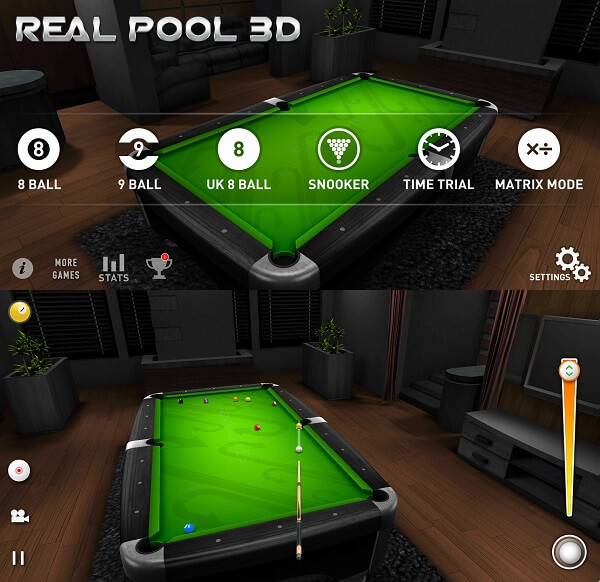 You will get to play from 6 given modes i.e 8 BALL, 9 BALL, UK 8 BALL, SNOOKER, TIME TRAIL, and Matrix mode. Each of the modes can either be played VS CPU or with 2 players on the same device. This means this game can also be played offline and you can even practice the game to improve your shots.

I really liked this game as it has great response and 3D animations. Furthermore, what I liked about the game is its settings and the options available in them. You can change the mode of playing from the flick, meter or pull and drag clue, customize the tables and even the room around the table. If you wish then it will also provide you with rules for each mode of the game which will help you understand them more clearly. 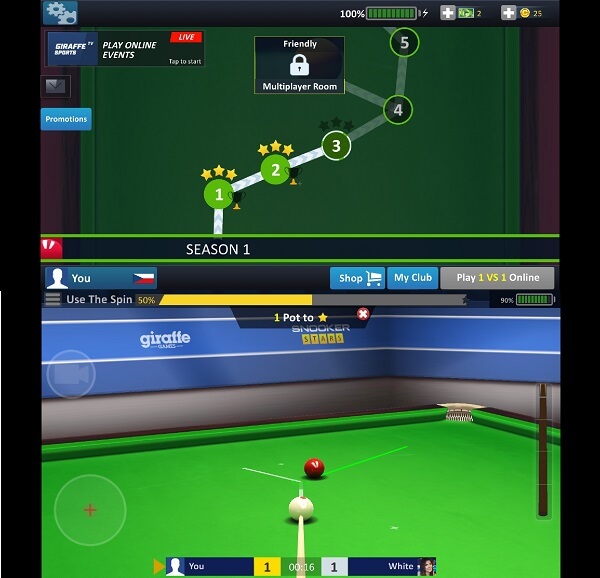 If you want to play snooker instead of the pool then you can check this one out. As you open the game it will teach you how to play the game and pot the balls. Here you can play season matches or 1 VS 1 online matches as per your desire. In season you will get to complete the given tasks and objectives in order to move to the next level of the game. While in online matches you can play full snooker game with players from around the globe.

You can also connect it to your Facebook account and invite or challenge your friends for a match. This game has great graphics and response is also great. In addition, you can also change the position of the camera while playing the game to determine the best shot and its angle. 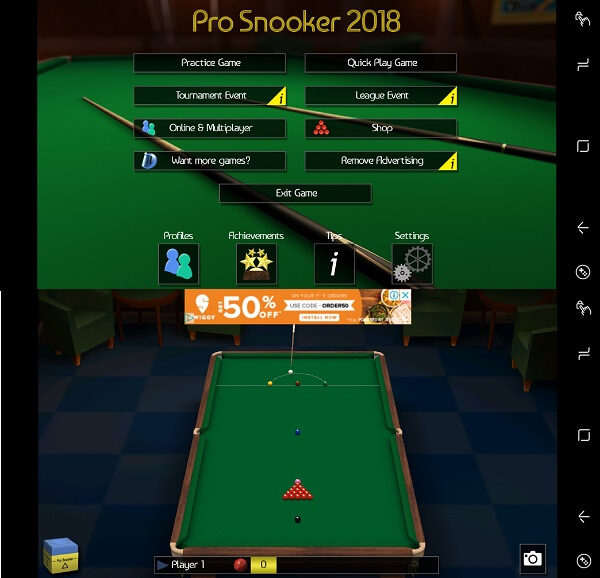 Yet another snooker game for Android and iOS devices just like the above one. In this game, you will get to play practice games with the computer and quick matches with 2 players or a computer as an opponent. There are tournament events and league events but to play them you will require in-app purchases.

Apart from this, you will also get to play online and multiplayer games. In these modes, you can play in two player mode on the same device, online with other players and even via local networks with your friends. You will also get to select from various types of tables and snooker balls as per your choices. To see how to play the game you can go to the information icon at the bottom of the screen. 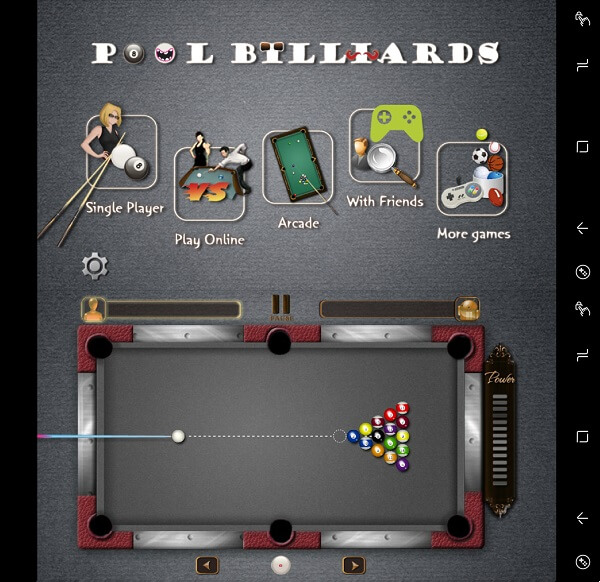 In this game, you will get to play from various modes like single players mode where you can select from two players, VS or time mode in either 8 balls or 9 balls game. An online mode where you can play with other players online in three different stages with different entry and prize amount. Moving ahead it also has an arcade mode. In this mode, you will get to play and clear various stages and all the levels inside them in the given limited chance.

As you progress through the levels the difficulty and objectives of the game will become harder. Apart from this, you can also play this game with your friends by logging in using your Google Play Account and inviting them via the same. It also allows changing the difficulty of the game, tables, cues and even enabling aim guideline for more precise shots. 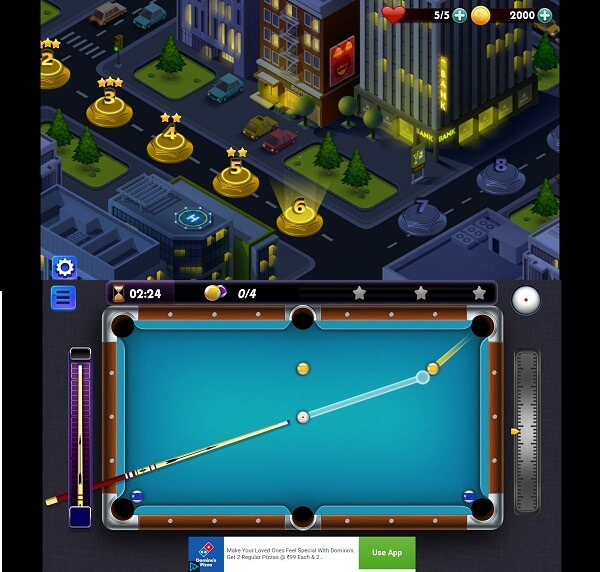 It is the combination of two games from this list. The stages and objectives of the game are similar to Pooking – Billiards City. While the pool tables, the method of playing and its representation is like 8 Ball Pool. You will have to clear the given objectives in the game within the given time or shots in order to progress to the next one and earn points. Make as high score as you can to reach at the top of the leaderboard in this game. 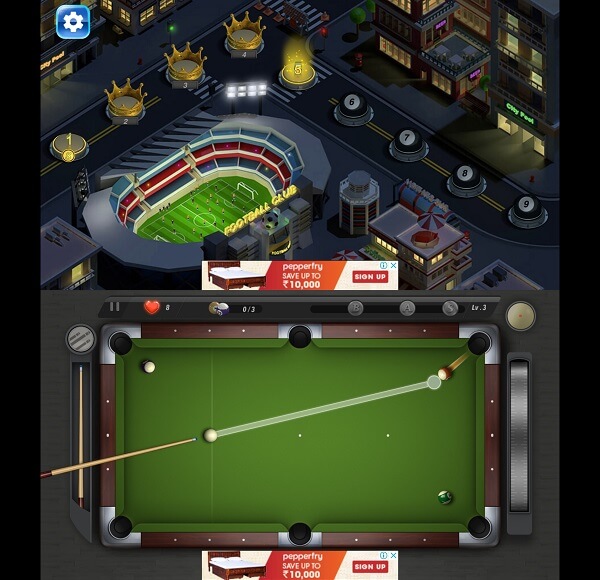 This game is the perfect alternative to Pooking – Billiards City that you will notice yourself once you play it. Here you will only get one mode to play from i.e. Arcade. Just like Pooking, you will get various levels scattered through the map of the city. You will have to clear the given objective in each level to move ahead to the next one. And the most important thing, this game can be played completely offline and is a 3D pool game. 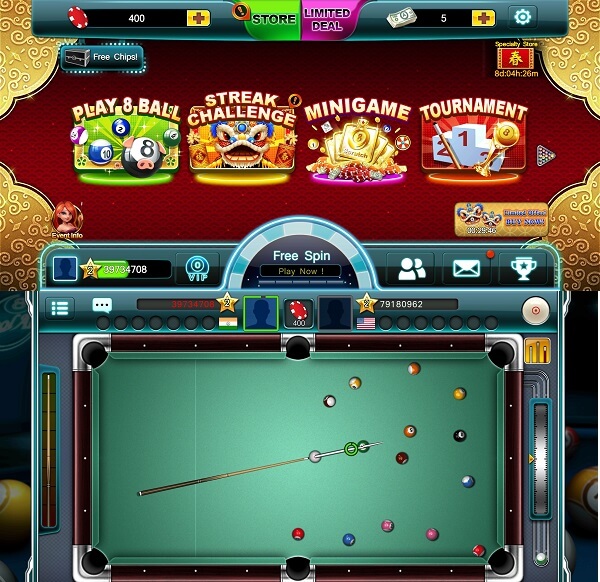 Last but not least comes Pool Ace. This is also a great pool game for those who enjoy playing online matches with other players. Here you can play 1 vs 1 8 Ball matches, take part in challenges to earn more rewards and even play tournaments to see who is the best.

Apart from this, it has 9 Ball game, Master challenge, and even a single player mode where two players can play the game in the same device. Defeat your opponents to earn chips and use them to buy new cues and take part in the challenges and tournaments.

So these were my picks for some of the best pool games that you can play for free. From this list, without any doubt, 8 Ball Pool is the best game as I always keep it on my smartphone and play when I wish to. Most of the games will also work offline, but in case you want a game that is completely offline then you can go for Billiards Nation. Which game do you prefer to play from this list? Or, are already playing from some time? Do share your experiences with it in the comments section below.