The world is fast moving with all the wondrous technological development that has filled our day to day life. From reeds and quills to the outstandingly luxurious fountain pens, to the modern age ballpoint pens, people have thrived to make writing easier and more convenient. However, a pen can only be wielded over a 2-dimensional landscape, it is impossible to draw in the air. But like a magic wand, a 3D pen allows you to do just that. It is a fun toy for children to bring in an idea about how structures work. On the other hand, it is an exceptional tool for professionals to create an astonishing world of art. The market is riddled with so many options for buying a 3D printing pen that it is likely to get confused. So, here is a list of 6 best 3D pens that 2019 has created.

Here Is A Table For Quick Reference!

If you have time on your hands then go ahead and read the complete article. 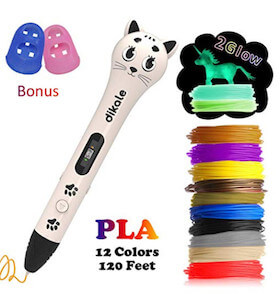 The Dikale 05A has a similar structure as that of any other pen having a cartridge and a fine nozzle for exuding “ink”. It makes use of PLA or ABS plastic filaments that are loaded on to the pen. On switching on, the plastic melts and is pushed out slowly through the fine nozzle at the tip, to the convenience of the user.

Starting from kids above the age of 5 years to budding or established professionals this pen can function as a toy or a tool for artistry. It is most innovatively designed, having an auto sleep function. This function particularly comes up as a savior when the pen is not being used for a long time, saving both electricity and damage to the product due to over-heating. 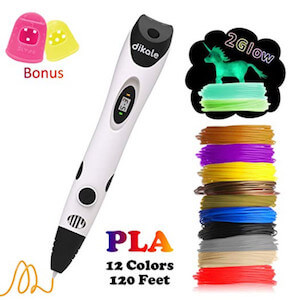 The Dikale 07A is a lovely 3D pen. It is loaded with extraordinary new features that were absent in previous Dikale products. At just $49.99, this 3D pen is a lovely toy to pass time for kids as well as a grand tool to create astonishing designs for adults. The pen features a ceramic nozzle which is specifically crafted to bear high temperature without damage. Since the nozzle can bear high temperatures it is also very easy to clean it and nearly impossible to clog which makes it secure its spot in this list of best 3D pens. 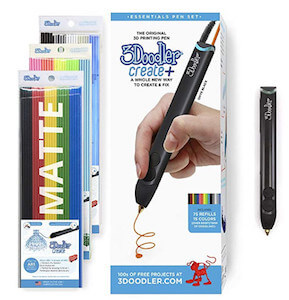 In the modern era, doodling is not only restricted to the 2-dimensional planes of a white paper. With the all-new 3Doodler 3D pen, now one can doodle upon nothing but thin air. The 3Doodler is wonderfully made and is one of the best 3D printing pens that serves as a brilliant pass time from kids to professionals. It is a simple device that is plugged into a power source, and one can doodle away to the heart’s content.

By the suitable use of a number of plastic consumables, this pen carries out its simple function. Crafted into a sleek, blue body, this pen is easy to hold and handle even for kids. The pen is packed with 15 different colored cartridges that can be used from the moment the pen arrives at your fingertips. 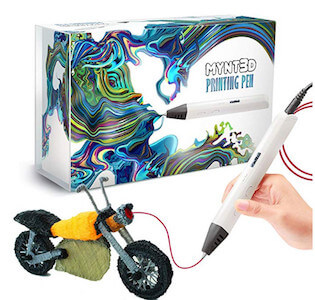 MYNT3D Pen is a grand utility tool to give life to a grand idea. It is the best 3D printing pen when it comes to ease of use. It is crafted with an ergonomic, sleek body that is easy to hold. The buttons are easily reachable without the least bit of problem, allowing this pen to be maneuvered in any way imaginable. It makes use of any kind of plastic filament as its “ink” provided the temperature is set right. Setting up this pen to create a work of wonder is extremely simple- attach the filament, plug in and heat the pen up, and extrude the design in your mind.

Cutting edge technology was used in developing this pen. It can be used to create toys, daily hack products, specimens of humongous structures and whatever the mind can think of. The pen consumes 5 volts of DC to function and can give a power output of up to 10 watts. It is a super utility product that can function as a toy for kids also. The user manual accompanying this pen is very easy to understand and work upon. 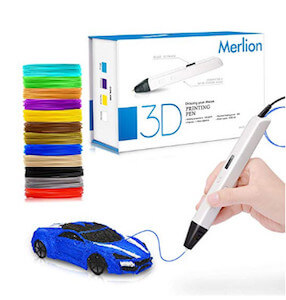 Give your child the freedom to create with the exciting Merlion 3D pen. Coming up as an exceptional 3D pen, this device allows for the growth of a child’s spatial thinking capabilities. It can also serve a budding artist or even professionals to create appealing masterpieces.

The Merlion 3D Pen is simple and powerful to use. It makes use of filaments that once loaded are extruded out of a heated nozzle. The pen is designed to perfection, having an ergonomic body, allowing long term use without the hands getting tired. One push extrusion feature is ingrained in this pen- this allows the extrusion process to start with just one push and the user need not hold the button for long periods.

The pen also features function keys at reasonable points which are easy to access, even swiftly. An instruction manual is provided with the 3D pen. This manual lists all the details as to the functioning of this pen and once gone through properly, one will become an expert. The instructions are provided in a simple, easy to decipher the language, which is even suitable for kids. 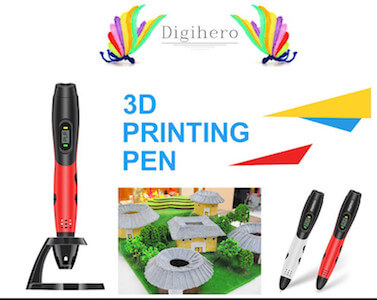 A 3D pen is an exclusive new addition to the list of wonderful stationary items and the DigiHero 3D pen makes sure to mark a spot. This pen is compatible with PLA and ABS type plastic materials and helps create wonderful toys, structures, arts and so on. With a 0.6mm nozzle, this pen can hold 1.75mm filaments that are extruded out of the hot nozzle.

This pen works with a minimum intake of 5 volts of electric current and features 3 different speed modes. Slow speed is suitable for detailing of structures whereas a fast-paced extrusion is superb to build the basic structure. Its thin body fits into the hand easily and detailed instruction manual makes it excruciatingly easy to use.

A 3D printer is one of the most fascinating inventions of the 21st century. However, due to the exceptionally high cost, it is not easily accessible to people. However, a 3D pen is a miniature version of it, kind of like a handheld small printer for 3D drawing or printing. It is a fantastic toy for kids to pass time, and an exceptional tool for professionals to give wings to their imaginations.

With the suitable use of a heating capsule, plastic-like filaments, and extrusion mechanism, a 3D printer is able to draw structures in thin air. The world is riddled with a humongous amount of options when one is looking to buy a 3D pen. To choose the best, most suitable out of them is like looking for a needle in a huge haystack. Selecting the best 3D pen may seem like an enormous task, but all one needs is a little magnet.

The key to buying a good 3D printing pen is to decide first-hand what its intended purpose is. It can serve as a gift or maybe a personal tool to pursue a hobby, or maybe a daily needs article to create works of art. There’s a huge difference between a toy and a professional tool, and the latter needs to be of premium quality for longer, more fruitful use.

Another key factor in buying a good 3D pen is to first decide upon the price one is willing to pay. Once the intended use is decided, it is sufficiently easy to put in a price bracket. 3D pens are available at as low as $30 to premium ones being priced as high as $200 or even higher.

Different 3D Pens are ingrained with different temperature settings. The compatibility of a 3D pen depends upon the range of temperature it features. PLA filaments can melt at temperatures between 170 and 190°C whereas ABS filaments require a higher temperature, up to 210°C.

It may so occur that the user needs to use the 3D pen for a very long duration of time. Long press push button for extrusion, highly heated nozzle, inaccessible function buttons while in use, a huge structure of 3D pen, are all such factors which need to be avoided. These factors will tend to make the hand and fingers sore from using over a long time, and they aren’t one bit comfortable.

While choosing a 3D pen, a buyer should bear in mind to buy a sleek model that has highly accessible function buttons, even during use. Newer models of the 3D pen are given a one-time push button- on pressing it extrusion starts, on pressing again, extrusion stops. Such a button is very handy as it allows a better grip over the pen as well as better maneuvering.

A 3D Pen is a technological product and is likely to malfunction with even the least bit of hardware problem. It is recommended to always buy a 3D Pen that has good backing of a warranty. A lot of 3D pens around the world like the Dikale 05A and 07A, Merlion 3D pen and so on are backed by a 30-day full refund policy along with a 12 months warranty period. Irrespective of the quality, price and brand name of a 3D pen, one should always go for the product giving the better warranty option.

Throughout the mechanism of working of a 3D Pen, time plays a very important role. From plugging it on to switching it off, the 3D pen’s use runs through several cycles the first one being heating up the pen. The faster the pen heats up, the better, as it saves unnecessary preparation time.

Once the filament is inserted into a heated up pen, the second cycle starts which comprises of the time it requires to release the extrusion. In most 3D pens, the speed of extrusion can be maintained and they are preset with a fixed number of speeds in which the extrusion takes place.

The third and most important constraint of time is the time the extrusion requires cooling down and solidifying. Unless the extruded material cools and solidifies, oftentimes it becomes impossible to carry the work forward. This is achieved either by complete dissipation of heat after extrusion. This can also be achieved by having a nozzle at a slightly lesser temperature than the core of the 3D pen. The latter method greatly influences and enhances the cooling time for extruded material. Pens featuring such a property are a better choice over pens that have the nozzle at the same temperature as the body.

Other Recommended Gadgets For You.

A 3D pen is the most interesting tool and enables time passing like anything. There are lots of options to buy a 3D pen around the world and these 6 are the best 3d pens, gathered from various nooks and corners around the world. All these pens are very appropriate and are high-end products. The 3Doodler has been around for a while now and is a people’s favorite. A very similar observation can also be made about the MYNT3D Pen.